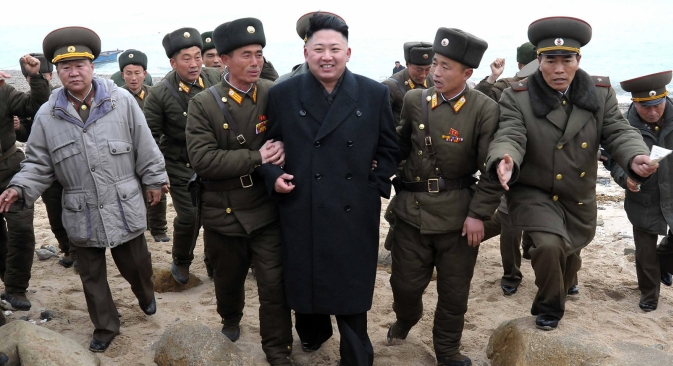 North Korean leader Kim Jong Un, center, walks with military personnel as he arrives for a military unit on Mu Islet, located in the southernmost part of the southwestern sector of North Korea's border with South Korea. Source: AP

The U.N. Security Council’s unanimous condemnation of North Korean missile and nuclear tests has shown that Pyongyang is becoming increasingly more isolated internationally. Still, no realistic proposals have been made so far on how to untie the North Korean knot.

On Mar. 7, the UN Security Council imposed new sanctions on North Korea, including the requirement that UN member states close their airspace to all North Korean aircraft suspected of transporting prohibited items.

Furthermore, all North Korean vessels that are believed to be transporting prohibited cargos across the territories of UN member states must now be inspected and can be denied port entry if they refuse to comply with the search.

Russian MPs do not think hostilities could start on Korean peninsula

The resolution also obliges UN member states to block any financial transactions and bulk cash transfers to North Korea. It prohibits the establishment of co-financed financial institutions and the opening of North Korean bank branches abroad.

Another provision bans the export to North Korea of jewelry, gemstones and yachts, as well as luxury and sports cars — somewhat mocking North Korean leaders who constantly plea for the international community to provide the country with more humanitarian aid.

“With the adoption of this resolution, North Korea will be subject to some of the toughest sanctions ever imposed by the United Nations. The breadth and scope of these sanctions is exceptional,” the U.S. permanent representative to the UN said on the topic.

However, the new restrictions do not solve the nuclear issues brought about by North Korea.

On Feb. 12, the country carried out an underground nuclear test. Unlike the two previous trials, this time it was not an explosive, but a warhead that can be mounted on a ballistic missile. North Korea has been producing missiles for some time now, and it also successfully launched a satellite this January. Apparently, the country has now also mastered intercontinental ballistic missile technology.

All this may deal another deadly blow to the non-proliferation of nuclear weapons and missile technologies, which is fundamental to U.S. foreign policy. Pyongyang has made an equality statement, likening itself — though only technically — to the United States. And it will not retreat without a fight.

This is why the United Nations’ calls for North Korea to start abiding by the Non-Proliferation Treaty and resume the so-called six-party talks on the denuclearization of the Korean Peninsula is just an old Security Council mantra that North Korea could not take any less seriously.

The January statement released by the North Korean Ministry of Foreign Affairs after the satellite launch made it clear that the country has not the slightest intention of discussing its nuclear program within the framework of the talks, which had been mildly successful in the last 10 years before they stalled in 2009. Now, denuclearization of the Korean peninsula is impossible, the North Korean foreign agency warned.

“Pyongyang has made it clear that denuclearization is out of the question — that North Korea is a nuclear power and will remain one until the whole world is denuclearized... which is not likely to happen any time soon. This is the reality that we have to accept,” said Georgy Toloraya, research supervisor on Korea at the Russian Academy of Sciences’ Institute of Economics.

Nevertheless, this does not mean that North Korea is not ready for negotiations. It is. However, it will only talk to the United States, from whom it wants some security guarantees — let’s not forget that the Korean War never formally ended. All they have is a ceasefire agreement that was signed some 60 years ago.

North Korean leaders referred to the ceasefire during a meeting in Pyongyang with the touring basketball player Dennis Rodman; they mentioned that they were looking for direct talks.

“I don’t think he wants to go to war with the United States. He wants Obama to do one thing: call him,” the former NBA star said about Kim Jong-un, following a meeting with the young North Korean leader.

The White House was not particularly enthusiastic about the idea.

“The United States has direct channels of communications with the North Korean government,” White House Press Secretary Jay Carney explained. “We have urged the North Korean leadership to heed President Obama's call to come into compliance with its international obligations.”

For the time being, no phone calls are expected from the United States. Instead, large-scale joint U.S.-South Korea military exercises are underway.

North Korea’s response did not take long: Its authorities said they reserved the right to carry out a pre-emptive nuclear strike, should such a need arise. Apart from that, the Committee for the Peaceful Reunification of Korea announced that “the Democratic People’s Republic of Korea abrogates all agreements on nonaggression reached between the North and the South,” and that North Korea, “will close the Panmunjom liaison channel.”

The Korean Central News Agency clarified that “all agreements of nonaggression,” have been nullified, including “the joint declaration [by the participants of the six-party talks on North Korea’s nuclear issues] on the denuclearization of the Korean Peninsula, which is now completely invalid.”

The news agency went on to say that “the Panmunjom liaison channel between the North and the South will be closed.”

Such a stance may seem harsh, but North Korea is most likely just preparing the ground for a new mechanism of negotiation — although it is using very risky methods to achieve this goal.

Aleksandr Vorontsov, who heads the Korea and Mongolia Department at the Russian Academy of Sciences’ Institute of Oriental Studies, points to the sharp escalation of tensions on the Korean Peninsula.

“It would be short-sighted to play this alarming situation down," he said. "However, we should not press the panic button and take all of these declarations at face value. Indeed, there has been an exchange of aggressive and bellicose statements. But, as of now, it’s nothing more than rhetoric. Although, these attacks are obviously based on some serious divides that tend to grow wider as the time goes by.”