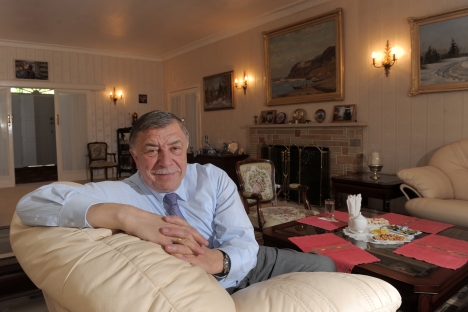 Russia's ambassador to Australia Vladimir Morozov: We have established close coordination across the main elements of the political landscape, and and regular ministerial consultations are held on Asia-Pacific Region matters. Source: Canberra Times

Russia's ambassador to australia speaks about the state of bilateral relations – from sharing space on the world stage to bringing the stars of the Bolshoi down under.

{***From Asia-Pacific context to economy and trade***}

In February this year, Russian President Vladimir Putin approved a new version of the Foreign Policy Concept of the Russian Federation, which focuses, among other things, on "intensifying relations with Australia" and "maintaining regular contacts and harmonious ties" with the island nations of the South Pacific.

Vladimir Morozov has been Ambassador Extraordinary and Plenipotentiary of the Russian Federation to the Commonwealth of Australia and to the republics of Fiji, Vanuatu and Nauru since 2010.

He graduated from the Moscow State Institute of International Relations of the Ministry of Foreign Affairs of the Soviet Union in 1972 and has been in the diplomatic service since then.

He has occupied various diplomatic positions within the Ministry of Foreign Affairs and has mainly focused on South-east Asia and the Pacific Rim.

He served two tours in the Soviet Embassy in Indonesia, and in 2000 was appointed Ambassador of Russia to Malaysia and concurrently to Brunei Darussalam. Morozov is married and has an adult son and daughter. He speaks English and Indonesian.

In an exclusive interview, Russia's ambassador to Australia, Vladimir Morozov, spoke about the positive dynamics of his country's relations here, and in Fiji, Nauru, Tuvalu, and Vanuatu – regions for which he is also responsible.

Russia Beyond The Headlines (RBTH): How is the relationship between Russia and Australia developing in the Asia-Pacific region (APR), the world’s most dynamic area?

Vladimir Morozov: We have established close coordination across the main elements of the political landscape, and regular ministerial consultations are held on APR matters. In the short term, the region could transform into one of the most influential poles in the global co-ordinate system.

Even more important is to neutralise the very real potential for conflict by creating a robust architecture of regional security and co-operation based on the principles of equality, the rule of international law, and the inadmissibility of securing one's own security at the expense of other states.

These provisions, which are laid out in the Russian-Chinese initiative (September 2010), are fully understood by our Australian colleagues.

RBTH: To what extend has the potential for bilateral economic cooperation been realised?

V. M.: Our potential has not been fully realised, but bilateral trade is growing steadily, rising from $A718.1 million in 2006 to $A1.662 billion last year. In 2011, Russian exports nudged over the billion mark for the first time.

RBTH: Is the Australian market open to Russian arms and dual-use technologies?

V. M.: The modern arms market is no longer determined by political allegiances, but product competitiveness. Australia has been closely following the latest Russian developments. Last year saw the certification of a fire-fighting modification of the Ka-32 helicopter. Russian delegations participated in land warfare and naval exhibitions as well as Avalon Airshow recently held in Geelong, Victoria.

RBTH: Russia and Australia's diplomatic relations date back to the alliance under the anti-Hitler coalition (the Arctic Convoy). Does Canberra today support Russia's efforts to accurately portray the history of the Second World War?

V. M.: Every year, meetings are held in Australia for World War II veterans, at which they recall the difficult war period and honour the memory of their fallen comrades. We greatly value the contribution of the Australian sailors and pilots who took part in the Arctic Convoy to deliver military and economic assistance to the Soviet Union.

RBTH: In matters of diplomacy, Russia practises the "2+2" format of interaction, whereby bilateral negotiations are held simultaneously between the countries' foreign and defence ministers. Will this format be used in Russian-Australian relations?

V. M.: In March 2012, following a visit to Australia by Russian Foreign Minister Sergei Lavrov, a new mechanism was launched to establish a strategic dialogue at the level of first deputy foreign ministers. It will allow us to regularly "synchronise watches" on many regional and international issues. The plan is to involve military experts, i.e. to work towards a fully-fledged "2+2" format.

RBTH: Do Russia and Australia, the latter  a non-permanent member of the UN Security Council in 2013-14, coincide in their approaches to UN reform?

V. M.: Canberra recently hosted consultations at the deputy foreign minister level on matters regarding the UN. Our two countries hold similar views: the final prescription of reform should be determined through negotiations with all countries. We do not support the idea of putting it to the vote, because that could polarise the international community.

RBTH: Are the countries in unison in the context of Russia's current and Australia's future presidency of the G20?

V. M.: I am pleased to note that we have established and maintained good contacts with the Australian departments responsible for G20 participation. In December 2012, Australia joined the "troika" mechanism (a loose alliance between the previous, current, and future holders of the presidency), which allows us to compare notes on key issues and ensure continuity of the agenda.

Our vision and long-term objectives for the G20 have much in common. For instance, one of Russia's priorities — promotion of economic growth and jobs — will be one of the main issues tackled under the Australian presidency.

RBTH: Australia is a multi-ethnic country created by immigrants. Can Russia, with its waves of migration, learn from Australia's experience?

V. M.: For decades, Australia has consistently maintained a multi-level system of national and ethnic associations, which, through their representatives, closely collaborate with government bodies, provide information, and find solutions to problems. We are studying the system and believe that Russia can draw a lot from it.

RBTH: How does the embassy engage with Australia’s Russian diaspora, which has been replenished by several waves of migration?

V. M.: In conjunction with the Council of Compatriots, we are doing all we can to ensure that expats from Russia and the former Soviet Union feel a historical and spiritual connection to their motherland.

Australia is home to a large Russian and CIS community, which is actively involved in Australian society and making an invaluable contribution to the promotion of Russian culture. Thanks to its members, every state has Russian schools, theatres, and folk groups. The main purpose is to preserve one's native language, culture and traditions. In that regard, I should mention the major role played by Orthodox parishes.

RBTH: Russia is fond of establishing years of cross-culture with other countries. Will there be any such exchange between Russia and Australia?

V. M.: The interest here in Russian culture and art has never abated. Every year, Australia's major cities host the Russian Ressurection Film Festival, which is already one of the largest Russian movie events abroad. In 2012, the Imperial, Eifman, and Russian National ballets all toured here.

Currently showing to wide acclaim at the Australian Museum in Sydney is the Alexander the Great: 2000 Years of Treasures exhibition, from the State Hermitage's collection. This year will see the Bolshoi Ballet perform in Brisbane and [in the future] another Hermitage exhibition, Catherine the Great, in Melbourne.

I would like to take our cultural co-operation one step further and establish a year of cross-culture in Russia and Australia, but it is not easy to implement. Incidentally, the Russian public would probably be interested in a presentation of Aboriginal art.

Moving beyond mining, metals and infrastructure?

Investments by Russians in Australia and Australians in Russia are not what they could be, said Vladimir Morozov, Russia's ambassador to Australia. But Mr Morozov was quick to point out that the investment climate is not to blame. Rather, the lack of interest in investments is more a result of the geographical remoteness of the two countries, the focus on traditional markets, and the poorly developed "information feed" regarding business opportunities.

The mining sector dominates Russian investments in Australia. Russia's aluminum giant Rusal owns 20 per cent of Queensland Alumina Ltd, one of the largest aluminum plants in the world, while Norilsk Nickel controls Lake Johnston and a number of other nickel assets. Magnitogorsk Iron and Steel Works (MMK) owns nearly 5 per cent of Australia's Fortescue Metal Group.

Experts value Russia's overall investment in the "green continent" at almost $A4 billion. Russian Uranium holding Atomredmetzoloto is extremely interested in the Australian market, having increased its assets in the Honeymoon uranium mine through the purchase of Canada's Uranium One and a 100 per cent stake in Mantra Resources Ltd.

Australian companies, meanwhile, are attracted to Russian infrastructure projects. For example, the bilateral initiative Macquarie Renaissance Infrastructure Fund has been set up with the backing of various Russian financial institutions. Tigers Realm Coal Ltd is developing the Amaamskoe coking coal deposit in Chukotka, and International Petroleum Ltd is involved in oil and gas projects in the Khanty-Mansiysk Autonomous District.

Amcor Ltd owns a number of subsidiaries in Russia, and Worley Parsons is engaged in some long-term projects in Russia, mainly related to engineering services and oil and gas development in Sakhalin. Overall, Australian investments in the Russian economy amount to about $A1 billion.