EU opens up to Russia on visa issue 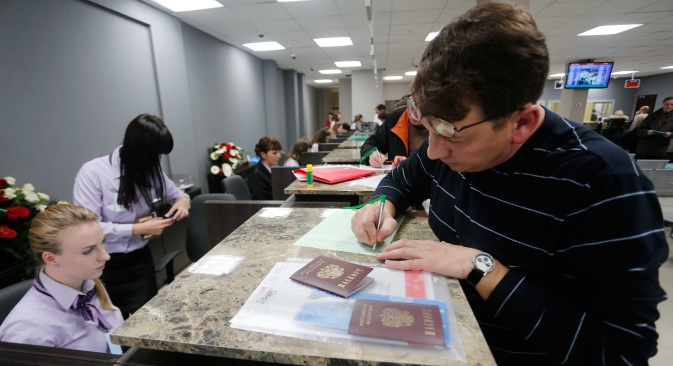 The EU-Russia agreement on the liberalization of the visa regime may be a catalyst for negotiations on scrapping visas. Pictured: A visitor files papers at Polish Visa Application Center in Kaliningrad. Source: RIA Novosti / Evgeniy Karasev

One of the main obstacles to the liberalization of the visa regime between the EU and Russia was removed when Brussels signaled that it was ready to grant visa-free entry to holders of Russian service passports.

The Russian Foreign Ministry has announced that it hopes to sign an agreement soon with Brussels, in order to ease the visa regime in the near future. The announcement comes after talks were held in Moscow on March 11 with the European Commission’s director general for home affairs, Stefano Manservisi. Manservisi signaled that the EU was willing to make concessions to Moscow and allow visa-free entry for holders of service passports.

“In late March, our colleagues from the Russian Foreign Ministry Consular Department will go to Brussels to dot all the i’s, so as to initial and then ratify the document in the near future. The outlook is good,” RIA Novosti news agency quoted the Russian Foreign Ministry’s roving ambassador, Anvar Azimov, as saying. Azimov is the chief negotiator with the EU on the visa issue.

The visa regime between the EU and Russia is still in force, with even short, tourist trips requiring visas. Many EU countries demand Russian citizens visit the consulate personally for a visa, even if the consulate is several thousand miles away from where they live.

For their part, the Russian authorities have recently been demanding that EU citizens provide proof of their financial solvency — in the form of income verification letters, for example.

Both sides realize that this is an unnatural situation. Visa talks between Russia and the EU are proceeding along two tracks: the first is to sign an agreement to facilitate the visa process; the second is connected with scrapping visas altogether. There are signs of a breakthrough on the first issue.

Service passports for foreign travel are issued to ordinary employees of diplomatic missions and consulates, the staff of missions to international organizations, servicemen sent abroad, federal and regional civil servants, employees of state corporations and the Russian Central Bank, the presidential, governmental and State Duma staff and other civil servants not entitled to diplomatic immunity. Possession of a service passport confers no privileges in Russia. However, under intergovernmental agreements, Albania, Angola, Bulgaria, Hungary, India, Cyprus, Mexico, South Africa, South Korea and some other countries allow visa-free entry to holders of these documents, according to Kommersant.

Russia was ready to sign an agreement on the liberalization of the visa regime as early as summer 2012, but the talks stalled over a single issue: Brussels did not agree with the clause that would abolish the requirement for holders of service passports to get a visa, because it doubted that service passports were issued only to persons entitled to hold them.

Germany had objected the loudest to the inclusion of the clause in the new agreement, but it withdrew its objections last week, Kommersantreports.

During the recent talks in Moscow with the Russian Foreign Ministry’s Consular Department, the EU’s director general for home affairs confirmed that the issue of granting visa-free entry to the holders of service passports would soon be solved.

“We asked ourselves just how necessary it was. Apparently, including the holders of service passports is a fair request. There is some progress; the member countries are studying the proposal. We hope that the issue will be solved within weeks,” said Manservisi.

There are also signs of progress on completely scrapping the visa regime between Russia and the EU. Moscow and Brussels have agreed to publish a list of joint steps to be taken in this regard, and a mission of EU experts will visit Russia on April 8–12 to discuss migration risks, the fight against terrorism and cooperation between law enforcement bodies.

Diplomats hope that the two sides can sign a visa-free regime by late 2014 at the earliest. However, unofficially, 2018 is mentioned as the most likely date.

Alexander Rahr, a German political scientist and research director at the German-Russian Forum, noted that Russia-EU summits take place twice a year, and one quarter of the agendas for these meetings is taken up by the visa regime. “At the end of the day, visas between Russia and the EU will be abolished. Abolishing visas is the long-term goal, although the press has been giving various dates of the introduction of a visa-free regime,” Rahr said.

The German political scientist told RBTH that it is still too early to speak about completely doing away with visas between Russia and the EU. “The EU would like to see what will happen in Russia. Russia is expected to simplify registration procedures for European Union citizens,” said Rahr.

Dmitry Polikanov, a Russian political scientist and vice president of the Russian Center for Policy Studies, believes that an agreement on the liberalization of the visa regime may at least be a catalyst for negotiations on scrapping visas. “Both sides stand to gain from a visa-free regime with Europe,” said Polikanov.