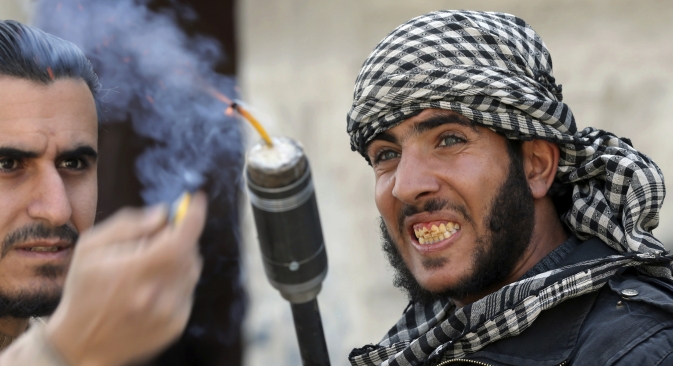 Fighters from the Free Syrian Army's Tahrir al Sham brigade use a shotgun to fire an improvised grenade at Syrian Army soldiers in the Arabeen neigbourhood of Damascus February 9, 2013. Source: Reuters

Russian political scientists speculate that increasing instability in the Arab world could further exacerbate the Syrian conflict and heighten tensions in the Middle East.

The Syrian conflict has taken on a regional scale since it broke out two years ago, Russian political scientists said, adding that the chance of restoring stability in the Arab world is several generations away.

"The risk that this conflict will spread further certainly exists. It is totally obvious that the conflict has been expanding and will continue to expand. This escalation will grow even more acute, and no one is able to predict how all this will end," Vyacheslav Nikonov, first deputy chairman of the State Duma Foreign Affairs Committee, told Interfax.

Even the West is seriously troubled by this situation because it clearly understands what consequences radical Islamists' success would entail, he said.

"It will be a very long, complicated and swampy struggle in which [Syrian President Bashar] al-Assad will hardly manage to stand his ground," Nikonov said. "But the alternative looks far worse. The only change is that the West's vigorous support for the [Syrian] opposition has made him treat the opposition more carefully. The consequences of radical Islamists' possible success are well understood."

The Syrian conflict is de facto spreading to Iraq and Lebanon, director of Russia's Institute of the Middle East Yevgeny Satanovsky told Interfax.

"The conflict has already taken on a larger scale, and it is currently spreading to Iraq and Lebanon. The prospects are clear: the civil war has become irreversible. And it is no longer important whether al-Assad will be deposed or not, whether some other Alawite leader will replace him," he said.

"Different communities are involved in this massacre," Satanovsky said, adding that the conflict could last for decades.

"Generally speaking, the blame for it partly lies with Saudi Arabia, Turkey and the Western bloc. What happened as the "Arab spring" will start to subside only in 70-80 years," Satanovsky said.

The processes underway in the Arab world indicate that the secular system is starting to collapse in the region, the analyst said.

"All statehood-linked institutions are being ruined in the Arab world, primarily the secular system of governance. Algeria alone remains intact for now. If they manage to break Syria, the entire region will be split into alliances of tribes, clans and territorial entities. In fact, we are witnessing a demise of the post-colonial system," he said.

The monarchies of the Arab world, including Saudi Arabia, will most likely collapse as well, the analyst said.

"The exclusively monarchical bloc remains so far. But will it last for long? Saudi Arabia is cracking at the seams. Bahrain's collapse is more than realistic. The system that was once stable has been ruined. One of the main conclusions is that rival authoritarian and secular regimes have been destroyed for the benefit of Islamists," he said.