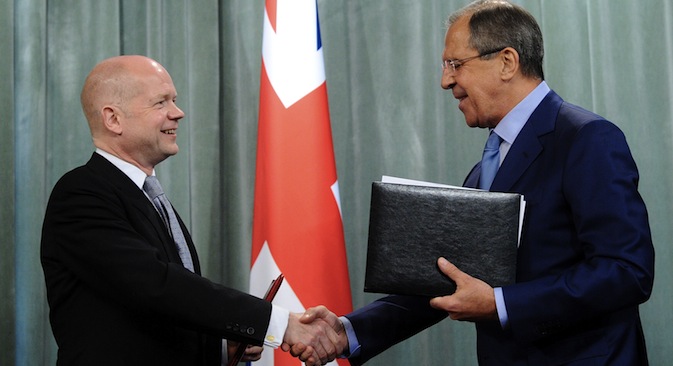 The foreign and defense ministers of Russia and the U.K. have opened up frank discussions on key issues in the “two-plus-two” format, which is unprecedented in relations between the two countries. At the Inaugural U.K.-Russia Strategic Dialogue, the two countries discussed Syria, the Olympics, and human rights, among other things.

The Inaugural UK-Russia Strategic Dialog, in the form of joint foreign and defense ministerial talks on March 13, 2013, in London, was both frank and productive – although some disagreements remained.

The Syrian question became the main topic of discussion between the two countries, whose relations have been rocky over the past seven years.

Hague unhappy about lack of progress in probing Magnitsky death

“Today we discussed in a frank and constructive manner our bilateral relations, as well as a number of regional and international issues. We tried not to gloss over acute or blunt angles, but to consider even the most complicated issues openly and in a spirit of partnership – whether it was a concern over human rights or the slow progress on extradition of certain prosecuted Russian citizens who are currently in the U.K.,” Russian Foreign Minister Sergei Lavrov told a press conference following the meeting.

British Foreign Secretary William Hague called the talks “an important milestone” in the strengthening of working-relations between the U.K. and Russia.

“It’s very important to note that, as two, fellow, permanent U.N. Security Council members, it is vital for us to work together on a wide range of subjects. And we discussed those subjects today. Such as the work we’ve been doing in the U.N. Security Council to secure peace and stability in Somalia, Yemen and Sudan,” Hague said. “We welcome this format.”

The London talks between the Russian and British foreign and defense ministers were organized at the behest of the countries’ leaders – President Vladimir Putin and Prime Minister David Cameron – as part of an effort to build a bilateral dialogue.

Ties between Britain and Russia have been strained since the 2006 death of former KGB agent Alexander Litvinenko in London. Moscow has refused to extradite Andrei Lugovoi, whom the British government believes to be responsible for the murder.

The situation in Syria was the main topic of discussion at the talks. Both Russia and the U.K. are calling for an end to the conflict through negotiations.

“Both our countries seek an end to the appalling suffering and to the instability; we both support a political transition in Syria, on the basis agreed in Geneva last year,” Hague said.

There are serious disagreements, however, over how exactly this should be achieved – in particular, whether it is necessary to insist that Syrian President Bashar Assad step down.

The British foreign secretary said that, “as long as a political transition is not found, we will increase our support for the opposition and the Syrian people, to try to save lives.”

According to media reports, London has already decided to increase the aid to Syria by $20 million.

Lavrov, on the other hand, recalled the outcome of the active support given to Libyan rebels by their European allies. Some of the weapons shipped to Libya ended up in the hands of terrorists, whom the Europeans are trying to deal with now in Northern Africa.

In his answer to a question on whether the meeting succeeded in bringing the positions on Syria closer, the Russian foreign minister said this:

“We have a common ground for further action – the Geneva Communiqué. It calls on the government and the opposition to form negotiating teams and agree on establishing a ‘transitional governing body’ that would exercise full executive powers and prepare free elections. This communiqué doesn’t contain any preconditions about the need to remove Bashar Assad from the post of Syria’s president.”

Hague noted that the parties would continue their efforts to reach full agreement on the disputed matters.

The agenda of the talks was not limited to Syria. The ministers also discussed the Iranian nuclear program, Afghanistan security and the situation in Mali. The British side also shared their experience of ensuring public safety at the Olympics.

Observers have pointed out that, however modest the results of the talks might seem, the most important thing is that a normal dialogue – cut short after a sharp cooling of relations several years ago – has now resumed. The meeting allowed the Russian ministers to speak frankly.

2014 has been announced as the Russian year of culture in the U.K.

“I hope this will foster greater links between the people of our countries,” Hague said.

Russia and the U.K. have decided to hold such talks annually. The next meeting in the two-plus-two format will take place in Moscow.

This article is based on reports by Rossiyskaya Gazeta, Vesti, Channel 5 and RIA Novosti.