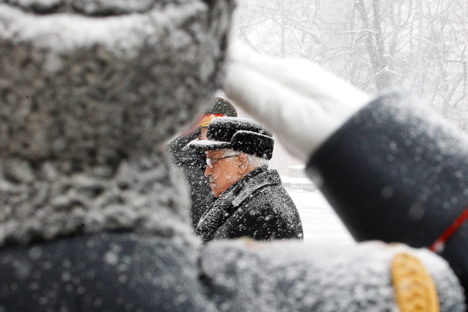 After the president of the Palestinian National Authority, Mahmoud Abbas, arrived in Moscow last week, he sat down with Rossiyskaya Gazeta to talk about the Quartet on the Middle East and the outlook for Palestinian-Russian relations.

The president of the Palestinian National Authority, Mahmoud Abbas, arrived in Moscow on March 13. The next day he sat down with Russian President Vladimir Putin to discuss the situation in the Middle East and Palestinian-Russian relations, the very issues he talked about during the interview with Rossiyskaya Gazeta.

Rossiyskaya Gazeta (RG): What events of the past few years have been the most important for Palestine in your opinion?

Mahmoud Abbas: It is with great love and affection that we look back on President Medvedev’s visit to Jericho, during which he paid a call to the Jericho Russian Museum. Many other events have taken place since then, with Putin’s visit to Bethlehem being one of the most important.

The United Nations General Assembly granted Palestine an observer status a couple of months ago, which is an important milestone on the path of establishing an independent Palestinian state.

RG: What are the practical implications of the UN observer status for Palestine, and how will it impact the situation in the Middle East?

M.A.: After [the UN resolution], the whole world understood that the land seized by Israel in 1967 is the territory of an occupied state.

This means that the Fourth Geneva Convention, which states that “the Occupying Power shall not deport or transfer parts of its own civilian population into the territory it occupies,” is applicable to them. This is a big victory for us.

In another important development, we can now apply to become full-fledged members of all official specialized international organizations.

RG: What is the main condition for achieving a Palestinian-Israeli settlement?

M.A.: We aspire to a settlement based on international legal acts – the road map for peace and the U.N. resolutions. The ball is now in Israel’s court.

If the Israeli leadership understands and believes that they need peace as we and other countries do, I’m sure we will be able to achieve a resolution to the conflict.

RG: Revolutions and regime changes have swept through a number of Arab countries. What effect have these events had on the foreign policy of your state?

M.A.: Our position is clear and firm: We don’t interfere in the internal affairs of Arab or non-Arab countries; we stand together with the peoples of those countries and support their aspirations, especially in Syria. Syria is home to 600,000 Palestinians.

In the next few days, I will send a delegation to Syria that will work under the banner of non-interference in Syria’s internal affairs. All we want is to defend our people, the Palestinians, and our camps from attacks from both sides of the conflict.

RG: Will your delegation negotiate with the Assad government only or with the opposition as well?

M.A.: The delegation is traveling to Syria to meet with the Syrian leadership and engage in a dialogue with the Syrian government about the situation of Palestinian refugees there. Assad’s government is the legal authority in Syria, and we are guests in Syria where this regime rules.

RG: The so-called “Quartet” of intermediaries has been busy trying to settle the Arab-Israeli conflict for a number of years. Russia is a member. What’s your assessment of this institution?

M.A.: The four-party commission established by Russia, the United States, the EU and the U.N. successfully developed the road map for peace to resolve the Middle East conflict.

This plan should have been implemented, because it had been approved by the U.N. Security Council and nobody could challenge it. We believe that it will be implemented.

I’d like to say – and this is not a mere compliment to Russia – that your delegation has always consulted with us on all matters and has always accommodated us in resolving all issues related to the Quartet’s work.

Unfortunately, the commission has not operated for almost a year. We hope that this mechanism resumes its work and plays its designated role in a peaceful settlement.

RG: In which areas are Russian-Palestinian relations developing successfully, and which areas still have unrealized potential?

M.A.: My first visit abroad was to Russia, because Russia has historically – since the Soviet era – maintained warm relations with Palestine and has always defended our interests. Since then, we have been in constant contact with Russian representatives: either we traveled to Moscow, or they came to visit us.

We would like to continue exchanging views with the Russian leaders on all matters – there are no secrets between us.