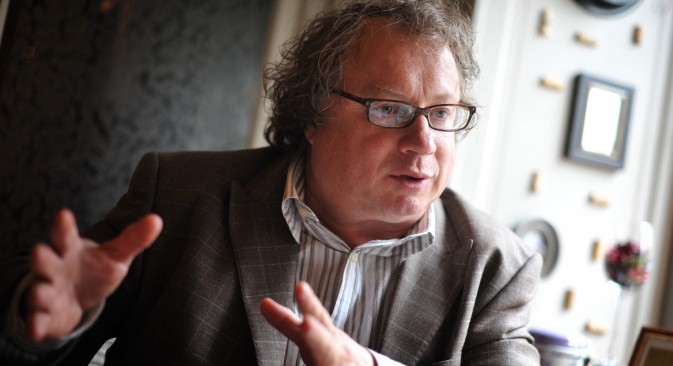 Nikolai Zlobin: "We are out of fresh ideas and we suffer from a lack of vision.…This is why I wanted to start a new research organization in Washington, D.C., which will potentially be global.” Source: PhotoXPress

Nikolai Zlobin, a bestselling author in Russia with longtime ties to the U.S., launches an independent think tank on U.S.-Russia relations to foster the collaboration between two countries and overcome the Cold War thinking.

Nikolai Zlobin, the Russian political analyst who wrote a compassionately amusing bestseller about Americans for a Russian audience, is putting his cross-cultural experience to a new test. The engaging journalist and author of the 400-page “America—What a Life,” has launched a think tank to focus on “fresh thinking” for the much-beleaguered Russian-American relationship.

Russian-American relations set for a pause

Who better to resuscitate the reset than the man who explained to Russians why busy American grandparents don’t babysit much (“they definitely don’t live with their grandchildren”) and why Americans find Russian parties too loud and too long (“If Russians celebrate something, they do it so that the neighbors will not know what hit them”).

On March 12, Zlobin officially opened the doors to the Center on Global Interests (CGI) and found himself surrounded by a core group of heavy-hitting supporters, from Ambassador Thomas Pickering to Russian Ambassador Sergei Kislyak.

At the event, Ambassador Pickering said that he hoped Zlobin would “do a little bit of rat killing for the bilateral relationship between the U.S. and Russia” and said the think tank could be crucial in helping to get rid of hangovers from the Soviet era.

Zlobin, president and founder of CGI, joked about the audacity of starting yet another think tank in D.C., a town already chock full of groups on Massachusetts Avenue and its environs that tout strategic thinking.

“It might seem a bit strange to organize a think tank in Washington, D.C., when the field is already overcrowded,” Zlobin said in his introduction. “But on the other hand, we live in a time when global elite thinking is characterized by a certain impotence. We are out of fresh ideas and we suffer from a lack of vision.…This is why I wanted to start a new research organization in Washington, D.C., which will potentially be global.”

“At first, I thought who needs one more think tank in D.C.?” Zlobin said with a laugh. But then he said he thought about it, and how he could “try to create an organization that goes beyond Cold War thinking, to break down stereotypes. This is a dangerous kind of adventure, I suspect,” he added.

“I sometimes take a very critical view of Russia. …I do not accept [U.S. or Russian] government money, and I am trying to be as independent as possible.”

Russian Ambassador Kislyak said that “we need to focus on the things that are important to both countries, and strategic analysis is essential for the realization of this goal.”

Recently, Zlobin told the Economist magazine that Russian legislators today suffer from an “old illness” in which “you cannot be wrong in proposing something too extreme.”

Zlobin noted that anti-American sentiment and anti-Western thinking in Russia, as well as anti-Russian thinking in the U.S., have become self-perpetuating.

Bruce Blair, chairman of the CGI Board and founder of the World Security Institute, said that he is looking forward to “great efforts to collective understanding. We need to work much harder at this cooperative game.”

Mark Medish, president of Guggenheim International, is head of CGI’s expert task force on the Russian Presidency of the G20.  Medish praised Zlobin for his independent voice.

“Nicolai is being turned from a phenomenon into an institution,” Medish said.

The research institution will contribute analysis aimed at promoting mutual understanding among policy makers, journalists, educators and the general public. Programs include global governance in the 21st century; Russian presidency of the G20; U.S.-Russian bilateral relations; a task force of “rising experts” that will meet once a month; and America’s changing place in the 21st-century world.

CGI already held a roundtable this month on the Russian presidency of the G20 and the challenges for the leadership as it prepares for the summit in St. Petersburg this September.