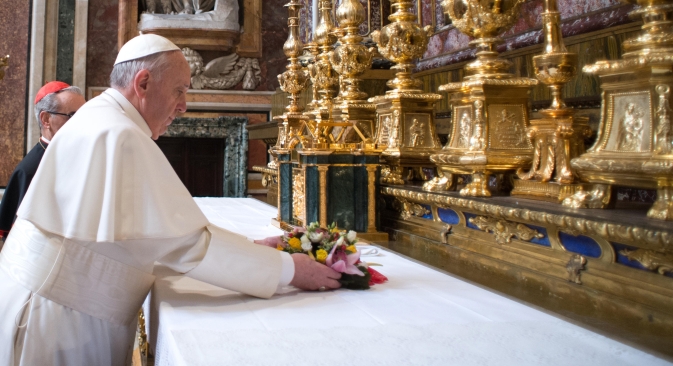 With Pope Francis's impending inauguration, Russian Orthodox believers are eager to develop their relationship with Catholics.

The election of Cardinal Jorge Mario Bergoglio to the papal throne has been warmly greeted in Moscow. Representatives of the Russian Orthodox Church believe that administrative disagreements between the Orthodox and Catholic churches might now be overcome. Russian Catholics are even expressing the hope that Pope Francis “will be close to contemporary Russian spirituality.”

“The new pontiff is a very distinguished church leader,” said Metropolitan Hilarion of Volokolamsk, head of the Department for External Church Relations of the Russian Orthodox Church, commenting on the pope’s election. “It’s probably no accident that he is the first pope to take the name of Francis – undoubtedly in honor of Francis of Assisi, who is revered in the Roman Catholic Church as an example of Christian poverty, humility and service to the poor.”

The metropolitan said that service to the poor and needy is a priority for churches today, and the Russian Orthodox Church has a major focus on this.

“We see a big area here where we can work together with the Roman Catholic Church,” said Hilarion. “I hope this alliance between us will develop under the new pontiff.”

“We hope that Francis will give a boost to the development of the relationship between our churches, which started under his predecessor,” said Archpriest Dimitry Sizonenko, secretary for inter-Christian relations of the synodal Department for External Church Relations. “He [Bergoglio] once said that he loves Dostoyevsky, and one would like to hope that he also loves the spiritual traditions of Russian Orthodoxy.”

People who know the new pontiff personally say that an improvement in the relationship is quite possible.

“When he was Archbishop of Buenos Aires, Jorge Mario Bergoglio regularly visited the Orthodox church on Christmas Eve,” said Bishop John of Caracas and South America, whose seat is in Buenos Aires. According to the bishop, this shows that “the new pope has a very good attitude toward Orthodoxy and Orthodox believers.”

“The newly elected pope knows the Byzantine Christian tradition well, since he had members of the Greek Catholic Church in his care in Argentina and is therefore very familiar with Orthodox–Catholic relations,” said Father Igor Kovalevsky, general secretary of the Conference of Catholic Bishops of the Russian Federation.

According to Igor Baranov, who works on the editorial staff of The Catholic Encyclopedia, Pope Francis “is close to the Orthodox position on matters of public morality (marriage, abortion, euthanasia).”

The tension in relations between the Vatican and the Moscow Patriarchate arose at the beginning of the 1990s, when Greek Catholics in Ukraine seized Orthodox churches. Despite the positive forecasts, both sides still note that it is too early to talk about the possibility of a meeting between Pope Francis and Patriarch Kirill.

“A meeting between the new pontiff and the patriarch is likely to happen on neutral territory and only when the Russians are ready for it,” said Kovalevsky.

“I think such a meeting is possible, but the time and place will depend most of all on how quickly we can overcome the conflicts that occurred in the late 1980s and early 1990s,” Hilarion said.

The metropolitan acknowledges, however, that “the [newly elected] pope has more than once testified to his spiritual sympathy with the Orthodox Church and his desire for close contacts with it.” Hilarion’s first meeting with Pope Francis will be in the Vatican, where the new pontiff will be inaugurated on March 19.