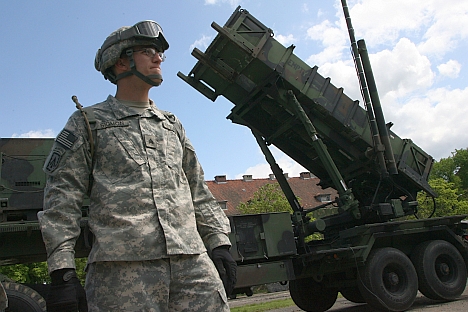 A battery of the American Patriot air defense missiles deployed at the Polish town of Morag, some 60 km from the border on Russia's Kaliningrad Region. One hundred American soldiers arrived with the missile systems. Source: RIA Novosti / Igor Zarembo

With the U.S. scrapping the fourth phase of its ABM shield in Europe and considering an expansion in the Pacific, Russian experts wonder what lies beneath the move: a concession to Russia, a response to the North Korea threats or the U.S. budget deficit?

The U.S. is scrapping the fourth phase of its ABM shield in Europe and considering sites in the Pacific instead, U.S. Defense Secretary Chuck Hagel announced in March. Experts are divided on whether this is a concession to Russia, an answer to threats from North Korea or a response to the U.S. budget deficit.

To counter the threats emanating from Pyongyang and Tehran, the U.S. plans to site 14 interceptor missiles in Alaska and California (bringing the total to 44), build a second radar station in Japan, and explore the possibility of a third facility for silo-based missiles on U.S. soil, announced U.S. Defense Secretary Chuck Hagel in mid-March.

Opinion: U.S. Defense Department leak may be a signal to Moscow

Russia worried about U.S. plans to set up missile defenses in the East

Furthermore, as reported by Kommersant, the diplomat remarked that even a truncated, European missile-defense shield could still pose a threat to Russia's nuclear capability.

In response to this move, the Russian Ministry of Foreign Affairs sees no reason to adjust its position on U.S. missile-defense, stated Deputy Foreign Minister Sergei Ryabkov.

"This is not a concession to Russia, and we do not perceive it as such. All aspects of the strategic uncertainty surrounding U.S. and NATO missile-defense remain. Accordingly, our objections shall remain in force," said Ryabkov in an interview with Kommersant.

The Pentagon's decision is a natural response to North Korea's recent nuclear test, says Vasily Kashin, an expert at the Center for Analysis of Strategies and Technologies. Judging by the statements made by North Koreans officials, their intention was to test a warhead capable of being delivered by missile. In conjunction with the recent satellite launch, the threat is moving from the virtual to the real.

According to Kashin, the U.S. believes that North Korea's satellite now gives it a range of about 4,040 miles, which already puts Alaska at risk. The redeployment of the fourth phase of the European missile-defense shield to the coast of the United States is only part of the countermeasures, since missile defense is merely a safeguard. Clearly, the strike capacity of U.S. forces in Northeast Asia will also be enhanced, Kashin surmises.

Moreover, whereas Russia has a more relaxed attitude toward U.S. missile deployment in Asia than in Europe, this is of grave concern to China — such a shield poses a serious threat to China's few and obsolete intercontinental ballistic missiles (ICBMs), the expert says.

The fourth phase of deployment had unnerved the Russian military, since it was set to be the stage at which the system could have undermined Russia's deterrent, notes Fyodor Lukyanov, chairman of the Council on Foreign and Defense Policy.

The Pentagon's recent decision has nothing to do with Russia, according to spokesperson George Little. If relations with Russia pick up as a result, so be it, an anonymous U.S. official told The New York Times.

Moscow, for its part, is hinting that no fundamental changes will ensue.

It follows from reports — as well as from a source close to the Russian Ministry of Defense — that the transfer of the fourth phase of deployment of the anti-ballistic missile shield from Europe to the U.S. is just a response to the clear and present danger of the budget deficit. This means there is nothing to prevent the U.S. from continuing to unroll the ABM shield in Europe, should the budget problem be resolved.

Moreover, a source for Vedomosti indicates that the fourth phase was set to deploy SM-3 Block IIb ABMs, which, according to U.S. statements, besides having the ability to intercept medium-range missiles, would have posed a threat to ICBMs launched from Russia's European territory.

The U.S. decision should be treated with caution, and Russia must obtain firm legal guarantees that the ABM system is not aimed at curbing its deterrent capability, insists the first deputy chairman of the Defense Committee, Viktor Zavarzin.

Meanwhile, the chairman of the Foreign Affairs Committee in Russia’s State Duma, Alexei Pushkov, asserts that the decision will have very little impact on the situation, since the main problem of the European missile shield — Russia's non-involvement — will remain.

Moscow's main concerns have not been addressed. It is still unclear as to why the threat of Iran and North Korea needs to be countered by facilities in Poland, and why it is not possible to create a joint system with Russia.

In addition, the relocation of the system to Alaska proves Russia's point and exposes the false reasoning of  American officials, who have repeatedly stated that the system must be deployed in Europe to defend against Iran and North Korea, says Pushkov.

Although the fundamental differences have not been ironed out, the U.S. decision does allow an element of détente, Lukyanov suggests. In principle, however, the two sides are resolute: The U.S. will continue to roll out its ABM system, while Russia seeks to up its response.