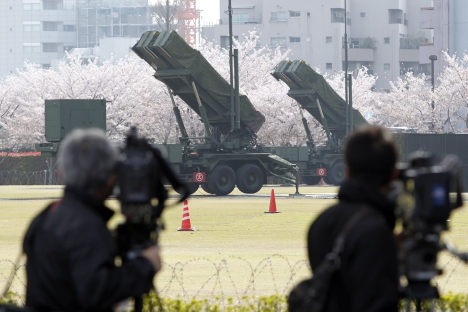 The U.S. announced that the cancellation of the fourth phase of its AMB in Europe would allow resources to be shifted to Asia from Europe. Pictured: The U.S. "Patriot" missiles units at the Defense Ministry in Japan. Source: AP

Although some Russian experts argue that Washington’s decision to cancel the final stage of its ABM in Europe is a reaction to Russia’s strong opposition, the U.S. denies these assumptions.

Some experts believe Washington’s decision to cancel the final stage of its European-based missile defense project is a reaction to Russia’s strong opposition. However, the U.S. denies its decision is related to Russia, and Russia still seeks legal reassurance that U.S. missile defense does not threaten its strategic nuclear forces.

Opinion: U.S. Defense Department leak may be a signal to Moscow

U.S. Defense Secretary Chuck Hagel said in mid-March that the cancellation of the fourth and final phase of the U.S. missile defense system based in Europe would allow resources to be shifted to Asia from Europe. He told reporters that the missile threat from North Korea prompted the U.S. to add 14 new anti-missile interceptors in Alaska.

“This will increase the number of ground-based interceptors to 44 from 30, including four in California,” said Hagel.

In addition, the U.S. will provide Japan with an additional radar possibly create a third silo-based missile defense base on its own territory.

As for European defenses, the U.S. is canceling the phase of the project that has been criticized by Moscow. The U.S. has no more plans to deploy SM3-IIB interceptors, which would be capable of engaging Russian intercontinental missiles near the Russian state border in Poland.

It seems that the U.S. is ready to meet Russia halfway. It was Russia that demanded its missiles not be threatened, as this might have compromised the strategic parity and result in a new arms race.

Last year’s meeting between U.S President Barack Obama and then Russian President Dmitry Medvedev comes to mind: The U.S. president promised to show more flexibility in missile defenses after his election campaign and asked that Vladimir Putin be informed of this. Obama was caught by a live microphone then and his administration had to come up with excuses.

However, Hagel has stated that the Pentagon’s recent decision is not connected with Russia. A senior administration official who spoke to the New York Times on the condition of anonymity made a milder statement on the issue.

“If there are side benefits that accrue with Russia, so be it. But that wasn’t a primary driver,” said the source.

Nonetheless, the decision to cancel some of the European-based defenses is in line with Moscow’s demands not to deploy anti-missile systems near its border. Chief of General Staff Nikolai Makarov referred to this when speaking at an international conference on anti-missile defense in Moscow last May.

Steven Pifer at the Brookings Arms Control Initiative believes that “nothing threatens Russian missiles now.” Even so, this is clearly not enough for a breakthrough in the prolonged confrontation between Moscow and Washington over missile defense systems.

When commenting on Washington’s statements, Deputy Foreign Minister Sergei Ryabkov noted that the elements of the anti-missile shield planning to be deployed by the U.S. as part of the first three phases are highly mobile.

“They will be deployed on ships, which can move between water areas within days. The land-based elements are mobile, too,” the diplomat said. This means there is still a threat to the Russian missile potential. Moscow is still seeking “legally binding agreements that all elements of the U.S. missile-defense system are not aimed at Russian strategic nuclear forces.”

The decision by the U.S. sets the stage — at least psychologically— for resetting the dialogue on anti-missile defense, which had reached a stalemate and started poisoning the already tense relationship. Fyodor Lukyanov, chairman of the Council on Foreign and Defense Policy, believes that the Russian side should welcome the move, whatever the motives.

“Judging by Moscow’s response, however, it seems that there will be no dramatic changes in Russia’s approach to missile defense systems,” said Lukyanov.