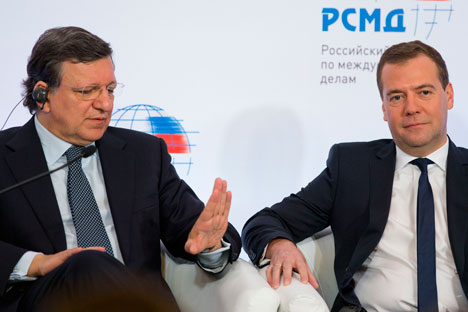 Chairman of the European Commission Jose Manuel Barroso (left) mentioned “human rights in Russia” as one of the key problems that is stalling negotiations. Source: AP

The high-level “Potential for Partnership” meeting was held virtually 10 years after the milestone, Russia-EU summit in St. Petersburg on May 10, 2003 — the summit that launched the “visa-free dialog.” A decade later, the parties are still struggling to resolve the problem of abolishing visas.

“Unfortunately, we cannot resolve the visa problem, and that is one of the main barriers to development of human capital. It holds back entrepreneurial activities and links between people, and [it] stands in the way of scientific and cultural contacts,” Russian Prime Minister Dmitry Medvedev said. “Let us face it: Russia is still perceived in the majority of European countries as something external and separate from the rest of Europe.”

Russia’s isolation was also mentioned by Austria’s former Federal Chancellor Wolfgang Schussel. However, in the opinion of Vladimir Chizhov, Russia’s permanent representative to the EU, this view is not entirely correct. “Russia has been and remains connected to Europe — and not only by gas and oil pipelines, but also by people and business. In spite of the existing problems, there is no question of isolation, merely of some misunderstanding,” Chizhov told RBTH.

Chairman of the European Commission, Jose Manuel Barroso, mentioned “human rights in Russia” as one of the key problems that is stalling negotiations.

“I would not equate human rights and visas,” said Chizhov. “This is a serious element of our political dialog with mutual concerns — human rights in Russia and in Europe. And a third point: We are working on human rights at the international level."

"The European Union has assumed an obligation, enshrined in the Lisbon Treaty, to join the European Human Rights Convention," he said. "This has not yet been done. All the European Union countries have joined the Convention as nations but, when the question arises in Strasbourg of the liability of European Union institutions that may be sued, it is unclear whom to sue. The problem directly affects our interests and those of non-EU countries.”

In addition, many are concerned about the fallout from the Cyprus crisis, in terms of relations between Russia and the EU.

“I don’t think that the Cyprus issue is important enough to spoil the relations between Russia and the European Union,” former French Prime Minister Francois Fillon told journalists.

Prime Minister Medvedev expressed surprise at the “unpredictable and inconsistent” schemes being proposed as solutions to financial problems in Cyprus.

“I think the future plan for settlement around Cyprus could be considered by the Euro group, with the participation of all interested parties — including Russian structures,” said Medvedev.