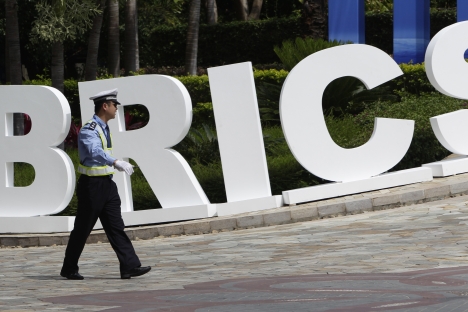 Moscow views BRICS as one of the top priorities of its foreign policy. Source: Reuters

Russian Foreign Ministry has released an official strategy for Russia’s participation in the BRICS association. The document stresses the need to turn the bloc into a comprehensive institution for daily cooperation on key global issues

The Kremlin and Russian Foreign Ministry have released an official strategy for Russia’s participation in the BRICS association. The document stresses the need to turn the bloc into a comprehensive institution for daily cooperation on key global issues. In particular, Russia is looking forward to working with other BRICS nations to restructure global financial institutions.

Russia has unveiled its strategy of cooperation with the BRICS countries ahead of the bloc’s summit in Durban, South Africa, which will be held on March 26-27. The document was made available on the websites of the Kremlin and the Russian Foreign Ministry. Deputy Prime Minister Sergey Ryabkov has stated that the strategy was approved by President Vladimir Putin back on Feb. 9.

According to the document, which is entitled “Concept of the Russian Federation’s participation in BRICS,” Russia wants the bloc to be seen as “a new model of global relations, which supersedes the old division lines between the East and the West, or between the North and the South.”

The document lists Russia’s key objectives, among which the main one is “a transformation of BRICS from a forum for dialogue […] into a comprehensive mechanism of strategic and day-to-day cooperation on key issues of the world economy and politics.” As far as Russia is concerned, BRICS is a non-military bloc, but it can make a contribution to strengthening international security.

Other Russian objectives include facilitating closer cooperation between BRICS and the U.N., safeguarding and strengthening the role of the U.N. Security Council, and preventing the use of the U.N. for legitimizing the policies of regime change and use of force to resolve conflicts.

“The BRICS association will continue to strengthen its international reputation and influence by using soft power — i.e., through economic and social achievements of its members, as opposed to creating some kind of military alliance,” Ryabkov said. He added that the BRICS nations already have a common platform that can be used as a starting point for reforming the global financial and economic architecture.

More specifically, the focus is on the redistribution of the quotas and votes in the IMF and the World Bank.

The combined economic weight of the BRICS countries has been growing rapidly in recent years. In 2011-2012 the BRICS economies grew by 7.5 percent, compared to the 1.5-percent growth demonstrated by the G-7 countries. That shift in the relative global weight must be reflected in the international financial institutions, in the opinion of BRICS nations. The G20 — where Russia is currently holding the rotating presidency — has accepted such a proposal and it must now be implemented by 2014.

Asked by RBTH whether the BRICS nations were preparing to use currencies other than the U.S. dollar in their mutual trade, Ryabkov said that “abandoning the dollar is not a realistic prospect at this moment.” He added, however, that the BRICS countries were already in a position to begin intra-BRICS payments in their own national currencies.

Another idea being discussed is to set up a BRICS currency pool, a portion of which could be used to service mutual trade. In addition, the five countries could increase the share of each other’s national currencies in the reserves of their central banks. The more diversified the currency reserves are, the more resilient these countries will be to volatility on the currency markets.

During the Durban summit, the BRICS leaders will also discuss proposals to set up a development bank, a standing business council, and a science and research center. According to Ryabkov, “it is all up to the five leaders” since the proposals have already been agreed at the level of experts.

Finally, the Durban summit will launch the so-called virtual secretariat of the BRICS bloc.

“We are not artificially stimulating the institutional growth of BRICS,” Ryabkov said. “Our approach is based on the notion that there are influential international bodies — such as the G20 or the G8 — which work very effectively without creating an unwieldy bureaucracy or large secretariats. BRICS can do the same.”