BRICS Development Bank parameters to be finalized by next summit

Polina Chernitsa
The Voice of Russia 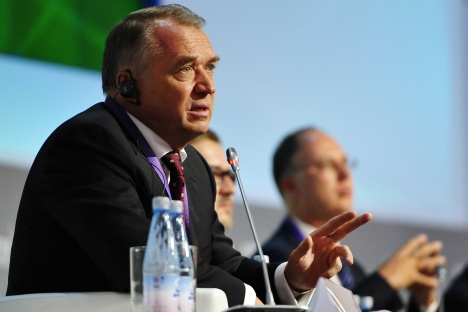 Sergei Katyrin: "Many speakers at the plenary sessions referred to the BRICS Development Bank as a settled issue. I think that this project will eventually take shape." Source: ITAR-TASS

With the BRICS leaders setting up the BRICS Business Council at their summit in South Africa, Chairman of Russia’s Chamber of Commerce and Industry Sergei Katyrin and Voice of Russia discuss a possibility of creating the BRICS development bank.

The leaders of the BRICS group of the world’s fastest-growing economies have set up the BRICS Business Council at their summit in Durban, South Africa.

Earlier, Durban hosted the first sessions of the BRICS business circles. In an interview with the VoR's correspondent Polina Chernitsa, Chairman of Russia’s Chamber of Commerce and Industry Sergei Katyrin talks about the issues that were on the table and the points that Russia made.

Sergei Katyrin: The business circles met during the previous BRICS summits, but never in the official format of the Business Council. I found the first day very interesting indeed. There were really interesting speeches by the economy ministers and heads of business delegations of all the member states.

I had an opportunity to speak on behalf of the Russian Federation. There were five debate sections each moderated by a representative of one of the five member states. I was the moderator of the Energy and Green Economy section.

We had a really interesting exchange of views on important matters sometimes well beyond the “green economy” topic.

For example, we discussed sustainable economic development in the context of energy security, but the discussion widened into the social aspects, living standards, and ways of ensuring all types of energy supplies from electricity to thermal resources, and so on. We spoke about the importance of exchanging power supplies, power saving and power transmission and conservation technologies.

We talked a lot on renewable and non-renewable sources of energy. The non-renewable ones are virtually exhausted, and such sources as oil and gas have their own calculable limits.

We, for our part, emphasized the need to think of the future, even though at present we don’t see any alternative sources that could supply a sufficient amount of energy to meet the needs of humanity. There are none, no matter what they say about research in promising new fields. We are supporting this research and our scientists are working on it. But there is a long way to go from the level at which we are today.

We spoke about energy safety. It’s impossible not to talk about it after Fukushima. And we also discussed nuclear energy, hydro-electric power generation, and the importance of water conservation, particularly in Africa. So it was a very broad discussion indeed.

The Voice of Russia: The main intrigue of the first day of the summit was that the BRICS Development Bank would not be created, at least not at this summit. What was the Business Council’s reaction to that?

S.K.: Many speakers at the plenary sessions referred to the BRICS Development Bank as a settled issue. I think that this project will eventually take shape. No ultimate decisions have been made as yet on the bank’s quantitative parameters, its authorized capital, its contributors and the volume of contributions. And the leaders will hardly agree to announce that any of the parameters have been finalized. Rather, they will leave the matter until the next summit.

The Voice of Russia: What are the tasks Russia is setting itself with regard to participation in the BRICS Business Council? Should the council deal directly with investments, investment projects, and relations between business and the state? How big is its potential?

I was asked to coordinate all that, to try to assemble it into a single whole. I think that all of us, as we were giving our consent to work in the council, were aware of our responsibility to the Russian business community and the Russian economy.