Russia and China team up in telecommunications 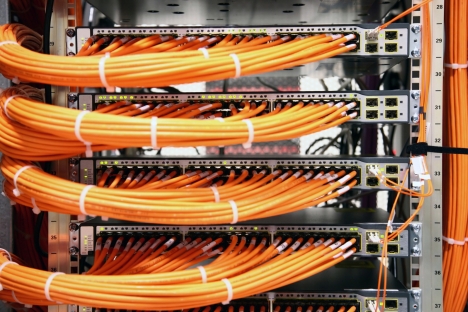 Russia and China came forward with an initiative to hand over control over the Internet to the International Telecommunication Union. Source: PhotoXPress

A joint telecommunication project between Russia and China may reduce their dependency on the United States in the Internet realm.

Russia and China may take over part of the telecommunications traffic between Europe and Asia. Experts say this would allow Moscow and Beijing to reduce their dependency on the United States — including in the Internet realm.

Late February saw the start of the construction of a new Russian-Chinese, cross-border, fiber-optic line, in addition to the two existing ones. The line will link Blagoveshchensk in Russia with Heihe in China. Albeit, the capacity of the new cable will be exhausted in two to three years, after which additional infrastructure will be required, Investcafe analyst Ilya Rachenkov believes.

A memorandum for building the line was signed back in October 2009, at the fourth Russian-Chinese business summit in Beijing.

The project envisages the creation of a second high-speed landline, the first of which was built in 2004 by Russian and Mongolian companies. The third cable will link the networks of the Russian telecommunications giant Rostelecom with those of China Telecom, increasing capacity on that line and significantly boosting reliability of data transmission.

Transit traffic between Europe and Asia is a very attractive piece of the telecom market pie at the moment. The two continents exchange approximately seven terabytes of information per second. However, most of that traffic goes along fiber-optic cables on the bottom of the Pacific Ocean, via the United States.

"There is never too much capacity — all the more so since, according to experts' estimates, the amount of traffic on that route may double by 2015," a senior analyst with FIBO Group, Anatoly Voronin, said.

He went on to recall that, in early February, Rostelecom announced the development of a back-up infrastructure to support traffic along its Transit Europe-Asia system. Russian operators are already experiencing a shortage of capacity and have concerns regarding reliability. According to Voronin, signal-delay time on the existing lines reached 150 milliseconds, with the requirement being around 50 milliseconds.

"The new line will meet this requirement, which is what Chinese telecom operators expect too," said Voronin.

In his estimate, the Rostelecom line has a potential capacity of some three terabytes per second — but this potential cannot be realized any sooner than the start of 2014.

Other Russian companies are not wasting time either.

They are also implementing joint projects with China. In June 2013, MTS plans to connect its trunk network to China Unicom's infrastructure. The Russian mobile operator will lay a fiber-optic cable to a crossing point on the Russian-Chinese border in Blagoveshchensk. The project will enable MTS to set up direct traffic exchange with China and, in the future, reach the traffic exchange site in Hong Kong and start operating on the Euro-Asian transit traffic market.

The Russian company's investment in setting up the border crossing is estimated at 70 million rubles ($2.2 million), while the network capacity is expected to reach up to 100 gigabytes per second and may be expanded further. Currently, MTS has nearly 87,000 miles of fiber-optic cables on Russian territory with a capacity of up to 4,000 gigabytes per second.

Another Russian operator, Megafon, earlier announced its intention to launch a project called DREAM (Diverse Route for European and Asian Markets) in mid-2013. It envisages two fiber-optic lines running from Frankfurt in Germany to China via Kazakhstan and capable of carrying all types of traffic.

The Euro-Asian traffic market has been booming, growing by more than 50 percent annually. However, a considerable part of that market is taken up by submarine cables, which have a number of technical drawbacks, the main one of which is that they are very difficult to repair. When a cable is ruptured, the line may be out of service for weeks.

According to preliminary estimates for year 2012, the whole of the Russian international traffic transit market is estimated at 5 billion rubles ($161.9 million). Analysts agree that the leader on that market is Rostelecom (with a 60-percent share), followed by Vimpelcom (30 percent).

The development of telecom lines between Russia and China would allow Moscow and Beijing to strengthen their positions in another key area of the international telecommunications system — the issue of how to make the Internet free from control by any one country.

At the moment, a large number of the main DNS servers that ensure the operation of the world-wide web are located in the United States. Moreover, the Internet is officially regulated by the non-governmental and non-commercial organization Internet Corporation for Assigned Names (ICAN) founded by the U.S.

National Telecommunications and Information Administration (NTIA). Some countries consider this to be unacceptable and propose stripping the U.S. administration of control over the Internet.

Earlier, Russia and China came forward with an initiative to hand over control over the Internet to the International Telecommunication Union, which is an international organization under the UN However, Europe and the United States opposed the move.

"The development of trunk networks is a very important part of the telecommunications business, given the explosive growth in traffic volumes," Rachenkov told RBTH.

In his opinion, it is due to geographical position alone that Russia will take over part of the traffic originating from Asia. According to the analyst, all of the aforementioned projects — those of Rostelecom, MTS and Megafon — have every chance of being implemented, which would prompt an increase in the share of traffic coming through Russian operators' networks.