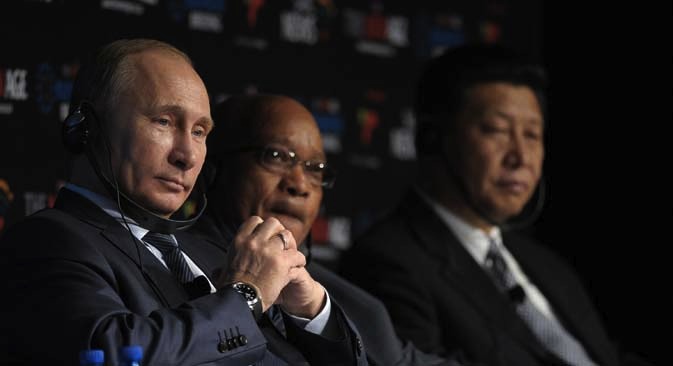 The fifth BRICS summit, which ended in Durban, South Africa, on March 27, resulted in several significant agreements, including the creation of a BRICS Business Council. However, there was no consensus on the details of a BRICS bank, which was expected to be the much-anticipated outcome of this year’s summit.

The fifth BRICS summit had the most ambitious agenda in the history of top-level meetings of the leaders of the five, major, non-Western economies: Brazil, Russia, India, China and South Africa, which was the last one to join the bloc.

The five heads of state had planned to address a multitude of issues — from the traditional discussion on restructuring the global economy, to undertaking real actions on the project to establish the BRICS bank. Yet not all of the issues on the agenda resulted in agreements.

Following a series of meetings, the five heads of state adopted the eThekwini Declaration and Action Plan, named after the Durban district that hosted the summit.

“The declaration contains the perception of the current political and economic situation in the world and captures the common approaches of the BRICS economies to the most relevant issues of multilateral cooperation,” said Russian presidential aide Yuri Ushakov.

He added that the Action Plan specifies the activities for the upcoming year and covered promising new engagement areas.

Russian President Vladimir Putin said that the business communities of the BRICS countries were capable of creating the conditions for ensuring stability, security and prosperity in the world.

“BRICS consists of five countries, and five is a special number for Africa. The big five animals in Africa, being the most respected species among hunters, are the elephant, the rhinoceros, the buffalo, the lion and the leopard,” the Russian head of state said, referring to the power and influence of the member-states.

This statement perfectly coincides with the habitual rhetoric on BRICS: The group of leading non-Western economies, from the very start, set themselves the task of rearranging the world and stripping the West of its economic dominance.

Commenting on the Durban summit, Kirill Likhachev, who is a member of the National Committee for BRICS Studies, said that the results of the two-day summit were predictable.

According to the expert, two major initiatives were pushed.

The first was Vladimir Putin’s proposal to formulate the international BRICS strategy and the concept for long-term economic cooperation. Progress was also reached in the area of common infrastructure projects, as concerned state agencies of the member economies are eager to sign and implement joint projects.

Also worthy of note are the efforts being made to engage South Africa within the BRICS framework as fully as possible.

Another important achievement by the five countries has been establishment of the BRICS Business Council — an institution that will bring together the leading business structures of the five members.

“Russia will be represented by the Chamber of Commerce and Industry and Vnesheconombank,” Likhachev said. “The involvement of private organizations should give a powerful impetus to significant investments in joint projects.”

The absence of consensus on a BRICS bank, which was initiated during the previous summit in India, is a temporary complication, according to Likhachev.

Despite the statement by South African President Jacob Zuma that “we instructed finance ministers to look into this matter and are ready to launch the bank,” the BRICS bank project seems as far as ever from being launched.

The member-states cannot agree on the location of the bank (each state would like to host it), the membership fees and the projects to be financed by the joint bank (either exclusively BRICS projects or third-party projects as well).

Leonid Gusev, expert at Moscow State Institute of International Relations (MGIMO), doubts that a BRICS bank can be effective at this stage.

“BRICS consists of the economic heavyweights, such as China and India, but the Chinese economy is so closely integrated with that of America that they almost have a common market. The same holds for India, so it is highly unlikely that these ties will be broken," said Gusev.

"Everything will depend on the developments in the U.S. and the eurozone,” he added.

Fyodor Lukyanov, editor-in-chief of the journal Russia in Global Affairs, mentioned the club phenomenon when commenting on the current status of BRICS and the fifth summit.

“It is a community where there should be no specific goals," he said. "Its existence and frequent meetings are the essence of the bloc. The very existence of BRICS and its format suit the objectives and approaches of Russia’s foreign policy — not against but bypassing the West.”