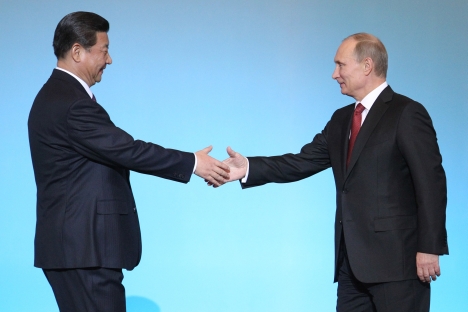 The critical importance of bilateral relations between China and Russia is evidently understood by both sides. Source: Konstantin Zavrazhin

The visit from the new Chinese leader showed Moscow and Beijing to be close partners, if not allies.

Chinese President Xi Jinping’s visit to Moscow ended in over 30 economic agreements being signed, although the nature of the bilateral relationship is political, as well. China seeks a partner in the Asia-Pacific, where rhetoric on the “Chinese threat” is rising, and Russia wants political cooperation, which is lacking in its relations with the U.S.

Despite the long list of trade agreements, the visit by Chinese President Xi Jinping to Russia bore a more political nature. After his inauguration, President Vladimir Putin made visiting Beijing his top priority last summer. In turn, having been sworn in as Chairman of the People's Republic of China, Xi Jinping flew straight to Moscow.

The critical importance of bilateral relations is evidently understood by both sides. Further proof is in the following passage from the joint statement issued after the talks on March 22-24 in Moscow: "Both countries will decisively support each other on issues relating to their core interests, including matters of sovereignty, territorial integrity, and security."

Developing this proclamation, the Chinese leader said in a speech to students at the Moscow State Institute of International Relations (MGIMO) that, "China and Russia should strengthen strategic cooperation in the international arena."

China is clearly rattled that Washington's doctrinal statements on increasing its military presence in the Asia-Pacific region are being implemented after just one year. The "return" of the U.S. to the Pacific has coincided with a sharp escalation in the territorial disputes between China and Japan, Vietnam, Brunei and the Philippines.

There has also been a distinct rise in rhetoric surrounding the “Chinese threat,” which is conceived of as not only military, but also economic and environmental (including the issue of natural resources). If not an ally, China needs a like-minded partner at the very least, and Russia is the objective choice.

Russia, too, has a military-strategic motive for strengthening ties with China. At the top of the agenda is missile defense. The meeting between Xi Jinping and Russian Defense Minister Sergei Shoigu "noted the mutual concerns of both sides on missile defense" and "recognized the need to continue the dialogue on this issue," stated Deputy Defense Minister Anatoly Antonov.

Moscow seems to propose maintaining a balance between political interaction in world affairs and economic ties in bilateral relations. Opening the talks in the Kremlin, Putin stressed that, to sustain the dynamics of the strategic partnership, "the focus needs to be on the most critical issues [...] one of which is the development of economic relations, which is of vital interest for our citizens."

China is already Russia's largest trading partner. In 2012, its slice of Russia's foreign trade amounted to 10.5 percent, while Chinese direct investments in the Russian economy grew by more than 1.5 times to $4.4 billion, with more than $1 billion in the opposite direction. Both countries aspire to cross the $100-billion threshold in bilateral trade by 2015 and the $150-billion line by 2020.

A major part in achieving these milestones will be played by the more than 30 economic agreements signed during the Chinese leader's visit to Moscow. The first was a memorandum on promoting investments in infrastructure projects in the Far East. However, among the most important agreements made was one on the increase of supplies of Russian hydrocarbons to China and the expansion of construction of the new southbound pipeline spurs.

In addition, a long-awaited memorandum on gas supplies to China was signed on the sidelines of Jinping’s visit. This marked the end of 10 years of tortuous negotiations, which had dragged on as parties failed to agree on a price formula.

"The document lays the foundation for a 30-year contract on the supply of gas from Russia to China," said Gazprom head Alexei Miller.

"It represents China's first procurement of important weapons systems from Russia in a decade," said the bulletin.

Russia and China team up in telecommunications

Military-technical cooperation, trade in hydrocarbons, and investment in Siberia are also essentially political projects — and not only because of their magnitude. A "safety net" is being created (or, rather, the existing one is being reinforced) for the purpose of political cooperation, which is lacking, for example, in U.S.-Russian relations.

For Russia, however, establishing a formal alliance with the PRC is not a priority — and not because Moscow fears the reaction from abroad.

As demonstrated by last month's approval of its new Foreign Policy Concept, Moscow is certain that international processes depend on there being a multipolar world. According to the Concept, bilateral alliances and 20th-century "axis" politics have no place in the new order. Instead, collective leadership from the major nations is needed. Pride of place will go to informal structures with no charter or standing bodies, such as the G20, the G8, and the BRICS.

It is rather symbolic that, having wrapped up the talks in Moscow, the leaders of Russia and China immediately departed for South Africa to attend the upcoming BRICS summit — in different planes.