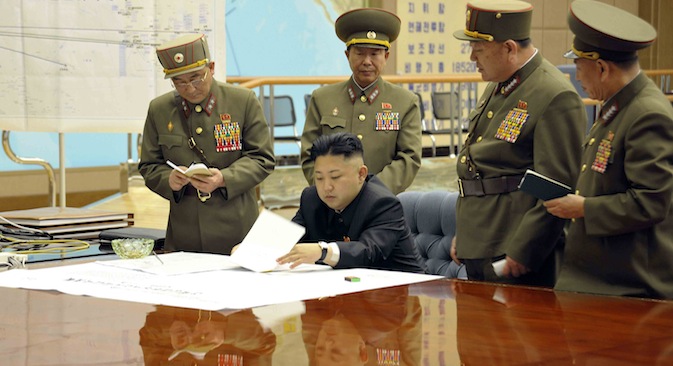 Pyongyang has announced that it is in a state of war with South Korea. Experts believe the statement is a response to the joint U.S.-South Korean military exercises near the North Korean borders. Russia, which shares a 10-mile land border with North Korea, is anxiously watching the situation.

The situation on the Korean Peninsula deteriorated on the evening of March 30. Western news agencies report that North Korea has announced that it is in a state of war with South Korea and is ready to react to the provocations on the part of Washington and Seoul – not stopping short of nuclear retaliation.

Experts stress that the threats are political and real combat is not in the cards.

“I see this statement not as a direct declaration of war or the start of hostilities. Rather, Pyongyang, for its part, considers the state of truce to be over," says Alexander Vorontsov, head of the Korea and Mongolia Department at the Russian Academy of Sciences Oriental Studies Institute.

"This is not a declaration of intent to start combat actions, but a show of determination to retaliate in the event of possible provocations,” he clarifies.

Still, Vorontsov stresses the unprecedented pitch of the rhetoric. The last time similar tensions or confrontation occurred was in the 1960s, when North Korea seized an American ship in its territorial waters. In that case, a diplomatic solution was reached – but it took a year, the RAS representative notes.

The worst-case scenario is the start of a real war with unpredictable consequences.

“There is no guarantee that a local conflict could be prevented from spreading,” Vorontsov says, pointing out that this would pose a threat to Russia’s 10-mile land border with North Korea.

The negative scenario would also threaten Russia’s Primorye (maritime province in the Russian Far East). There is a risk of ecological disaster, since the 30 nuclear reactors in the north and south of North Korea “could turn into 10 Chernobyls and Fukushimas,” Vorontsov says.

The flow of refugees would also inundate China and possibly reach Russia.

“I hope that common sense will prevail and that the DPRK is not harboring first nuclear strike plans – although it reserves the right to a pre-emptive strike. Seoul and Washington are showing a responsible attitude to the situation and, hopefully, will not cross the line,” Vorontsov told RBTH.

Under the circumstances, the best option for Russia – which has more than once acted as a broker in the Korean conflict – is the language of diplomacy. Excessive military build-up near the borders with North Korea will not be conducive to diplomatic dialogue.

“But we should think about securing our own border. So Russia should strike a balance and proceed carefully and judiciously,” says Vorontsov.

The head of the Current Political Studies Center, Alexei Chesnakov, says the next few days will show whether the conflict will sharpen and threaten disaster, or whether North Korea will find a roundabout way.

“In any case just putting the problem on the back burner is no longer an option, and the responsibility for solving the Korean issue rests not only with these two countries, but with all the members of the six-party settlement process,” says Chesnakov.

Russia should waste no time in joining the process of lessening tensions, he believes.

Alexei Pushkov, the chairman of the State Duma Foreign Relations Committee, links North Korea’s actions to the recent military exercises South Korea and the U.S. held close to North Korea’s borders. He thinks Pyongyang’s statements are primarily meant to send a signal to the United States.

“They have drawn a lesson from the Iraq war, when Saddam Hussein was unprepared and unable to deliver a strike on the enemy territory. North Korea, by threatening the U.S., its bases and allies, is warning America that it will not be treated like Iraq: Don’t touch us, or else we will act as we see fit. And they have the potential to retaliate,” says Pushkov.

Though the international community sees all this as a fit of hysteria, the North Koreans have achieved their aim and made the U.S. take their statement seriously, Pushkov notes. Now America will consider Pyongyang’s position when deciding what to do next.

“Russia is following the situation and is extremely worried about it. It is one thing to give a signal and use political pressure, but using military force to solve the issue is inadmissible and unacceptable,” the head of the Duma Foreign Relations Committee told RBTH.