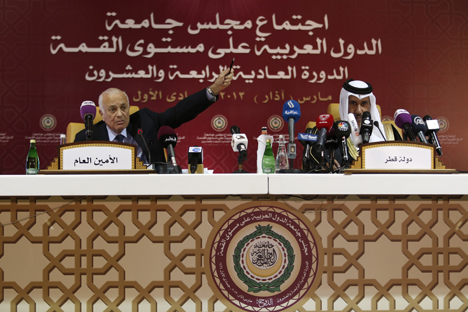 The Arab League Summit resulted in the decision to hand over Syria’s place to the National Coalition for Syrian Revolutionary and Opposition Forces. Source: Reuters

Russia called the decision taken at the Arab League Summit in Doha “completely unhelpful” in terms of peaceful settlement of the conflict in the Syrian Arab Republic. The decision may signify a step toward attempting to military intervention in Syria.

Russia believes the decision taken at the Arab League Summit in Doha is unhelpful in terms of finding a peaceful, political settlement of the conflict in Syria. In fact, the decision may signify a step toward attempting to push through a U.N. resolution authorizing military intervention in Syria.

On March 26, at the Arab League Summit held in the Qatar capital of Doha, the decision was made to offer the National Coalition for Syrian Revolutionary and Opposition Forces (NCSROF) Syria’s place in the Arab League until elections are held to form a new government.

“The National Coalition shall be the sole legitimate representative of the Syrian people, the main Arab League partner, considering the sacrifice of the Syrian people and the exceptional conditions in which the Syrians find themselves,” states the document, which was read aloud live on Arab TV channels on Tuesday, March 26.

Expert forecasts deterioration in the Middle East for 2013

A meeting of Arab League foreign ministers that took place two days earlier ended with the decision (backed by Qatar, Saudi Arabia and other Gulf countries, and the “Arab spring” countries) to hand over Syria’s place to the NCSROF. Algeria and Iraq voted against the motion, arguing that such a decision contradicts the Arab League Charter; Syria’s neighbor Lebanon abstained.

Article 8 of the Arab League Charter details the need to respect the state system of all the Arab League countries and the inadmissibility of any actions aimed at regime change in the Arab states. The Charter also mandates that decisions on such issues should be taken unanimously. Otherwise, a decision is binding only for those who have backed it.

The Arab countries in Doha recognize the importance of efforts to settle the conflict in Syria by political means. Yet each state has been left to decide for itself whether it should supply arms to the groups fighting the Bashar Assad regime.

The summit’s final document says that, “each member state of the Arab League has the right to supply defensive means as it so wishes – including military defense – to support the resistance of the Syrian people and the Free Syrian Army (the armed wing of the Syrian opposition).”

In the opinion of Arab League Secretary General Nabil Elaraby, arming the opposition would “balance” the forces of the adversaries in Syria and eventually accelerate the achievement of a political solution.

Russia has criticized the Arab League’s position. “The Arab League has renounced peaceful settlement, and a decision that makes the National Coalition for Syrian Opposition Forces the sole legitimate representative of the Syrian people definitely erases all the efforts exerted up until now, including the accords reached in Geneva on June 30, 2012,” Russian Foreign Minister Sergei Lavrov said.

The decision to give Syria’s place to the NCSROF is “completely unhelpful” in terms of peaceful settlement of the conflict in the Syrian Arab Republic, believes Vitaly Churkin, Russia’s Ambassador to the U.N.

“It means that the Arab League has totally withdrawn from the process of the search for political settlement of the crisis,” Churkin told ITAR-TASS. He recalled that the Arab League “from the outset had found itself under the influence of certain extremist forces and certain states which have their own agenda.”

According to Churkin, offering NCSROF a place in the Arab League that rightly belongs to Damascus raises certain legal questions. “Syria has not been expelled from the League, its membership has been suspended,” said Churkin.

“In general, suspending Syria’s membership in the Arab League from the beginning of the crisis showed that the League was not committed to serious negotiated decisions.”

Meanwhile, the armed opposition admits that the next step it would like to see is external military intervention approved by the U.N. “The summit must prepare an appeal to the U.N. Security Council demanding that Chapter 7 of that organization’s charter be invoked,” Mahmud al-Hamza, a member of the opposition Syrian National Council, told Izvestia.

Moderate Syrian opposition has condemned the decisions taken at the Arab League Summit.

“The decision of the Arab League to give Syria’s place to the National Coalition for Syrian Revolutionary Opposition Forces is illegal in terms of the structure of the Arab League, because the Arab League is an association of states and not organizations,” said Majed Habbo, secretary of the overseas branch of the opposition Coordinating Committee for Democratic Change.

“The preference and support of an organization representing only one wing of the opposition deals a blow at the efforts of the U.N. and Arab League special envoy to Syria, Lakhdar Brahimi, and the efforts of the entire world community by way of the Geneva agreement to reach a peaceful settlement in Syria.

The results of the Arab League Summit suggest that a serious step has been made toward dismembering Syria,” Habbo said.

Rim Turkmani, an opposition leader in the Building the Syrian State Movement, had this comment on the Arab League’s position: “The decision of the Arab League to recognize and support the opposition will merely aggravate the situation in the country, stiffening the regime’s resistance and deepening the divisions in society.

Although words were heard at the summit on political means of settling the conflict, practical decisions attest to the opposite: the place at the Arab League has been given to an opposition organization whose Charter says unequivocally that there can be no negotiations and no dialogue with the regime.”