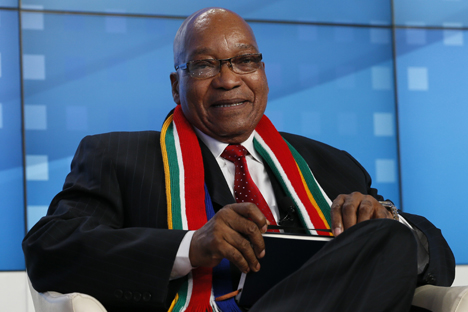 Experts forecast Africa could be the next driver of global growth.

Experts believe Africa could be the next engine of global economic growth:  labor, resources and consumer demand on the African continent are becoming more and more attractive, while the investment appeal of the European continent shrinks. BRICS, which already makes up 25 percent of all Foreign direct investment (FDI) in Africa, is looking to fuel the continent’s growth.

Thanks to the BRICS, today's unipolar world could again become multipolar. The first to feel the effects will be the governments of the African continent, where, for the first time ever, the young bloc can issue an informal challenge to the monopoly of the United States and the European Union.

Asia is widely viewed as the engine of economic growth, but despite the seemingly bottomless markets of China and India, the booming rates will not last forever. Another 10 or maybe 20 years and demand will start to become saturated, leaving investors looking for new sources of inspiration.

The next driver of global growth could well be Africa, which is seeing a convergence of many of the factors that led to Asia's success: cheap labor, healthy resources and potentially huge demand for consumer goods.

"Africa has great development prospects. The extractive industries and cheap labor could certainly lay the foundation for new sources of economic growth.

As Europe's investment appeal declines and the continent sinks into a long recession, the 'twilight of Europe' will cause even the most cautious investors to seek new pastures," Ivan Fedotov, vice chancellor of the Russian Presidential Academy of National Economy and Public Administration, told RBTH.

Africa is biding its time, readying itself for a sharp burst forward. Since the early 1990s, its total GDP has grown by just 40 percent, although trade and private investment have expanded far more rapidly, quadrupling and doubling, respectively.

This could have a cumulative effect down the line, in the not too distant future, while investments from the BRICS countries will provide excellent fuel for this growth.

Presently, the BRICS countries lack sufficient influence in global financial politics and do not occupy key positions in the world's financial institutions. However, their accumulated experience in Africa is not inconsiderable.

Russia, for example, as the legal successor of the Soviet Union, retained its links with African countries, and a number of Russian companies are doing a good line of business on the continent. In early 2009, Russia wrote off more than $20 billion of African debt and appointed a special presidential envoy for regional relations.

The post is currently held by the chairman of the Foreign Affairs Committee of the Federation Council, Mikhail Margelov.

"There are strong institutions operating in Africa. The African Union has overcome the post-Qaddafi crisis and is now a robust international organization. Africa is a continent with money and the desire to start working; it is attracting international business, including Russian. As a whole, the continent's economic growth is higher than that of some Asian countries," said Margelov in a recent interview with radio "Echo of Moscow".

Many Russian companies are already in the Congo, for example, and the economy is showing steady growth of six percent per year. Last year, the president of the Republic of Congo invited Russian business to partake in the construction of transport highways, oil pipelines, and energy infrastructure.

Russian firms are also highly active in Mozambique and Zimbabwe. For example, plans are being drawn up to lay an oil pipeline from Mozambique to Zimbabwe and neighboring Zambia and Malawi.

Admittedly, Russia's trade with African countries south of the Sahara is negligible compared with that of the EU and China – Moscow lags behind Brussels and Beijing by a factor of roughly 20.

However, as stated by Margelov, the "period of Chinese domination in the African economy is already over. African leaders are well aware that a system of checks and balances is called for, and, in this sense, Russia is an ideal partner.”

To promote its interests in Africa, Russia is utilizing its Soviet experience with some new tools, one of which, in the words of Margelov, is to aid the continent under the umbrella of the G-8. "Today, there is no country on the African continent that would not be ready to cooperate with Russia, both politically and economically," Margelov told journalists before the BRICS summit in Durban.

Africa is primarily of interest to long-term investors, asserts Fedotov. "And that happens to be the state policy of China. Under the guidance of the Communist Party, it has become more capitalist than the U.S. I'm sure it won't be long before China is brushing elbows with U.S. and European financiers.

Russia is renowned for its solid, long-term relations with most African governments, and its ability and willingness to write off debt, create joint ventures, and provide expertise.

In addition to arranging its own affairs in Africa, Russia can help China and other BRICS countries advance their projects on the continent. Accordingly, the strengthening ties between the governments of Russia and China will consolidate the positions of all the BRICS countries in Africa," said Fedotov.

The latest BRICS summit, which opened on March 26 in Durban, South Africa, is expected to produce a number of key decisions in the bloc's further development, and the African theme is not the last item on the agenda. For instance, Margelov is sure that the talk could be about ending the era of domination in Africa by the U.S. and the EU.

"New players have arrived on the African scene – namely the BRICS countries," he said on the eve of the summit.

He stressed that no member of the group was tainted by a colonialist past in Africa, and that all BRICS members espoused a policy of non-interference in the internal affairs of African countries.

"No BRICS member seeks to spread democracy in Africa by force or impose its values through expeditionary troops and bombs," said the special presidential envoy.

The bloc is growing economically and able to back up its words. In the last 10 years, the inflow of foreign direct investment in the BRICS countries has more than tripled to nearly $263 billion as of 2012, according to a special addendum to the World Investment Report prepared by the U.N. Conference on Trade and Development.

In the space of 12 years, BRICS has increased its share of global foreign direct investment from six to 20 percent, while FDI flows from BRICS to Africa now make up 25 percent of all foreign investment in the continent.