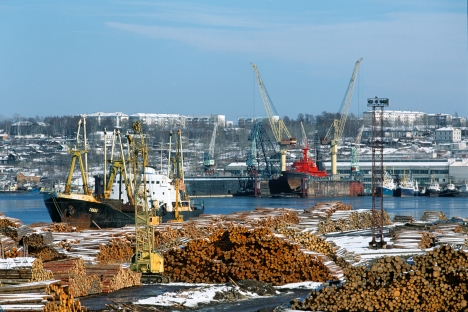 The world may view Russia’s Northern Sea Route, that links Europe to the Pacific, as a viable alternative to traditional sea freight lines because of economic considerations and matters of security.

Economic considerations, as well as matters of security, are increasingly causing the international community to eye Russia’s Northern Sea Route as a viable alternative to traditional sea freight lines. The route links Europe to the Pacific, providing faster, cheaper transit in that direction than shipping lanes through the Suez or Panama canals.

The Northern Sea Route is Russia’s historic, national transport system along the Arctic seas. It is the shortest maritime route between Europe and the Asia-Pacific, allowing for significantly faster transit times than the traditional freight lines across the southern seas. It is also much safer, piracy being completely impossible in its waters.

Advantages of the Northern Sea Route

The Northern Sea Route passes through the Arctic Ocean’s Barents, Kara, Laptev, East Siberian and Chukchi seas, as well as through parts of the Pacific Ocean’s Bering Sea.

The route serves Russia’s Arctic seaports and major Siberian river ports. It is used for transporting fuel, equipment and foodstuffs to the country's northern areas and for bringing back timber and minerals.

The distance between St. Petersburg and Vladivostok, if traveling along the Northern Sea Route, is over 7,500 nautical miles; the same route via Suez will be over 12,000 nautical miles long.

The future of the Northern Sea Route

“It presents an excellent opportunity for cutting transportation costs,” said Putin. “Those governments and private companies that choose the Arctic transit route will receive economic advantages and dividends.”

Indeed, a shorter route means lower shipping costs, which are in direct proportion to the time the freight spends in transit.

Analyst Alexander Uvarov with the Atominfo news agency notes that the entire length of the Northern Sea Route is covered by a network of monitoring stations, which provide freight tracking at any point in transit.

“Once a network of emergency centers has been set up to ensure the safety of passing vessels, the Northern Sea Route will become even more popular with freight forwarders,” says Uvarov.

The popularity of the Northern Sea Route continues to grow: 46 vessels used its waterways last year, compared to 34 in 2011 and just four in 2010.

According to the Russian Federal Agency for Maritime and River Transport, about four million tons of freight was transported along the Northern Sea Route in 2012. This figure included 1.2 million tons of transit freight, which is 53 percent up on the 820,800 tons transported in 2011. The share of transit freight is set to grow by another five or six percent this year.

Ice remains the key impediment to the passage of vessels in the Arctic. Russia is beefing up its icebreaker fleet to support active shipping operations along the Northern Sea Route.