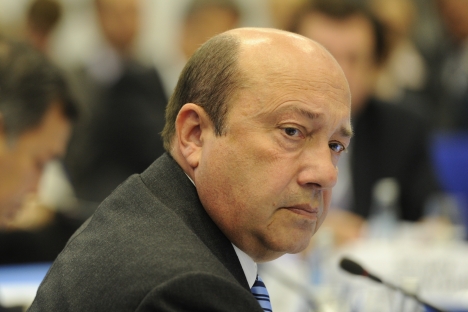 Where does the mistrust in the EU-Russia relationship come from? What needs to be done to root out the lack of trust? The President of the Russian International Affairs Council Igor Ivanov and RIA Novosti address these questions.

Former Foreign Minister and President of the Russian International Affairs Council, Igor Ivanov, told RIA Novosti where the mistrust in the EU-Russia relationship comes from and what needs to be done to improve the relations.

RIA Novosti: Considering the obvious differences between Russia and the EU, are we not returning to the times of the Cold War?

Igor Ivanov: [In March] we organized the conference as a way of celebrating the 10th anniversary of the May 2003 Russia-EU Summit. Why do we consider this to be a reference point? I attended that summit. President Vladimir Putin and the leaders of all the EU member states were present, as were the leaders of 10 EU candidate countries.

I remember the immense enthusiasm that prevailed 10 years ago. The meetings felt like we celebrating something – celebrating unity. A lot of people felt that we had left the Cold War behind and were opening a new chapter of Greater Europe.

Unfortunately, as it sometimes happens in politics for various reasons – and let us not blame anyone – that process, instead of gathering momentum, began to fade.

I.I.: We are in a situation where trade and economic relations are developing. Business – both European business in Russia and Russian business in Europe – is increasingly looking for opportunities to work together.

Europe is our main trading partner. Trade with Europe is so important to us that no one could replace it in the near future – not China, not Asia – because what we get from Europe we cannot get from Asia. And what we supply to Europe we are not going to supply to Asian countries in such quantities.

What happened was that economies developed and economic ties were moving forward. We joined the World Trade Organization, but politics stayed behind.

Today there is an obvious gap between economic ties, long-term interests and the political form that should ensure further development. That is why many speakers at the conference spoke about the lack of confidence between us.

RIA Novosti: What needs to be done to restore confidence?

I.I.: During the Cold War, mistrust came about because of ideological incompatibility, which is not the case today. Today, mistrust stems from unpredictability, with neither side not knowing what the other will do.

Why are the events in Cyprus so indicative? Because Europe knew very well that Russia had interests in Cyprus. If any decisions are taken – especially such drastic ones as are being taken with regard to the Cyprus banking system – the European Union knows full well that Russian interests will be affected. They should have to if not consult with then at least notify [Moscow].

When there is unpredictability, and surprises like this occur, the first reaction is to think that it was directed against us, that they are trying to mess with us – not to save the European banking system, not to solve any internal European problems, but just to spite Russia. If that is the case, we will reciprocate. It is this tit-for-tat squabbling that has brought us to the situation we are now in, when, instead, we should be looking for constructive solutions.

During the conference, the speakers said that there was a need for a permanent negotiating mechanism, so that we could move toward strengthening legal foundations. Furthermore, mechanisms are needed to prevent crisis situations, to fend off various abuses and misunderstandings. In other words, it is necessary to create forms of cooperation that will allow us to understand each other better. The best form for this is dialog.

RIA Novosti: What can such a dialog yield?

I.I.: I think there is a very urgent need for such a dialog. But, of course, dialog alone will not solve the problems. It will identify them before consistent negotiations can be started.

Speaking strategically, I see no serious insurmountable problems looming ahead between Russia and Europe that might lead to confrontation. We may differ over the Syrian situation, the Cyprus problem, etc. But there’s nothing out of the norm in that.

Today, the situation in the world is developing so rapidly and unpredictably that there are no one-size-fits-all solutions. We are looking for ways to solve these problems, and different points of view may be put forward during the course of this search. There are even differences within the European Union itself, and between allies, between the United Stated and the European Union.

The interview is first published in Russian in RIA Novosti.