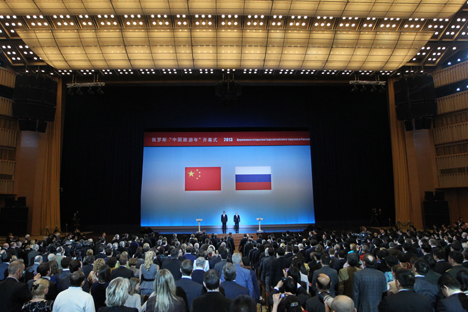 Documents recently signed between Moscow and Beijing concerned energy cooperation, joint development of the Far East, space exploration, high technologies, culture, health care and tourism. Not since the times of the post-WWII strategic partnership have the two countries shared so many interests.

Moscow and Beijing are taking their relationship to a whole new level. Not since the times of the post-WWII, strategic partnership have the two countries shared so many interests and so great a desire to strengthen cooperation and friendship.

Of special importance is the current level of mutual trust, which was stressed by Russian President Vladimir Putin, following talks with his Chinese counterpart Xi Jinping in Moscow on March 23.

Russia became Xi’s first foreign capital to visit as president, and Putin’s choice of venue for meeting his guest was most becoming: the Hall of the Order of St. George in the Grand Kremlin Palace, which once served as the gala hall of the Russian emperors’ former residence.

Eyewitness accounts confirm that the welcoming ceremony matched the location in grandeur. This is little wonder, given the dynamic development of the two countries’ ties. Last year, China yielded only to the EU in the volume of trade with Russia; Moscow, for its part, climbed from 10th to ninth position on the list of Beijing’s largest foreign trade partners.

Top management of Russian and Chinese energy companies received the most limelight during the welcoming ceremony. Energy is the current focus of the two countries’ strategic interests.

Russia is aiming to diversify its hydrocarbon exports and shed dependency on Western Europe — its single largest customer that has recently grown overly capricious.

China, quite fittingly, is diversifying its energy imports: until recently, the country was mainly buying hydrocarbons from the Persian Gulf and, primarily, from Iran and Oman.

Of the 35 documents signed during Xi’s visit, the intergovernmental agreements on expanding energy cooperation were especially significant.

The sides agreed to double Russian crude exports to China to 31 million tons annually, build an oil refinery in Tianjin with an annual capacity of 13 million tons, enhance cooperation in oil exploration and production, and conduct a feasibility study of the project to annually supply China with significant amounts of electricity.

Major headway was made in the gas talks — perhaps the most problematic aspect of the two countries’ energy cooperation. Russian gas giant Gazprom and the Chinese energy company СNPC signed a memorandum to supply China with pipeline gas.

The price has yet to be finalized, but the two countries’ leaders instructed their respective companies to intensify talks on the issue.

According to media reports, independent Russian energy providers might get a share in gas exports to China. Novatek, for example, could supply liquefied natural gas from its Yamal-SPG project.

For this to come true, however, Gazprom will first have to give up its monopoly on fuel exports. Another potential problem is that gas transportation along the existing routes is currently quite expensive. A project to ship gas along navigable rivers, if implemented, could cut these costs.

“The economic outcome of the Putin-Xi meeting may be put at $20-25 billion,” says analyst Narek Avakyan of the Russian financial company AForex. “If more such meetings follow in the future, their combined worth might exceed $100 billion for either side”.

In other words, the two countries’ target of bringing annual bilateral trade up to $200-220 billion from the current $90 billion is shaping up to be fairly realistic.

The fact that mutual trade is ramping up is evident from the heightened bilateral interest in transactions involving the two countries’ national currencies. In April 2013, the Moscow Interbank Currency Exchange (MICEX) expects to introduce tomorrow settlements and swaps for ruble-yuan trading.

The interest on transactions in yuans will be considerably reduced, Igor Marich, managing director of the MICEX money market business division, told RBTH. Also in April, MICEX will add the option of settling onshore accounts in yuans via the Bank of China in Shanghai; at present, all transactions are done in Moscow via local subsidiaries of Chinese banks.

Marich says the volume of trade in yuans at MICEX currently stands at several million dollars every day, which is still incomparable in size to the volume of trade in euros, let alone in dollars. However, the number of traders is growing steadily: more than 70 banks take part in yuan trading at present, including such major Chinese market makers as the Bank of China and the Industrial and Commercial Bank of China. Coincidentally, these are the two settlement banks for the MICEX yuan transactions.

“So far the trade in yuans has been more of a customer service; but we hope that, following liberalization of trade in yuans, this currency will turn into an instrument of financial transactions,” says Marich. He estimates that, in the medium term, the volume of yuan trade at MICEX will catch up with that of the euro. This is a very ambitious target, considering that the EU countries currently account for slightly less than 50 percent of Russia’s overall foreign trade.