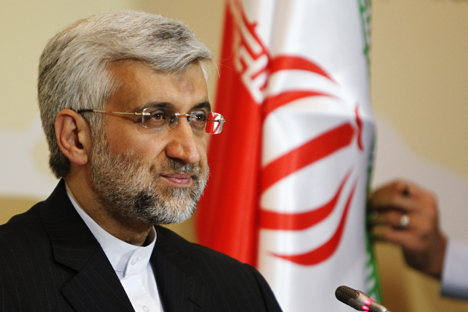 The new round of negotiations on the Iranian issue failed to bring any tangible results. Still there is obvious progress – the sides have finally arrived at the crux of the matter.

Experts believe that, after the presidential election in Iran this summer, all parties could be in position to limit Iran’s 20-percent uranium enrichment.

Russia’s deputy minister of foreign affairs, Sergei Ryabkov, told journalists in Almaty, Kazakhstan, where an Iranian delegation and a delegation of the five permanent members of the U.N. Security Council (plus Germany) discussed the Iranian nuclear problem on April 5-6, that: “The current negotiations between the P5+1 and Iran have taken a clear step forward”.

Ryabkov added figuratively: “We’ve got to the meat of the matter in terms of where everybody stands,” meaning that both sides have discussed specific mutual demands in a sincere manner, without emotions or excessive rhetoric.

“For the first time that I’ve seen, [there has been] a real back and forward between us, where we’re able to discuss details, to pose questions, and to get answers,” she said.

This outcome is apparently also acceptable to the United States, which, according to an administration official quoted by theLos Angeles Times, “wanted at the very least to engage the Iranians in real negotiations on the substance of our proposals”.

Yet there are few indications that the differences have narrowed. “We haven’t succeeded in reaching a mutual understanding. We’ll have to do our homework,” Ryabkov said, hinting that the delegations have something to discuss back home with their governments after the Almaty talks.

When asked whether Iran had refused to change its uranium enrichment activities, Ryabkov said: “It’s not appropriate to disclose details of the negotiations, but, in my view, this assessment is unfounded”.

Saeed Jalili, head of the Iranian delegation, was slightly more specific. “The Iranian people will continue to defend their rights,” he said, admitting that suspending enrichment activities “could become an element that would help create and promote trust”.

“If the other parties respected the right to enrichment and peaceful nuclear activities and recognize it, this, of course, would help us a lot to advance the discussion of issues,” said Jalili.

This is a clear hint at Iran’s readiness to discuss at least a suspension of uranium enrichment – a source of a major concern for the P5+1 group. Besides an acknowledgment of its nuclear program’s legitimacy, Tehran is demanding the lifting of sanctions imposed by the U.N. Security Council, as well as by the United States, the European Union and other countries.

This is a step forward, albeit a small one.

At the previous round in February, the P5+1 proposed an updated action plan for “swapping” Iran’s nuclear program in exchange for the lifting of sanctions. Experts from both sides worked with the plan in March.

Citing diplomatic sources, some media reported that Iran was contemplating a proposal by international mediators to suspend uranium enrichment to 20 percent in exchange for an easing of the sanctions.

Moreover, Tehran was allegedly considering transforming its 20-percent uranium stockpiles into uranium oxide, which can only be used for medical purposes.

It was reported, however, that Iran still objected to some of the intermediaries’ proposals, including a suspension of all operations at its Fordo nuclear site (except for the 20-percent uranium enrichment), an expansion of nuclear sites inspections by International Atomic Energy Agency (IAEA) experts, and the export of uranium enriched to 20 percent.

If Tehran agrees to the proposals of the P5+1, sanctions against its petrochemical industry and gold operations will be partially lifted. However, restrictions on oil exports and its banking sector will remain in place, according to diplomatic sources.

This formula reflects Russia’s approach: a gradual relaxation of sanctions in exchange for Iran’s reciprocal steps with regard to its nuclear program.

The question is how realistic the specific demands are. Vladimir Evseev, director of the Public Political Studies Center, believes that, if the goal is to make Iran fully abandon 20-percent uranium enrichment, then it is “totally out of reach.” According to him, “we can only talk about limiting their activity.”

Evseev believes that, if Iran agrees to limit the process of 20-percent uranium enrichment, it will not think about enriching uranium above 20 percent to a highly enriched state. Evseev noted that Iran had mentioned the reason why it needs nuclear energy: to produce fuel for nuclear submarines.

Much also depends on the outcome of Iran’s presidential elections. Candidate registration has already begun, and the incumbent, Mahmoud Ahmadinejad, is ineligible to run.

The poll is scheduled for June, and the country will have a new president by August – a new president who, by definition, will be devoid of his predecessor’s aura of irreconcilability. It is then that Iran’s views on the intermediaries’ proposals will probably take shape, together with the timing for new negotiations.