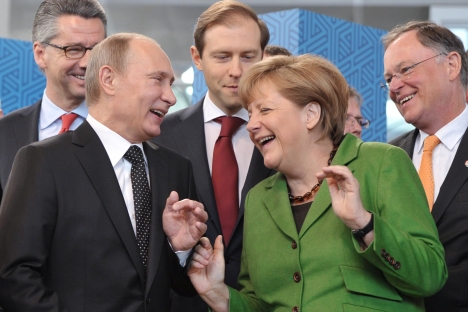 Recent political developments overshadow the economic success of Russia at the Hannover Messe.

The setting could not have been better for the Russian president’s visit to Germany. Not only is

Russia and Germany may reach $100 billion mark in trade soon

the Hannover Messe the most highly visited tradeshow in the West for Russian businesses, but it is also the most profitable.

As Russia is the official partner country of the Hannover Messe 2013, there have been more Russian businesses – 170 to be exact – than ever before. Russian businesses and their German partners have signed a number of multi-billion-euro deals in Hannover, all in the presence of German Chancellor Angela Merkel and Russian President Vladimir Putin.

Economically speaking, the Hannover Messe will most certainly be deemed a massive success for Russia.

For instance, German conglomerate Siemens signed a strategic cooperation agreement with state-owned Russian Railways (RZD). The agreement stipulates that Siemens and Sinara (a subsidiary of RZD) jointly produce a minimum of 350 electric trains by 2020. Sinara will control 51 percent of the joint venture, which has been named “Uralskie Lokomotivy,” while the other 49 percent will belong to Siemens.

Furthermore, the German conglomerate signed an agreement with Russian oil pipeline operator Transneft, which stipulates an increase in cooperation of pipeline management. Part of the deal includes Transneft buying more equipment from Siemens for the largest Siberian pipelines – VSTO-1 and VSTO-2.

The Canadian-German corporation Bombardier Transportation signed a joint production agreement for low-floor trams with the Russian company Uralvagonzavod (UVZ). Russia and the CIS countries are seen as huge markets due to the outdated Soviet locomotives and subway trains.

The Hannover Messe was also a great success for Russia itself. German construction companies will be partners in the construction of a new biotech cluster in Kaliningrad; the total investment is estimated at about €30 million ($39.1 million).

For Putin, however, the visit to the tradeshow has not been a success. This is the belief of German expert Jens Siegert, who is head of the Moscow office of the Heinrich-Böll Foundation.

Western media coverage of the state visit has focused on Chancellor Merkel’s criticism of Russia and the spectacular protest actions of Ukrainian and German human rights activists in Hannover, rather than the economic milestones achieved by the cooperation between Germany and Russia.

The reason for these strained relations are the raids on the offices of German nongovernmental organizations (NGOs) in Moscow and other Russian cities, which took place shortly before Putin’s visit to Germany. Officially, these routine inspections were organized to establish the legal requirements for registration. A number of Western experts view this as an attempt to intimidate independent NGOs.

“Putin basically forced Miss Merkel to adopt a more concrete position than she has had to in the past or that she wanted to. But mass inspections of NGOs, as well as politically affiliated German foundations, were very badly received by the German public, forcing the chancellor to act. Moreover, this situation could end up driving apart the Green Party and the Social Democratic Party, which is the last party not openly criticizing Putin. I emphasize this: Putin, not Russia,” says Siegert, explaining why Chancellor Merkel had no other option but to react.

In the end, Putin had to defend and justify his politics, instead of basking in the success of the partnership.

The criticism by Chancellor Merkel was fully understood in Moscow, says Russia expert Hans-Henning Schröder, Ph.D., of the German Institute for International and Security Affairs (SWP) in Berlin.

“I have the impression that both the chancellor’s statements and public opinion in Germany were heard. Looking at what Russian papers have written, it is clear that the proceedings against German NGOs have caused irritation in Russia itself,” says Schröder.

“Putin’s interview on the German TV channel ARD can be seen as an attempt at damage control. Regrettably, his staff failed to supply him with more valid arguments. His observations were sadly erroneous – for instance, when he compared Russian and U.S. regulations. That should have been known to Putin’s spokesman, since it was discussed widely in the summer,” the expert says.

Germany’s criticism, however, should not further strain relations between the two countries, Schröder went on to say.

According to the expert, “Russia is a neighbor and an important financial partner. Russia and Germany are connected by geographic location, culture and a common history. Both countries are reliant on each other and will cooperate closely. Both countries will move past the momentary stagnation in political relations, due to the German retreat into the EU on the one hand and Russia’s focus on post-Soviet regions on the other.

“The chancellor will keep up relations with Moscow and continue to improve them. For that, she needs a partner in Moscow who is interested in expanding that cooperation into all domains: political cooperation on international issues, collaboration in the post-Soviet regions, cultural and social exchange and the further development of commerce and investment,” says Schröder.