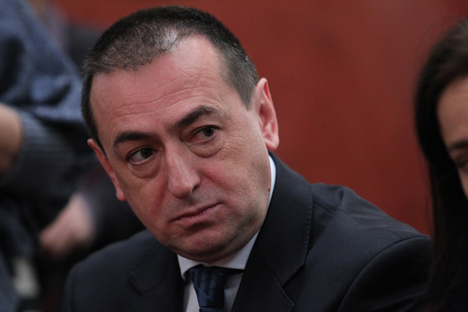 Andrei Avetisyan: "If the global community decides that Afghanistan has been dealt with – that it’s all over and we can now turn to other problems – then 9/11 will eventually become a reality again". Source: PhotoXPress

Ahead of the Russia-NATO Council meeting scheduled to take place in late April, Russia’s ambassador to Afghanistan talks about the efforts of the international community and the Afghan government to pull that country out of its 12-year war.

A meeting of the Russia-NATO Council at the foreign ministers level will take place in Brussels on April 23. Cooperation on Afghanistan will be among the subjects on its agenda. Ahead of the meeting, Russia’s ambassador to Afghanistan, Andrei Avetisyan, answered questions from Interfax’s Viktor Onuchko about the situation in the country, from which the coalition forces will withdraw in 2014.

Interfax: How is the situation in Afghanistan developing?

Andrei Avetisyan: The situation in Afghanistan is not developing as we would have liked and is showing clear signs of worsening. We are especially concerned about the deterioration of the situationin northern Afghanistan, in provinces that are direct neighbors of our friends and allies – the Central Asian republics.

The infiltration of terrorism and drugs from Afghanistan northward obviously affects our national security directly. That’s why the common tasks of Russia and our allies in the CSTO [the Collective Security Treaty Organization that includes Armenia, Belarus, Kazakhstan, Kyrgyzstan, Russia and Tajikistan] are to fight terrorism and narcotics in Afghanistan. Since we see no substantial progress being made in this area, we are intensifying our efforts in this direction.

Interfax: Next year the international coalition forces will withdraw from Afghanistan, where they have been since 2001. Have they fulfilled their mandate or not?

Andrei Avetisyan:The International Security Assistance Force’s mandate was clear – to fight terrorism. The result of the 12-year implementation of this mandate is also clear: there is neither peace nor stability in Afghanistan. Therefore, there is no question that the mandate issued to the coalition forces by the U.N. Security Council hasn’t been fulfilled.

Interfax: Will Afghanistan’s government be able to ensure the country’s security without external assistance? And, if not, is Russia prepared to help strengthen the Afghan army and security forces?

Andrei Avetisyan: The Afghan security forces have become better prepared, but they are still far from being ready to efficiently maintain security in the entire country on their own, without external assistance. One problem is that the Afghan armed forces lack combat aviation, without the support of which not a single serious operation can be carried out.

We are ready to support Afghanistan in any way possible to help strengthen its security. The one thing we are not prepared to do is to send our troops there.

Interfax: Is there a threat that, as soon as the international forces pull out of Afghanistan, the Taliban and other terrorist elements will come to power once again?

Andrei Avetisyan: That threat does exist. But we all must do everything to prevent this from happening. We need to continue strengthening the Afghan army and police, and assisting Afghanistan in all areas; more than anything else, we need to help their economic development. If the Afghans see a different future for themselves, they won’t keep fighting forever.

But, if the global community decides that Afghanistan has been dealt with – that it’s all over and we can now turn to other problems – then 9/11 will eventually become a reality again. This is what happened at the beginning and the middle of the 1990s.

Interfax: Presidential elections are scheduled in Afghanistan for 2014. How much is stabilization of the situation in the country contingent on the outcome?

Andrei Avetisyan: I wouldn’t single out the elections as the main priority for the international community in Afghanistan. This is an important question. But Afghanistan has other, no less pressing problems, such as economic development and security.

Interfax: What’s your assessment of trade and economic cooperation between Russia and Afghanistan?

Andrei Avetisyan: Our trade and economic cooperation with Afghanistan is actively developing and expanding.

I will give you just one example: we have founded a joint venture with Afghanistan on the Kabul house-building plant. The Russian side has supplied private capital – around $25 million in investment. One or two years from now the plant will be ready to build homes for the Afghans again. It will be modern, affordable housing.

Interfax: In which areas can we still expand our presence in Afghanistan?

Andrei Avetisyan: Cooperation in hydropower generation is developing very well. There is a strong outlook for natural resources production.

The Afghans have decided to concentrate on the construction of railroads. Afghanistan never had railroads before. So there are prospects for our companies in this area too.

We are prepared to participate in multilateral projects as well, such as the construction of power transmission lines from Kyrgyzstan and Tajikistan, via Afghanistan to Pakistan.

We also support and are ready to participate in the construction of the TAPI natural gas pipeline from Turkmenistan, via Afghanistan, to Pakistan and India.

The article is first published in Russian in Inrerfax