Donilon comes to Russia with a message from Obama 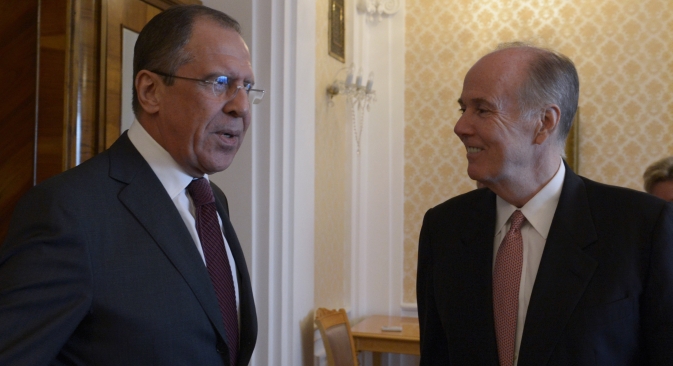 U.S. National Security Adviser Tom Donilon handed Russian President Vladimir Putin a message from U.S. President Barack Obama during a visit to Moscow. In the message, Obama put forward economic proposals and touched on military and political problems – including missile defense and nuclear arsenals. Putin, in turn, confirmed his intention to meet with Obama during the June G8 summit.

Donilon’s visit to Moscow was arranged with difficulty, and the dates were postponed more than once. Initially, the end of February was named as the possible time for the trip and, later, the beginning of March was proposed. In the end, the visit was settled for the end of March.

Obama’s adviser was due to meet the secretary of Russia’s Security Council, Nikolai Patrushev, the head of Russia’s Foreign Ministry, Sergei Lavrov, and Vladimir Putin’s presidential aide, Yuri Ushakov, in Moscow. The Americans also requested a meeting for Donilon with President Putin, but, up to the last moment, it remained unclear whether the Russian president would find a window for this in his schedule.

In the end, Putin joined the talks with Donilon for a short time, and Donilon gave the Russian president a message from Obama.

At the conclusion of the talks, Ushakov stated that the American president’s letter was “couched in quite a constructive tone and contained a number of proposals for deepening bilateral dialogue and cooperation.”

“Some aspects of the ideas set out in the message have been expressed before, and, in some areas, it contains new elements, which our country will study carefully and respond to appropriately,” said Ushakov.

“There are also some considerations in the trade and economic area,” Vladimir Putin’s aide said, “and they are quite specific proposals. They are a development of the ideas that Putin expressed at his meeting with Obama in Los Cabos, when he emphasized that what we need to do above all is to create a safety net that will help us at difficult moments, when the political situation creates some kind of difficulties.”

In addition, Ushakov mentioned that “the message covers some issues in the military and political areas, including missile defense systems and nuclear arsenals.”

The aide to the Russian president reported that “the two sides agreed that Obama and Putin would meet in Northern Ireland during the G8 summit in June, and would then hold full-scale talks during the G20 summit in St. Petersburg,” reports Kommersant.

On the same morning of April 15, Donilon met with Russian Foreign Minister Sergei Lavrov. At the end of the meeting, the Russian minister said that Moscow believes the number one objective is to eliminate the current tension in relations with the United States.

“We heard from Tom Donilon – as we did from [U.S. Secretary of State] John Kerry, with whom I met a few days ago – that they are well aware of the negative effect of a whole range of factors on bilateral relations,” said the Russian minister. “These factors include the ‘Magnitsky list,’ the continuing problems with Russian children adopted in the U.S., the issue of the abduction of Russian citizens, the violation of their rights and many other issues.”

Even before Donilon’s visit to Moscow, experts were saying that it was not worth expecting it to achieve any agreements. The conditions for the visit were far from ideal. On the weekend, Washington and Moscow published two lists of people for whom they were denying visas – the ‘Magnitsky list’ and the retaliatory ‘Guantanamo list,’ each of which included 18 people.

Alexei Pushkov, head of the State Duma’s foreign affairs committee, stated that Donilon would be the first person to feel the negative consequences of the publication of the ‘Magnitsky list.’

Meanwhile Ushakov assured journalists that Donilon’s conversation with Putin was of a positive nature, “as are the signals that the Obama administration is now sending us.”

The expert community is also not inclined to exaggerate the influence of the publication of the lists on the results of Donilon’s talks in Moscow.

Alexei Arbatov, member of the academic council of the Carnegie Moscow Center and chairman of its Non-proliferation Program, told Gazeta.ru that the reciprocal sanctions had scarcely worsened the prospects of the talks.

“I don’t think anything has fundamentally changed. There might have been a slightly more favorable atmosphere, but nothing substantial happened,” he said.

Arbatov believes that Donilon’s visit to Moscow should be seen as a symbolic step.

“I don’t expect any special results in the sense of practical, forward movement in the talks and of the search for agreement. The political atmosphere is very unfavorable toward this. But, as a way of maintaining dialogue between our countries, this visit will have some small significance,” said the expert.

This article is a combined report based on materials from Kommersant and Gazeta.ru.