Russians in America: Chasing a dream or unemployment? 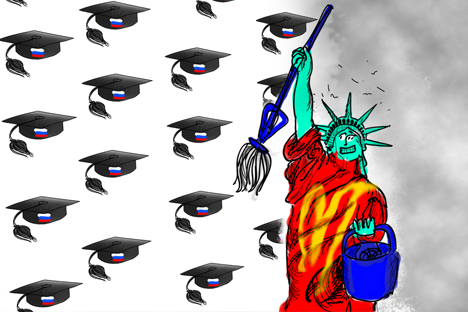 RBTH continues its coverage of the U.S. Work & Travel program by asking three former participants about their experiences.

The Summer Work and Travel program, created as a public diplomacy tool in 1963, allows foreign university students to work and travel for up to four months in the United States, where most work entry-level jobs at resorts, theme parks and restaurants, and experience American culture.

The only firm requirements for participation in the program are a working knowledge of English and to be a full-time student at a university. About 1 million students have participated in the program. Participants come from around the world; some of the top participating countries are Russia, Brazil, Ukraine, Thailand, Ireland, Bulgaria, Peru, Moldova and Poland.

Finding an employer willing to engage a foreign worker was by far the most challenging part. Even getting a Skype interview was nearly impossible. Many American employers are unaware of the program’s existence and simply wonder why a strange Russian guy keeps haranguing them with emails.

At the same time, I feel this aspect offers an essential part of the American experience. After two weeks of fruitlessly circulating my resume, I landed a painter’s job by blind chance thanks to a green card-carrying immigrant who had been there.

I’m proficient in English, so the application process was straightforward. Finding a home was also easy thanks to Craigslist and some friends I had in the Boston metropolitan area. But I can imagine how hard it would be for someone to absorb the culture shock and everything else I described who didn’t have my background and eagerness to absorb everything American.

I’m grateful for this life-changing experience because it allowed me to develop my character. Anyone with basic English could benefit from the program: not so much monetarily, but through immersion in a foreign culture. These experiences will often transform into one’s fondest life memories: Certain days may have been mundane, but not without poetic elements and glimpses of sublime beauty.

But I’m not sure I would go through all that these days since the rules have gotten a lot tighter.

Like the Bridge Program in the 1950s (which brought Barack Obama’s father to study in the U.S.), I think Work & Travel may have a slow but very substantial impact on the participating societies. It gives people with the potential to change things around them a certain worldview and a more thorough understanding of what civil society looks like. It can show them how important liberty is to economic prosperity, something the current government in Russia could learn from.

I think that the high level of rejections may be dictated by caution: with Russia’s challenged political environment, staying in the United States to work may be tempting to many young people. 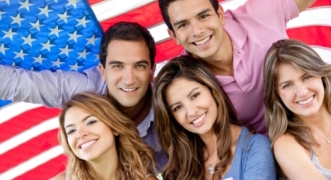 My friend and I went in 2009 and I think, unfortunately, our experience was negatively affected by the global economic crisis. While we made sure to find a job in advance, we arrived at the hotel at Saranac Lake, New York only to discover a very small number of clients.

Economic problems coupled with cold, rainy weather had left the place virtually deserted, while our wages were directly tied to the number of rooms we cleaned up. We had to pay for our own housing at the motel, which also belonged to our employers (they deducted something like $40 week from our salary for this). Sometimes by the end of the week we only have $25 left and soon realized we wouldn’t even be able to cover trip expenses unless we found another job.

First we tried the local McDonalds (which was the only place willing to hire us), then moved on to Dunkin Donuts in Boston because of a friend who let us stay with him for free. In the end we barely broke even, so I could say the days when you come for the money are long gone. But we went for the experience, so were still satisfied in the end.

I can’t say the program impacted me greatly because I’d already travelled to the U.S. at that point, but I think it’s a good opportunity for people to learn a different language and be immersed in a foreign culture.

My take on the high rejection rate is that nowadays unemployment is so high in the United States that the government doesn’t want foreigners taking up the remaining jobs. I don’t know anyone who remained in the country illegally after Work & Travel.

My summer in New York changed me completely: I used to be a complete nerd, but had to develop my character to successfully engage the program. I must have sent a hundred emails from Moscow before finally landing a Skype interview, getting an offer, going for an interview at the U.S. embassy and finally getting a visa.

A lot of things didn’t go as planned, especially in the first days. Some participants face terrible housing conditions, especially when their employers don’t help out. This is where character development and problem-solving skills develop: you realize you have problems you can’t just walk away from and have to solve yourself.

After the first month most people overcome these issues and begin to enjoy their experience, their freedom. Coming back to Russia, there’s a huge culture shock to overcome.

I think the main goal of the program should be able to overcome the Cold War heritage and give nations and cultures an opportunity to communicate outside of official diplomacy. Anti-American and anti-Russian views still abound in both countries, so it seems we’re still at the beginning of this process.

I deeply regret the decision by the U.S. government to reject so many applications. Some Russians do break the law and overstay their visa, so I can understand the need for additional filtering. But not at 90 percent. Personally I knew only Moldovans, Ukranians, Macedonians and other Eastern Europeans who overstayed, but no Russians.