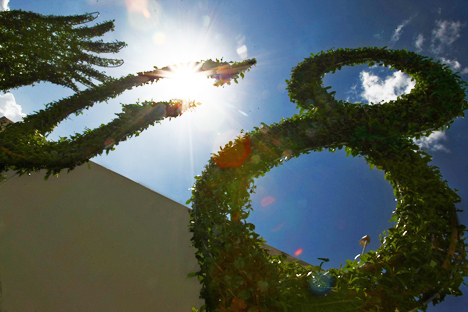 The foreign ministers managed to reach agreements on topical international problems, and these were put into the final communiqué.Source: Alexandr Miridonov / Kommersant

G8 foreign ministers synchronized their watches ahead of the leaders’ summit to be held in Northern Ireland in June.

For two days, the British capital became the center of world politics. On April 10-11, the G8 foreign ministers met at Lancaster House to synchronize their watches ahead of the G8 summit to be held in Northern Ireland in mid-June.

The foreign ministers reviewed all of the main items on the G8’s political agenda: countering international terrorism, non-proliferation of weapons of mass destruction, conventional arms smuggling, regional conflicts and the British Presidency’s initiative for preventing sexual violence against women and children during armed conflicts.

Hollywood star Angelina Jolie caused a sensation by appearing in the company of politicians. As a U.N. special envoy for refugees, Jolie cited horrifying facts about the armed groups that kidnap and rape girls and boys as young as 2 years old. She called for urgent actions to put an end to continuing sexual abuse in conflict zones.

Russia agrees that sexual violence should be condemned and severely punished. Even so, Foreign Minister Sergey Lavrov said the problem should be tackled primarily on the basis of resolutions on violence passed by the U.N. Security Council and General Assembly.

“It is equally necessary to focus serious attention on other negative manifestations during armed conflicts,” said Lavrov. He noted that the fight should be waged “not against the consequences of conflicts but to liquidate the conflicts.

The foreign ministers managed to reach agreements on topical international problems, and these were put into the final communiqué.

“Initially, the positions differed substantially, but common sense and good will enabled us to formulate common approaches proceeding from the need to search for political-diplomatic solutions,” Lavrov told journalists en route from London to Geneva.

“If the DPRK carries out another missile launch or nuclear test, we are ready to take further serious steps,” said British Foreign Secretary William Haig, who hosted the event.

He warned Pyongyang that its aggressive rhetoric was merely exacerbating North Korea’s isolation.

Lavrov, for his part, stressed that Russia was categorically against North Korea’s actions being used as a pretext for building up a military presence in the region by pumping weapons into it and deploying missile defense systems that go beyond neutralization of the real threat posed by Pyongyang’s nuclear missile programs.

In regard to Syria, Lavrov assured members that Russia was not taking any sides in the internal conflict.

At the same time, as the Russian foreign minister observed, Moscow is bending every effort to steer events toward a political settlement that would contribute to the launch of a dialogue between the Syrian government and the opposition, on the basis of the Geneva Communiqué of June 30, 2012.

A continuation of the armed confrontation would plunge Syria into even worse chaos, strengthen international terrorism and undermine the security of neighboring states.

U.S. Secretary of State John Kerry did not hide Washington’s all-out support for the Syrian opposition. While in London, Kerry met with its representatives – including the prime minister of the so-called transitional government of Syria, Gasan Hitto – “to discuss ways of influencing President Assad.”

William Hague and French Foreign Minister Laurent Fabius pressed for the European Union’s embargo to be lifted, in order to enable the Syrian rebels to receive arms from their countries.

There was another meeting of minds on the Middle East problem. The Russian foreign minister admitted that the stalemate on the Palestinian track was lasting too long, insisting the deadlock in the Palestinian-Israeli negotiating process must be broken.

The foreign ministers came out for an early meeting of international mediators on the Middle East conflict. Moscow insists that Arab states – as well as the Israelis and the Palestinians – join the Middle East “Quartet” of Russia, the U.S., the EU and the U.N.

On the whole, Lavrov described the London meeting as useful; although he noted that the communiqué it adopted was not legally binding and could not substitute for U.N. resolutions.