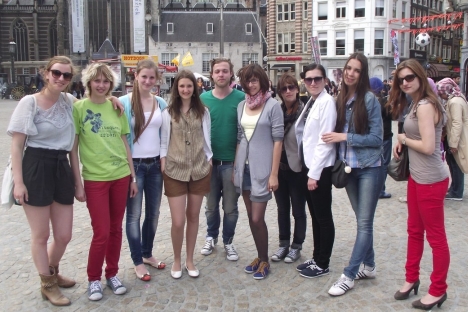 Russia and the Netherlands are boosting collaboration during their bilateral year by fostering more cultural and educational exchange programs. Among these is “The Great Netherlands-Russia Book 2013.”

Almost 315 years after Russian Czar Peter the Great’s first visit to Holland, six Russian students and six of their Dutch counterparts are tenaciously working on a joint cultural project dedicated to the bilateral year between the two countries.

Nearly 15 months before the opening ceremony of the Netherlands-Russia Bilateral Year, the professors from Holland’s Fontys School of Applied Science came to Lomonosov Moscow State University to work on a joint educational project – “The Great Netherlands-Russia Book 2013,” a hardcover book written in three languages – Russian, English and Dutch.

A cover of The Great Netherlands-Russia Book 2013. Source: Windows to Russia organization

“In February 2012, the professors from Fontys Higher School in the Dutch city of Tilburg come up with the idea of a journalism student project dedicated to the Netherlands-Russia collaboration,” said Moscow State University’s Anna Gladkova, one of the organizers of program.  “Of course, we responded to this offer with a great deal of enthusiasm.”

“‘The Great Netherlands-Russia Book-2013’ project is a unique book that contains the information about all aspects of Russian and Dutch lifestyle, culture, cuisine, politics, education, history,” said Gladkova.  “The book also comprises personal stories from Russian students and their Dutch counterparts who share their unique experience.”

More about the Dutch-Russian Bilateral Year:

Not only could the participants of the program improve their professional skills, but they were also exposed to a totally different culture and international experience.

According to Robert Nahon, one of the Dutch organizers of the project, the program aims at shedding light on "background information on different fields of the both countries."

"The Dutch do really have no idea what Russia really is, how the Russians really live and what the Russian culture and soul really means," he said. "The objective is to bring the people more together and to create more undestanding for each other."

Maria Vinogradova of Moscow State University, one of the participants of the program, echoes Nahon.

“The major goal of the program is to show that Russia is not only confined within Moscow and St. Petersburg, but also it has other interesting cities,” she said. “Likewise, Holland doesn’t only consist of Amsterdam and Rotterdam. That’s why, basically, we traveled around provincial cities.”

Initially, the Russian students came to the Netherlands in summer 2012, while their Dutch counterparts visited Russia in the fall. During a 10-day trip, they visited a range of cities and landmarks in Holland and in Russia. While their Dutch peers traveled around Moscow and the Golden Ring cities with Russian guides, students from the Netherlands escorted their Russian counterparts around Amsterdam, Tilburg and other cities.

Russian and Dutch cities which participants of the the Netherlands-Russia educational project visited. View the infographic.

Although some stereotypes were confirmed, some Dutch students changed their mind about Russia as a result of the trip.

“I did not have any expectations in particular about Russia, except for strange food and vodka – just as foreigners think about tulips and windmills regarding Holland,” said 23-year-old Deborah Huisman of Tilburg’s Fontys University of Applied Sciences.  “However, I was surprised by how hospitable some Russians are. The grandparents of a Russian student that accompanied me were very friendly.”

“They prepared a giant and wonderful meal, and we went into the ‘banya’ [Russian bathhouse] in their countryside house. It felt like meeting the true Russian life,” said Huisman.

Likewise, Matthijs Stapel of Holland changed his perception on Russia and appreciated the hospitality of Russians.

“Russians are more open-mined than I thought,” he said.  What he appreciated most was Russian patriotism.  “I liked your kind of love for your country. I think, in Holland, we are not so proud of our country, in comparison with Russians,” said Stapel.

When asked about the impact of the program, Huisman said that it was “useful to learn about a new culture,” contradict prejudices and find common ground.

Regarding “culture shock,” some Dutch students said that public restrooms, bad roads, trains and the behavior of some Russian men were astonishing.

“The toilets [public restrooms] are very dirty compared to Dutch ones, so this was quite a challenge for me,” she said.  “Also, the grandparents of my Russian friend had an outdoor toilet and I was shocked to see this!”

“Roads were also very bad sometimes,” said Huisman. “The guys were true alpha males, trying to carry our luggage all the time! This was a great deal of shock, I had never experienced [this] before in Holland. Also, some of the drinking problems were shocking to me, seeing very drunk people on the train in the afternoon.”

Likewise, Russian students returned from Holland with many impressions.

“It was my first visit to the Netherlands and Europe,” said Maria Vinogradova of Moscow State University. “I fell in love with Holland’s still and provincial life. Of course, big cities are good, but small ones are no less interesting and fabulous! I was living several days in such a city and understood that the Dutch people are so friendly and approachable.”

For example, said Vinogradova, the Dutch people often come together to watch a football match, where they turn a seemingly ordinary party into an unbelievable spectacle – a great show observed with orange t-shirts, caps and penny whistling.

While in Holland, Vinogradova experienced culture shock as well.  Visiting the notorious Red Light District and witnessing all the “amenities” it offers were very astonishing for her.  Even though she did not change her mind about the District, visiting the place helped her understand the Dutch mentality better.

“Yes, many people criticize Holland for over-excessive liberalism,” she said.

Yet the legalization of prostitution, abortion, same-sex marriages and euthanasia is rather a matter of tolerance and freedom that everybody is responsible for, she explains.

“Regarding legalization of light drugs, Dutchmen feel very offended when people see them as ‘drug-nation.’ They voice in unison that the legalization of ‘light drugs’ doesn’t mean that it is good and not dangerous,” Vinogradova said.

“It doesn’t mean that they encourage it. In contrast, they legalize it just to prevent people from taking ‘hard drugs,’ because prohibition policy may backfire. They really do understand the consequence of this problem and try to resolve it in a more liberal way,” said Vinogradova.

Anna Eremina, a 3rd-year student at Moscow State University, picked up some new stereotypes about the Dutch as well.

“They love to whistle, they eat a lot of bread and they live in houses with extremely big windows – so you can see the whole interior while being outside,” she said.