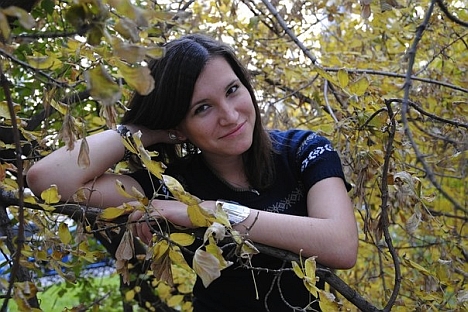 Anna Eremina of Moscow State University is studying in Holland's Windesheim University of Applied Sciences as an exchange student. She believes that the Russian-Dutch bilateral year will strengthen ties between two countries. Source: Anna Eremina

A journalism student of Lomonosov’s Moscow State University, Anna Eremina, went to study in the Netherlands after participating in the joint educational project “The Great Netherlands-Russia Book.” She shares her experience with RBTH.

Anna Eremina, a third-year student at Lomonosov Moscow State University, participated in “The Great Netherlands-Russia Book” project. She is currently studying media and program-making as an international student at Windesheim University of Applied Sciences in Holland.  Eremina talks to RBTH about her experience and what impact it had on her life and future career goals.

Russia Beyond The Headlines: Why did you decide to submit an application for this program?

Anna Eremina: I have been in the Netherlands before, and I am very interested in Dutch culture – Dutch way of life. Besides, even in the beginning, the program “The Great Netherlands-Russia Book” seemed to be very prominent.

For me it was a great opportunity to be one of the authors of the book. Moreover, I consider this international event – the bilateral year – to be important for Russia, because I understand what my country needs to improve its reputation. That’s why I was really glad to take part in this project.

RBTH: What benefits did you get from the program? To what extent did your expectations about Holland come true? What impact did the program have on your life and future occupation?

A.E.: This program gave me an opportunity to do something really good – to meet interesting people, to see exiting places. In addition, this is a rather nice point on my CV.

I hadn’t had any special expectations about the Netherlands. I just liked this country. Maybe the standard of living impressed me. Now I am living there and I recognize more and more how life in the Netherlands is well thought-out. Regarding the impact on my occupation, at the present moment I am studying in Holland for half a year, and this is due to my experience in this project.

RBTH: How did you change your mind about Holland and Dutch journalism after participation in the program?

A.E.: I just understood that, in the educational process in the Netherlands, the main thing is practice – that is very important for journalists. In Russia, a lot of attention is paid to theory.

The media market is very competitive in the Netherlands – as everywhere – and there are no chances to get a job before working several years as a freelancer. Of course, Dutch journalists have more freedom of speech than we do in Russia.

RBTH: What places did you visit while being in Holland?

A.E.: Holland is not as big as Russia, so we managed to visit a lot of cities. For example: We have been to the Tilburg University in the city of the same name, to the Dutch Parliament in the Hague; in Rotterdam we had a excursion on the boat; in Amsterdam we visited the State Museum (Rijksmuseum). Also, we visited Zwolle and Groningen in the north of the country, Nijmegen in the east.

RBTH: To what extent are such programs useful for Dutch-Russian bilateral relations?

A.E.: At first glance, this project was like two different worlds colliding. However, it turned out to be very easy to communicate, because we were very curious about life in each other’s countries.

Normally, you can’t see anything about Russia in Dutch newspapers or on TV channels – and vice versa. There is a lack of information. And, if in Russia we can hear about the Netherlands only in the context of the life of the Royal Family – so-called “light news” – so in Holland there is, in general, only bad news about corruption and breaking human rights. So people come to be scared about Russia.

I think this project and bilateral year itself can help to focus on more positive things, to learn more about another country and to understand customs and traditions better. And this leads to proximity between the peoples.

RBTH: What is the most memorable event from your trip to Holland and this program?

A.E.: What comes to my mind first is the outdoor music festival in Tilburg called “Mundial” [“Universal”]. I remember it because, for me, this is a typical Dutch thing – outdoor street festivals.

Of course, I remember the Dutch-Russian educational seminar in which we took part, because it was very curious to see how Dutch people perceive Russia.

We learned more about collaboration in the educational process between these countries. However, there are more possibilities to extend the partnership between these two countries, in cultural and educational areas that are not yet being used.

I believe that the bilateral year will have an effect in these fields, while our economic collaboration is developing very fast: Holland is one of the most important trade partners of the Russian Federation.

RBTH: What challenges did you face while being in Holland and participating in the program? Did you experience culture shock?

A.E.: I didn’t face any challenges in the Netherlands, because the organization of life is really clear – even for foreigners. But I’ve picked up some new stereotypes about the Dutch for myself. They love to whistle, they eat a lot of bread and they live in houses with extremely big windows – so you can see the whole interior while being outside.