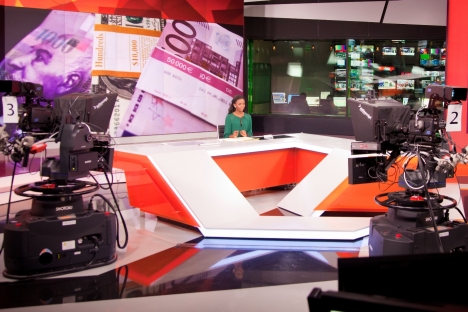 The RT TV channel has set up a news agency to provide video materials for TV stations worldwide and challenge global leaders such as Reuters and AP.

In early April, the RT TV channel has launched a new, ambitious project — the video news agency RUPTLY. The agency plans to provide video materials for TV stations worldwide, thereby competing with such global leaders as Reuters and AP.

In broadcasting the latest news, media outlets rely on video materials provided by agencies, since many cannot afford to send their own correspondents to the scene of the action.

"We want RUPTLY to become a go-to source for video news footage for all kinds of broadcasters, big and small. Just like RT became the alternative voice on the international news landscape, RUPTLY will be the place to get exclusive news stories that other agencies miss or ignore," said RT editor-in-chief Margarita Simonyan in an interview with RBTH.

"The video news footage market is highly concentrated and it is important that international newscasters – whether old media or new media platforms – have a real choice of materials. As for operational goals, we’re looking for the agency to become financially self-sufficient in the long run," she underlined.

RUPTLY will use the very latest technologies to collect and distribute video.

"We’re expanding our international presence – via bureaus and the stringer network – so that we can produce exclusive materials aimed specifically for outside distribution," says Simonyan. "We are also utilizing a ground-breaking delivery platform that enables any media outlet to receive and broadcast live video feed of events around the globe, directly from the field as they are happening."

The decision to set up RUPTLY was based on the success and popularity of RT FreeVideo, the company's first online video agency, which provided media professionals with online access to RT materials and topics in broadcast quality. FreeVideo materials are used on air by more than 16,500 TV channels and agencies in 185 countries, including CNN, Fox News, ABC News, AP, and Reuters.

"RUPTLY is the next logical step for RT. It’s a much more ambitious project," says Simonyan.

The agency's Berlin office already employs or collaborates with over 100 media professionals from around the globe. Every day it receives hundreds of video materials via its developed global stringer network, in addition to RT's 22 news bureaus in 19 countries.

"Berlin is a vibrant city and a growing media hub and we wanted to take advantage of that. It enjoys a central location in Europe; it attracts young, tech-savvy professionals, particularly journalists who are interested in innovation and not in producing the same old news the same old ways. That’s very important for an organization like RUPTLY, which challenges the conventions of how a video news agency operates," remarked Margarita Simonyan.

Clients are offered several options to obtain the materials — from purchasing a single video or broadcast to a full annual subscription.

"A simplified pricing scheme is one of our competitive advantages – it received very positive feedback from our clients during the trial period, when we were testing out various RUPTLY capabilities. Subscribers to the service also enjoy very attractive discount packages," notes RT's editor-in-chief.

The primary language of the platform – and that includes all search capabilities – is English, but all video materials will be available in their original language.

What percentage of RUPTLY materials will be shot in Russia? "Content production will be purely news-driven," replies Margarita Simonyan. "So, if there’s a big news event happening in Russia, RUPTLY crews will be there, but the goal is to report from all the hot-spots, cover all the major stories taking place around the world, especially the ones missed or under-reported by other agencies.

With its first channel launched in December 2005, the RT network now consists of three global news channels broadcasting in English, Spanish, and Arabic, RT America broadcasting from a Washington, DC studio and documentary channel RTDoc. RT has 22 bureaus in 19 countries and territories, with a presence in Washington, New York, London, Berlin, Delhi, Cairo, Baghdad, and other key cities, and employs over 1000 media professionals around the globe.

RT news covers the major issues of our time for viewers wishing to question more and delivers stories often missed by the mainstream media to create news with an edge. RT is the only Russian TV channel to garner two nominations for the prestigious International Emmy Awards and is the very first TV news channel to reach nearly one billion views on YouTube, the world&rsquo;s largest video-sharing platform.