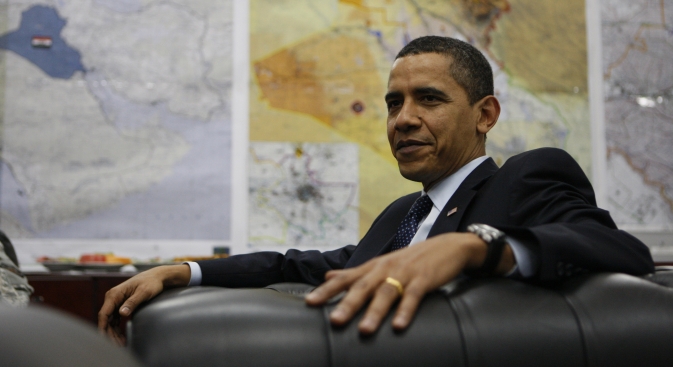 U.S.President Barack Obama makes an attempt to put an end to a “decade of wars” unleashed by his predecessor George Bush Jr. Source: AP

Sergey Rogov, Director of the Institute for US and Canadian Studies and a member of the Russian Academy of Sciences, explains why Washington’s establishment of two giant economic coalitions is pushing Moscow to develop a new strategy.

Every American president since Harry Truman has announced a doctrine reflecting the priorities of each White House occupant. In his State of the Union address to Congress in February 2013, Barack Obama set out his priorities. Globally, Obama intends to put the United States at the head of two giant economic blocks – the Transatlantic and Trans-Pacific Partnerships. This should ensure Washington’s leadership in a polycentric system of international relations.

Simultaneously, Obama – who is trying to put an end to a “decade of wars” unleashed by his predecessor George Bush Jr. – faces the task of beating an orderly retreat from the international arena without letting it turn into a panicked flight. This scheme has become a key component of the “Obama doctrine”. It is based on the concept of a “smart force”, which emphasizes non-military means for securing U.S. influence in a multi-polar world.

The U.S. share of global GDP has shrunk from 23 to 18 percent over the past decade, while the share of mainland China has risen from 10 to 15 percent. Unless the Chinese economic development model hits an impasse, China will catch up with the U.S. in terms of GDP as soon as this decade, and will become twice as big on an exchange-rate basis by the middle of this century.

The U.S. president’s National Security Advisor Tom Donilon has admitted that the White House had decided that a Trans-Pacific Partnership (TPP) could help the U.S. to remedy the situation. It’s on this basis that Washington is planning to set up a free trade zone in the Asia-Pacific region.

If the TTP becomes a reality, the U.S. will account for three-fourths of the partnership’s combined GDP. This will ensure American dominance within the new economic alliance.

At the same time, the TTP is an alternative to the ASEAN+3 arrangement promoted by Beijing (a regional economic coalition of China, Japan, and South Korea plus the ASEAN members). After the accession of India, Australia, and New Zealand, the group has been expanded to ASEAN+6.

China, accounting for half of the combined $17 billion GDP of the alliance’s 16 members and with a population of more than three billion, should play the dominating role in it.

It was this situation that led Obama to declaring the TTP a top priority for his administration. Washington cannot allow Asia to integrate economically under Beijing’s tutelage. The two different projects in this huge region are incompatible.

Beijing’s reaction to Washington’s plan has been extremely negative.

“The United States has been strengthening its old military alliances, undermining the fundamentals of peace in South East Asia, fanning territorial disputes between China and its neighbors, establishing a united front against China, forcing the creation of a TTP, and derailing the independent regional process of cooperation and integration,” The People’s Daily said.

An acute geoeconomic and geopolitical rivalry between the U.S. and China is thus emerging in the Asia-Pacific region, and it’s apparently bound to last for years if not decades.

{***Regional vectors and a global scenario ***}

Regional vectors and a global scenario

The new U.S. strategy, however, is not limited to the Asia-Pacific region but is of a global nature. The establishment of the Transatlantic Partnership (TAP) together with the TTP is a priority for Obama’s second administration.

As the globalization process has slowed in recent years because of an inability to overcome disagreements between developed and developing countries, Obama’s administration has focused on establishing interrelated regional economic blocks that comprise most developed democracies in North America, Europe, and the Asia-Pacific region. The White House expects to achieve the establishment of the TAP and the TTP before Obama’s second term expires.

Obama is thus planning to place the United States at the helm of two “rings”, two giant regional economic coalitions, the Transatlantic and Trans-Pacific Partnerships, which account today for 20 percent of the world’s population, 65 percent of global GDP, and almost 70 percent of global exports.

China looks rather modest compared to this: 19 percent of the population, 15.8 percent of GDP, 7.5 percent of capitalization, and 10 percent of exports. Even with account taken of China’s growth down the road, Beijing would still trail far behind the two U.S.-led regional coalitions. This should secure a solid leadership position for Washington in the polycentric system of international relations.

Washington has expressed concerns over the consequences of China’s armed forces modernization. An annual Worldwide Threat Assessment of the U.S. Intelligence Community released on March 12 said that China had a “limited, albeit growing, capacity for power projection” not only in the Pacific but also in the Indian Ocean.

According to RAND Corporation estimates, over the next 20 years China’s gross domestic product and defense budget could exceed those of the United States. China could therefore become “a more capable opponent.”

The Pentagon has already announced a shift in the U.S. military focus to the Asia-Pacific region. Washington has openly called for turning the TAP into an “economic NATO”.

The defense budget of the TAP (i.e. of the U.S. and the European NATO members) will account for around 60 percent of global military spending. With account taken of the U.S. allies in the Asia-Pacific region, this share would exceed 65 percent.

Moreover, the share of both U.S.-led coalitions of weapons production spending will amount to at least 80 percent, and of defense-related R&D to more than 90 percent. Neither China nor even the BRICS can compare to the TAP and the TTP on those measures.

The world in the middle of this century

The long-term US strategy, however, could fail unless the Obama administration manages to overcome the existing disagreements with its allies and partners. The differences between the economic interests of Washington and its allies can be bridged, but doing so will require mutual concessions, something neither the U.S. nor the other TTP and TAP participants seem to be ready for at the moment.

Washington hasn’t yet invited Moscow to take part in these giant coalitions. China isn’t exactly welcoming Moscow to the ASEAN+6 comprehensive regional economic partnership either. This makes one think about Russia’s place in a new configuration of international relations.

Russia’s “critical mass” is small – approximately 2 percent of the global population and 3 percent of the GDP. While this share would grow in the event of successful Eurasian integration, it would still lag far behind the global giants.

Geopolitical and geoeconomic loneliness within a new system of international relations is fraught with big risks. Although just like the United States, Russia has access to both the Atlantic and the Pacific Oceans, Moscow takes no part in the integration processes in the West or the East.

It is necessary to look for a way out of this situation. Thanks to its geographical position, Russia could become a continental link between the Pacific and Euro-Atlantic integration efforts.

Sergey Rogov is Director of the Institute for US and Canadian Studies and a member of the Russian Academy of Sciences.