The Korean crisis: The peak is over, what next? 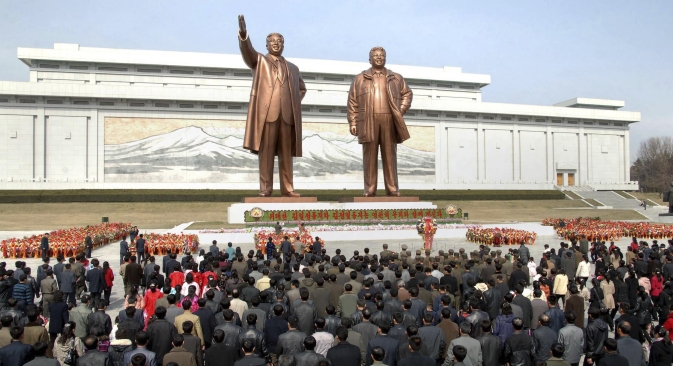 Experts warn diplomats not to overlook the chance to continue talks on denuclearization of the Korean Peninsula.

The peak of the crisis on the Korean Peninsula that threatened to escalate into a military conflict is behind us, experts believe. It is important not to let the “window of opportunity” close and establish a dialog with North Korea. Instead of the six-party talks, which many analysts think have fizzled out, one option is to call a large-scale conference involving a wide circle of countries.

Is the worst behind us?

Many analysts expected the crisis on the Korean Peninsula, which was triggered by North Korea’s third nuclear test in February, to hit its peak on April 15. This is the day North Korea marked the 101st birthday of Kim Il-sung – founder of the Democratic People’s Republic of Korea and the grandfather of the country’s current leader.

Experts did not rule out that a ballistic missile could be launched on the occasion, as a “gift” to the country’s leader and its people. But that did not happen.

“The crisis is easing. Of course, it cannot be kept up forever, but tensions will persist at least until the end of the month, while the U.S. is holding military exercises on the peninsula,” Alexander Panov, senior research fellow with the Institute for U.S. and Canadian Studies at the Russian Academy of Sciences (RAS) and former Russian ambassador to South Korea, told a press conference in Moscow.

His words were echoed by Alexander Vorontsov, head of the Korea and Mongolia Department at the RAS Oriental Studies Institute.

“I have a feeling that the easing of tensions over the past few days indicates that some contacts are already under way, perhaps through confidential channels," he said. "That trend should be consolidated.”

Ways out of the crisis

As tension on the Korean Peninsula eases, experts believe it is important not to miss the opportunity to reach a diplomatic settlement.

However, Panov has pointed out that there are no viable mechanisms or concrete proposals to that end.

“We, the Republic of Korea and the United States have been saying that matters should be resolved through dialog. But what dialog? What would a dialog be about? The six-party conference, in my opinion, has done its bit and there is no point in reviving it. It has failed to prevent nuclear tests or missile launches,” said Panov.

The participants in the six-party talks on denuclearization of the Korean Peninsula, which began in 2003 and effectively broke down in 2008, are North Korea, South Korea, China, Russia, the United States and Japan.

Panov believes a more representative conference could be an alternative to the six-party talks.

“I think a peace conference on the Korean Peninsula should be held,” Panov said.

“There should be a multi-pronged approach," he proposes. "We should bring together not six states, but more: All the five United Nations Security Council members, observer countries, Switzerland, Poland and perhaps some ASEAN states. The problem should be discussed in a comprehensive manner – meaning the establishment of peace, confidence building, arms reduction, denuclearization and the forging of good relations between North and South.”

The expert noted that such a broad conference would be a better place for “trade-offs,” or “making concessions on some things in exchange for some other things.”

Vorontsov agrees that such “an ambitious plan” is preferable. First, however, he believes that it is necessary to establish peace on the Korean Peninsula. The Armistice Agreement signed after the end of the 1950–1953 Korean War – and abrogated by North Korea in early March against the background of rising tensions – should be replaced by a full-fledged peace treaty.

However, director of the Center for Energy and Security Studies, Anton Khlopkov, has expressed doubt that a full-scale discussion at this stage is possible. It has to be thoroughly prepared, bringing the academic community into it, he believes.

Time is of the essence

Experts are unanimous in thinking that the “window of opportunity” for talks will not be open forever.

“If no ideas are put forward, like before, and the United States is reluctant to talk with North Korea without preconditions, then the North Koreans will most probably set off another nuclear device and launch a missile,” Panov said.

“I share my colleagues’ pessimistic view that this is a vicious circle,” said Miles Pomper, senior research associate at the James Martin Center for Nonproliferation Studies. “Crises flow into each other. Either Pyongyang or Washington must show the will to get out of the crisis.”

The latest crisis on the Korean Peninsula was triggered by the third nuclear test carried out by North Korea on February 12, 2013. The United Nations Security Council responded by approving fresh sanctions, and the United States and South Korea responded by holding large-scale military exercises close to the North Korean border.