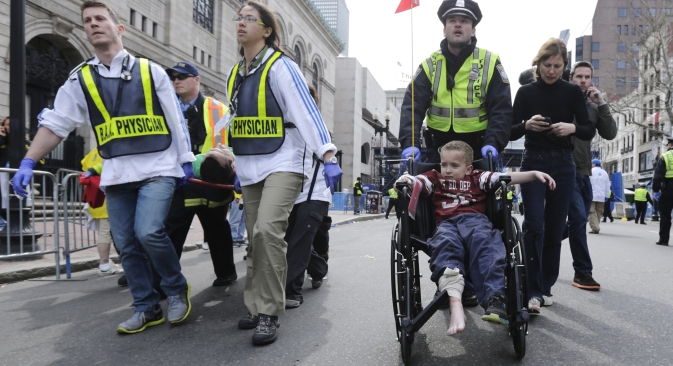 The investigation into the Boston Marathon bombing has led U.S. authorities to the North Caucasus to look for links that the Tsarnaev brothers may have had with extremists there. Experts are convinced, however, that the brothers acted alone and had no links to any terrorist organization.

Research into the recent terrorist attack in Boston has led U.S. authorities to the Russian Republic of Dagestan where the parents of the Boston bombing suspects live and where the elder brother Tamerlan may have had contacts with extremists.

Russian media reports suggest that a party from the U.S. diplomatic mission in Moscow arrived in Makhachkala, Dagestan on Wed. April 24 to talk with the Tsarnaev brothers’ parents.

The possibility was raised of the parents returning to the United States to take part in the investigation. Some reports say the American group included members of the U.S. special services. Russia is cooperating in the investigation, as agreed between Presidents Vladimir Putin and Barack Obama.

The investigators are looking into the Tsarnaev brothers’ contacts in Dagestan, especially those of the elder brother who died in a shootout with the police after the bombing. Tamerlan visited Dagestan in 2012.

According to Alexei Filatov, vice president of the veterans’ association for Russia’s elite Alfa anti-terrorist unit and a former FSB officer who took part in hostage situations, “the FBI agents who arrived in Makhachkala are looking into the possible impact of the trip to Dagestan on the Tsarnaev brothers. This is more of a formality because they need to get the full picture in order to understand what had prompted them to commit their terrorist act.”

Filatov said that Tamerlan probably had some contacts with members of a gang, which is why the Russian special services tipped off their U.S. colleagues about him, but neither side put Tamerlan under surveillance.

“If our special services had serious grounds to suspect that he was a terrorist, he would have been detained when he came to Dagestan in 2012,” said Filatov. “But that did not happen, which shows that the elder Tsarnaev merely had a contact with the members of the gang, but that he himself was not a member.”

This view is shared by journalist Ivan Sukhov, an expert on the Northern Caucasus.

“The Tsarnaev family was apparently deeply religious, so the brothers were exposed to ideological influence," he said. "There is reason to believe that during his brief visit to Makhachkala Tamerlan Tsarnaev went to a mosque on Kostrov Street that is under the surveillance of the Russian special services. Tamerlan may have known some members of its armed wing personally."

"You don’t need to have lived in the Caucasus for years to establish such contacts; a trip lasting a few days would be enough. But the Boston bombing does not look as if it had been staged by a sabotage network from the Northern Caucasus, that would be a stretch,” Sukhov added. “There was ideological influence, but the terrorist attack from the outset looks like an act by the two brothers and not an act of sabotage commissioned by some clandestine group.”

“The Tsarnaevs maintained links with their relatives in the Caucasus. They took an interest in the Northern Caucasus theme, as witnessed by their accounts in the social networks; and they discussed U.S. actions in Iran and Iraq in much the same spirit as they are discussed in every café in the Caucasus,” Sukhov said. “But what happened in Boston looks amateurish, no organization stood behind it – although only the investigation will tell us for sure.”

Sukhov stresses that the Russian special services are cooperating with the investigation.

“This may bring it home to the United States that it has a common enemy with Russia,” he said. “To some extent, the situation is reminiscent of the window of opportunity for cooperation and mutual assistance between the two countries that opened after 9/11. The question is what will young Russians in the Northern Caucasus think about such cooperation?”

“It was unimaginable before. The need to open FSB and FBI offices in the U.S. and Russia respectively has been mooted for years. The latest situation proves that this is necessary,” Gudkov said.

He added that the Russian special services can help the Americans to clarify the circumstances under which Tsarnaevs went to the North Caucasus, what they were doing there and who they met. Gudkov does not believe the Russian law enforcement bodies committed an oversight since they passed the information on the brothers to the U.S. special services and there had been no facts or tip-offs on the Tsarnaevs.

“The readiness to cooperate in investigating the Boston bombing declared by Russia and the U.S. looks like a spark that may lead to broader and more fruitful cooperation between the special services of the two countries, but I would not overestimate it significance,” said Yuri Kobaladze, former press secretary of the Russian Foreign Intelligence Service.

“The fact that the FSB tipped off the FBI in 2011 about possible extremist links of the Tsarnaev brothers will certainly be helpful in strengthening not only professional ties, but in improving the climate of trust between the USA and Russia,” he said.

But, Kobaladze added, the fact that the tip-off led only to a superficial interrogation and was not seriously studied in the United States should lead to a probe into all the circumstances of the use of the information received from Russia.

“They need to sort out why not enough attention was paid to the information at the time. Russian security agencies have extensive experience in combating terrorism and their competence is not in doubt. We should improve the interaction between the two countries in this area,” Starshinov said.