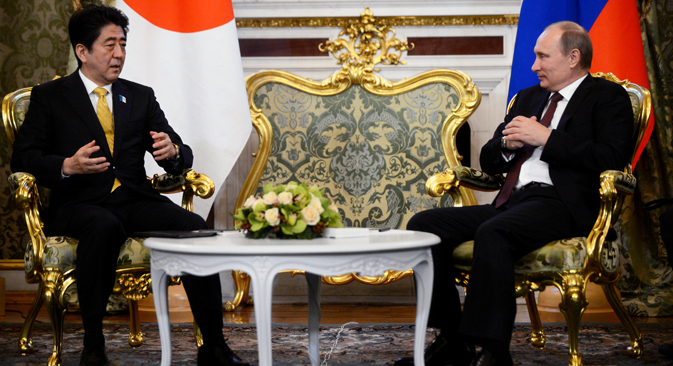 Russia and Japan are going to conclude a peace treaty. Source: Reuters

Before his visit to Moscow as prime minister of Japan, Shinzo Abe sat down with ITAR-TASS and Rossiyskaya Gazeta to talk about the state of bilateral relations between the two countries and the meaning of power.

Before his visit to Moscow as prime minister of Japan, Shinzo Abe sat down with ITAR-TASS and Rossiyskaya Gazeta to talk about the state of bilateral relations between the two countries, cooperation in the Asia-Pacific region and the meaning of power.

ITAR-TASS/ Rossiyskaya Gazeta: What are your plans for this visit to Russia? Generally speaking, what role does Russia play in Japan's foreign policy?

During the upcoming visit, first of all, as prime minister, I would like to establish a personal rapport with him. Secondly, I would like to explore opportunities for future comprehensive development of our relations.

Russia and Japan step up bilateral ties at Russian-Japanese Forum

Thirdly, I hope to agree to a new start to the talks on a peace treaty between our two countries – which has so far seen no progress – to give an impetus to our relations and to make sure that this visit opens up new, long-term opportunities for their development.

IT/RG: You have mentioned that you would like to discuss the peace treaty issue. I am reminded of President Putin's description of this situation as a "hikiwake." What term would you use to describe the current state of affairs?

S.A.:World War II ended 67 years ago, yet Japan and Russia still do not have a peace treaty. I don't think this situation could be described as normal. This is what President Putin was saying, too.

A peace treaty, I am convinced, would mark a breakthrough in our relations. I am very encouraged by [the fact] that President Putin welcomes a dialogue with me on this issue. There is no magic bullet that could resolve this matter.

However, by establishing a personal relationship of trust with the Russian president during this visit, I would like to show that we have the same political will to give a new start to our negotiations.

IT/RG: What do you think Japanese-Russian cooperation in the Asia-Pacific region should be like? And could you please outline your vision for resolving the North Korea issue?

S.A.: I think the security situation in the Asia-Pacific region is rather dangerous at present. Turning it into a region of peace and stability is, without a doubt, in the interests of both Japan and Russia.

North Korea's actions and statements are clearly extremely provocative. The whole of the international community – including Japan and Russia – should make it clear to North Korea that this behavior will not be to its advantage.

I think that cooperation between Russia, Japan, the U.S., China, South Korea and other members of the international community would make a big contribution to peace and stability in the region.

As regards China, it is not only Japan, but many other countries, too, are concerned by its actions in the South China and East China seas. There is a strategic complementarity between Japan and China.

In the economy, in particular, our relations are unbreakable. It is important to have a mutual understanding of this. We keep our door open for dialogue.

I think it extremely important to promote Japanese-Russian security cooperation. It has recently made some visible progress.

Between 1998 and last year, Japan's Maritime Self-Defense Force and the Russian Navy conducted as many as 13 joint search-and-rescue drills. Work is under way to step up security cooperation through various channels.

IT/RG: Your family is known to have had an interest in developing relations with the Soviet Union and now with Russia. Your father, during his time as foreign minister, visited our country and was openly sympathetic to it. What does Russia mean to you?

S.A.: For my father, as a politician, one the tasks was to sign a peace treaty with the Soviet Union in the lifetime of the current generation. A month before his death, he had a meeting with President Mikhail Gorbachev, who became the last foreign leader he talked to.

During a visit to Moscow in 1986, we set up a Japanese corner in the Botanical Gardens of the Soviet Academy of Sciences. I accompanied my father and was present when those trees were being planted.

Back then, they were just a few saplings. Now, 27 years on, there are 220 sakura trees growing there; and, I have been told, every spring they bloom beautifully. I would like to see Japan's relations with Russia blossom likewise.

In 2001, together with then Prime Minister Yoshiro Mori, I took part in the Japanese-Russian talks in Irkutsk; in 2003, I was part of the official delegation accompanying Prime Minister Junichiro Koizumi on his visit to Moscow.

I remember going to a performance of the ballet, "The Nutcracker," together with Prime Minister Koizumi at the time. Both those visits took place during extremely cold weather – I had never experienced frosts like those before – but we received a very warm welcome from the Russians.

I have developed an impression of Russia as of a country with a sophisticated culture, great literature and music, developed technologies.

IT/RG: You have said that you are going to treat Muscovites to some Japanese cuisine. How are you going to do it?

S.A.: One of the characteristic features of Japanese cuisine is its ingredients, the products that go into it – fish, vegetables. The key is to make full use of their particular features, to make them come alive.

I think this is one of the special things about Japanese cuisine. Besides, it is very good for you, health-wise. I would like people in Russia to try real Japanese food. We have Russian restaurants too, but some of them do not serve real Russian food.

It is difficult for me to know the difference. That is why we would like to use our visit to present true Japanese cuisine and are bringing a lot of food with us.

IT/RG: This is your second time as prime minister. You are already familiar with what power is. What is it to you? What does it taste like?

S.A.: Power means responsibility. As for the taste… It would be wrong to assume that it tastes like honey. It has a bitter taste. Those who do not have power will probably not understand.

First published in Russian in ITAR-TASS and Rossiyskaya Gazeta.