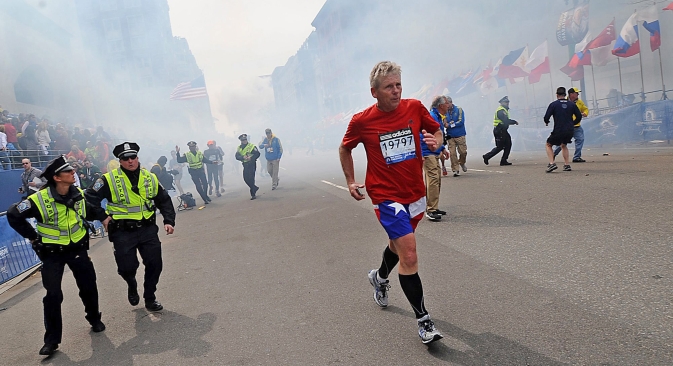 It remains to be seen whether the Boston Marathon explosion will draw the U.S. and Russia closer in combating terrorism. Source: EPA / ITAR-TASS

In the wake of the marathon bombings, Dmitry Babich recalls the Chechnya of the Nineties and the lessons it can teach us about Islamist terrorism.

The televised images of the deserted streets of Boston and Cambridge, two of America’s oldest university centers, were a sad sight for the many former international students who studied there, myself included.

At the beginning of the 1990s the rebellious Russian region of Chechnya was already making news in the international press, but most of my friends found it hard to find it on the map. Judging by recent phone calls to my contacts there, this is no longer the case. The tragic events surrounding the Boston Marathon have not only taught many of the more outward-looking Americans where Chechnya is, they have also challenged some of their beliefs.

Why did the Tsarnaev brothers – one a promising boxer, successfully married into an affluent American family; the other a relatively well-to-do student – do it?

The western press is searching for the culprits in a predictable direction. One commentator wrote that the Tsarnaev brothers were not die-hard Islamists, just “lone wolves,” “typically white and equally disenchanted, who have so often shed blood in the U.S.”. (The Oklahoma City bomber Timothy McVeigh is, of course, mentioned.)

Another suggested the brothers had simply reacted to an insult about their ethnic origins or religion. Rather simplistic, as the elder brother Tamerlan was on a Russian security services blacklist from at least 2011. The FBI and the CIA were twice warned about Tamerlan’s extremist leanings by the FSB.

These people are, however, untroubled by the facts.

Their biggest regret seems to be not the loss of life but that Boston may prove President Vladimir Putin was right. Many liberal-minded people are searching for an antidote to this poisonous “pro-Putin doubt.” Don’t say the president had a point when he kept saying Islamist terrorism, in all its Chechen, Arab or other reincarnations, was a threat to both the U.S. and Russia. And, heaven forbid, don’t say it’s also a threat to Europe.

The problem is that the view that the Tsarnaevs had no connection to Islamist extremism in their native Russian North Caucasus just doesn’t stand up to scrutiny.

If Tamerlan was intent on acting alone, why did he watch and spread jihadist videos on the internet, and why did he make a six-month visit to Dagestan – a hotbed of Islamist extremism – in 2012? How could the Russian security services have penetrated his thoughts, sending a signal to the FBI about Tsarnaev’s extremist leanings?

Of course, it is possible to describe Chechen rebels as “nationalist”, even democratic, just intent on shedding the yoke of Moscow.

Presumably, the long war and subsequent suffering “radicalized” them. This is a good parallel to the widespread view of nationalist Syrian rebels who can be provided with “lethal aid” if only they promise not to pass it on to the Islamist jihadis.

The problem is that in the rebel movement in Chechnya of the 1990s, just like in Syria now, the border between nationalist democrats and jihadist extremists is dangerously blurred. A lot of jihadis are happy to use nationalist sentiment and even talk about free elections – if it helps get them closer to power.

On my return from the Chechen capital after acting as an interpreter for reporters, I listen as the embattled “president” of the separatist “Chechen Republic of Ichkeria,” Dzhokhar Dudayev, speaks on the radio station Echo of Moscow.

Dudayev is angry: The Russian army pushed his forces out of Grozny, Chechnya’s capital, with the West giving only symbolic support to pro-Dudayev Russian human-rights activists. Russia seems to be close to victory in a war that it started rather clumsily in December 1994.

Addressing a handful of mostly western journalists at his hideout, he rages: “Don’t think you can stay out of this in the West. Don’t even dream of your living your rosy-cheeked life while we are dying here.”

A few days later Dudayev was killed by a Russian missile. His successor, “Ichkeria’s president” Aslan Maskhadov, tried to be more diplomatic. But Maskhadov’s head of cabinet Shamil Basayev, believed by Russia to be behind heinous acts of terror, including the Beslan siege of 2004, was more candid when talking about the West.

“You ate sweet things and slept nicely while we were killed,” he barked into the microphone of my boss, Pascal Verdeau of the French television channel France 3, when I returned to Chechnya as an interpreter in 1997. “Don’t even dream you can sit out our next war with Russia!”

In 1997-1999, “Ichkeria” became a dangerous place for foreign journalists. At least two dozen journalists were kidnapped and many were never seen alive again. And in August 1999, Basayev, with a small army of Chechen Islamists, attacked Dagestan, saying he wanted to help an embattled Islamist minority there.

In the 1990s, the western press praised Basayev, before he took between 1,500 and 2,000 people hostage in a hospital at Budyonnovsk in southern Russia, which resulted in the deaths of 147 people. After 1999, the conspiracy theory that he was a “Russian provocateur” who lured Chechnya into another war with Russia, became predominant.

My impression was different. Basayev never stopped trying to be both anti-Russian and nationalist; anti-Western and jihadist. For him, as for Tamerlan Tsarnaev, Russia and the U.S. were parts of the defunct, decadent civilization he wanted to destroy. So the attacks in Russia and Boston are not mutually exclusive – they are complementary.

“Anti-western and especially the anti-Semitic element was very strong in the Chechen separatist movement even before it became predominantly jihadist,” says Sergei Markedonov, an expert on the North Caucasus.

In the view of Gordon Hahn, an analyst monitoring the so-called Caucasus Emirate (the biggest Islamist jihadist movement in the North Caucasus), the modern rebels view Russia and the West as two “Satans” and believe they must fight them in the manner of Ayatollah Khomeini during the 1980s.

This opinion was echoed by Putin, who said, while answering a question about Boston: “We always said that we [Americans and Russians] should not limit ourselves to declarations about this [Islamist] common threat. We should act – we should co-operate with each other. And these two criminals confirmed the rightness of this point of ours.”

Global war on ‘the two Satans’

The scale of the Boston attack would be less shocking in Chechnya’s neighbours Dagestan or Ingushetia. In Dagestan especially, there are bombings at events such as parades and football games every three or four months. Just one example of this terrorism has rightly led the U.S. to reassess the Islamist threat at home and abroad.

Russians, Americans and Europeans know their differences and disagreements. But to Islamists they are not important. They use Russo-Western differences for their own ends. And the West frequently falls into the trap. A typical example was coverage given to Zubeidat Tsarnaeva, mother of the two suspects, herself accused of extremist leanings in the FSB’s affidavit to the FBI on Tamerlan.

She claimed her sons were “set up” by special services and is now treated with healthy scepticism by the Russian and American media.

But after a similar terrorist act in Moscow, Western media may well have given credence to her words. We saw it after the Budyonnovsk hospital outrage; the 1999 apartment bombings which killed 293; the Moscow theatre siege in 2002 which left 131 dead; and the Beslan school assault that left 334 dead. In these cases ordinary Britons and Americans were given the impression that the Russian government was somehow the main culprit.

We cherish our differences, while Islamist terrorists seek to use them.