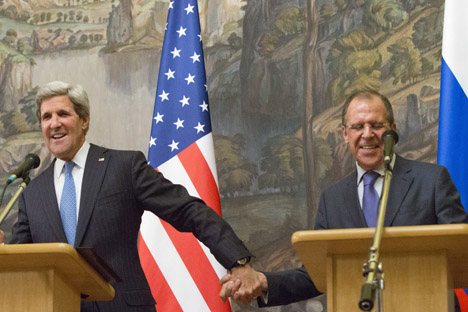 Russia and the Untied States have agreed on closer cooperation between their special services regarding the possible use of chemical weapons in Syria. Source: AP

According to Russian foreign minister Sergei Lavrov, such a conference may take place as early as the end of May.

Moscow and Washington have agreed to call an international conference to help resolve the Syrian crisis. The announcement was made late on the night of May 7 at a joint press conference in Moscow by Russian Foreign Minister Sergey Lavrov and U.S. Secretary of State John Kerry.

The conference was the end of a long day for Kerry, who was visiting Russia for the first time as secretary of state.

Earlier in the day, Kerry laid flowers at the Tomb of the Unknown Soldier, talked to World War II veterans, met with President Vladimir Putin and had talks with Lavrov. He said that he was honored to visit Moscow ahead of the May 9 Victory Day celebration.

Kerry told journalists that he had a substantive talk with President Putin. Although the meeting began three hours behind schedule, it lasted two-and-a-half hours.

During the meeting, Putin confirmed that he had studied U.S. President Barack Obama’s recent address and that Moscow was preparing a response that would soon be delivered to Washington. Putin also said that he was looking forward to meeting Barack Obama at the G8 summit in Northern Ireland, which is scheduled to take place in mid-June.

“We sensed the deliberate intention of the American side to develop bilateral relations in the economy, in political dialogue, and in the international arena, and we share this attitude,” Lavrov said.

Kerry added that Russia and the United States have some differences, but noted “our cooperation has been outstanding” when it comes to what really matters – START II, the WTO, Iran, North Korea and Afghanistan.

U.S. Ambassador to Russia Michael McFaul echoed Kerry in a statement to RBTH: “I believe that the engagement between our key ministries and agencies, including the Ministry of Foreign Affairs, is crucial in the search for solutions to the most important challenges of the modern world,” McFaul said.

A source in the Russian Ministry of Foreign Affairs said that at least five documents were close to finalization and may soon be submitted to the presidents of both countries.

These are the agreements on: cooperation on non-proliferation of weapons of mass destruction, cooperation on counterterrorism efforts, strengthening economic ties and interdepartmental contacts, and confidence-building measures in cyberspace.

However, these issues all took a backseat to the Syrian conflict during the talks. At their press conference, Kerry and Lavrov said that an international conference should be summoned to address the Syrian issue in pursuance of the Geneva communiqué adopted last June.

Lavrov said that such a conference should be called “as soon as possible.” This may happen as early as late May, he said.

Lavrov also said that Moscow and Washington had managed to agree on closer cooperation between special services concerning the use of chemical weapons in Syria.

He said that Russia is concerned “as much as the United States” is over this matter, adding that the “issue should not become an object of provocation,” until the circumstances of the use of chemical weapons have been clarified.

For his part, Kerry said that the issue of arms supplies to the Syrian opposition, on which many American congressmen and senators insist, will be decided only following a thorough investigation into reports of the use of chemical weapons in Syria.

Kerry said he hoped that a transitional government would be formed in Syria as a result of the conference. In his words, Washington and Moscow have common interests in Syria, including their commitment to having a stable situation in the region and combating the spread of extremism.

Specifically, the White House is concerned that “Syria has become a magnet for extremists.”

Meanwhile, it has been reported that President Obama has extended for one year the national emergency originally declared in connection with the actions of the Syrian government. The decision enables the U.S. administration to keep and, if necessary, tighten sanctions against the Syrian authorities.