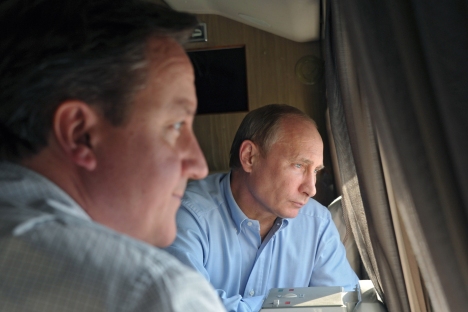 Joint provision of Sochi Olympics security is the first step towards interaction between security services of Moscow and London. Source: AP

Despite a falling out between MI6 and the FSB over Litvinenko in 2006, the special services anticipate cooperation in light of the Boston bombings and the upcoming Olympic games in Sochi.

Following his meeting with Russian President Vladimir Putin in Sochi on May 10, the British Prime Minister David Cameron announced that Russia and the UK will resume intelligence cooperation.

In a talk with journalists after the meeting with Putin, where the Syrian crisis and bilateral economic relations were discussed, Cameron said the talks also covered the security of the 2014 Winter Olympics in Sochi.

“Therefore, President Putin and I have agreed that there should be limited cooperation between our security services for the Olympics.”

Putin’s spokesman, Dmitry Peskov said: “The engagement between the special services was interrupted at the initiative of the British side, but we are pleased to see the willingness to cooperate for the sake of having a secure and safe Olympics in Sochi.”

In 2006, the UK named former Russian FSB agent, Andrei Lugovoi, as the chief suspect in the poisoning of Alexander Litvinenko by polonium-210.

London demanded that Lugovoi be extradited to the UK, but Moscow refused. The spat grew quite nasty, and the British ambassador to Russia publicly advised the Kremlin to amend the Constitution to lift the ban on extradition.

In 2011, Cameron refused to meet halfway with Moscow on the matter during talks with Dmitry Medvedev. “The two governments differ on this issue. We are not downplaying it in any way,” the British premier said then.

The situation is changing, and the Sochi Olympics is not the only security issue currently on the agenda.

Before the Boston bombings, the United States special services ignored Moscow’s warnings about the threat coming from the Tsarnaev brothers.

Russian and U.S. special services have cooperated since the fall of the Soviet Union. The cooperation was stepped up even more with the events of 9/11.

However, the American side has always been somewhat "arrogant" about reports from Moscow, says Sergey Shestov, a reserve KGB colonel and the president of the association of Special Forces Veterans, Vympel.

According to The Washington Post, the FBI could have thought that Tamerlan Tsarnaev posed no threat: "It had reason to be sceptical about Russian warnings about émigré Chechens, many of whom are wrongly regarded by Moscow as terrorists.”

The U.S. Congress is also asking the FBI tricky questions. Republican senator, Lindsey Graham, has criticized the FBI for failing to prevent the attack.

“Don’t you think one of the first things the FBI would do is say, ‘Have we interviewed anybody in the Boston area that may fit the profile of doing this?’ How could his name not pop up, the older brother? And when you have the photo the whole world is looking at, how could we not match that photo with him already being in the system?”

On May 7, FBI Director, Robert Mueller, paid a visit to Moscow to hold talks with his Russian counterparts. It was the U.S. Ambassador to Russia, Michael McFaul, that announced the visit on Facebook.

FBI spokesman, Michael Kortan, told the Associated Press that Mueller and the heads of the Russian security services discussed the investigation into the Boston bombings.

The publicity around the visit is expected to mitigate criticism of the FBI, and so is the statement by the Secretary of State, John Kerry, on the first day of his Moscow visit this May: “I’m glad that our specialists are working together to investigate the Boston attack. We appreciate this.”

Editor-in-chief of Natsionalnaya Oborona (National Defense) magazine, Igor Korotchenko, said before Cameron’s visit to Sochi that the United Kingdom might renew its cooperation with the Russian special services.

Further diplomacy in this area could do London harm politically.