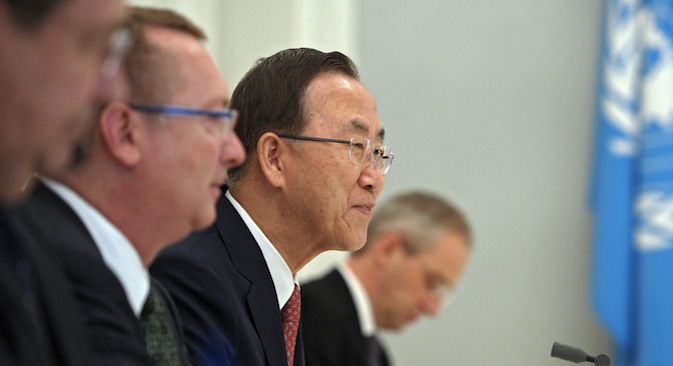 A international conference on Syria awaits to be held under the auspices of the UN. The uncertainty of who will represent Syria is holding up preparations for the forum.

Last Friday UN Secretary General Ban Ki-moon met in Sochi with Russian President Vladimir Putin and Foreign Minister Sergei Lavrov. The talks focused on a resolution to the protracted conflict in Syria, which is now more than two years old.

The situation there is dominating the global agenda, especially after the UN General Assembly's recent adoption by majority vote of a controversial resolution. In it, the National Coalition of Syrian Revolutionary and Opposition Forces recognizes the "legitimate representative" of the Syrian people.

The document's overriding criticism of the government is vehemently contested by Russia.

The negotiations between the UN Secretary General, Ban Ki-moon, and the Russian Foreign Minister, Sergei Lavrov, were held behind closed doors.

In a press conference Lavrov said: "We would prefer to see the conference convened under the auspices of the UN. This joint Russian-American proposal is supported by many countries, and the Secretary General today confirmed his support for the endeavor."

However, the conference has yet to be scheduled. "A date convenient for all participants is currently being agreed upon. We have a window in mind, but I'm not ready to give any exact dates just yet," stated Ban Ki-moon. "Expectations are high, so the meeting has to go ahead as soon as possible."

Lavrov says the uncertainty of who will represent Syria could hold up preparations for the forum. Earlier, U.S. Secretary of State, John Kerry, announced that in addition to the opposition leaders, the US would like to see at the conference President Bashar al-Assad.

For his part, Lavrov considers it appropriate to invite other interested parties, in particular Iran and Saudi Arabia.

How the conflict is resolved will largely determine the fate of Syria, the region as a whole and also the way that the international community responds to future crises, he stressed.

And he reiterated Russia's position: "We are interested in ensuring Syria's territorial integrity and sovereignty, which is endorsed by the Geneva Communiqué."

In passing, Lavrov expressed dissatisfaction with the hysteria in Western media about Russian arms sales to government forces in Syria.

"I do not understand why the media are trying to sensationalize this. We do not hide the fact that we supply weapons to Syria under signed contracts that do not violate any international agreements or Russian law," stated the minister.

Once again, Lavrov explained that Russia supplies Syria only with defensive weapons and surface-to-air missiles, such as the S-300 system. "This in no way affects the balance of power in the region or assists in the struggle against the opposition," he assured.

Ban Ki-moon's next appointment will be with Vladimir Putin. "We are very pleased to see you, Secretary General. Today, as permanent members of the Security Council, we uphold the central role of the United Nations in international affairs," underlined the Russian president.

The Secretary General expressed the hope that Russia would continue to play a leading role in resolving global issues. Three major events — the G20 summit in St. Petersburg, the Winter Olympics in Sochi, and Russia's presidency of the G8 next year — have raised expectations.

Ban Ki-moon particularly praised the inclusion in the G20 agenda of the impact of corruption on economic growth, and the fact that Russia is due to host the 2015 UN Anti-Corruption Conference.

As for the Winter Olympics in Sochi, the event should contribute to world peace, he said. In this regard, Ban Ki-moon believes that Moscow should support the General Assembly's adoption of a resolution calling for an armistice during the sporting occasion.