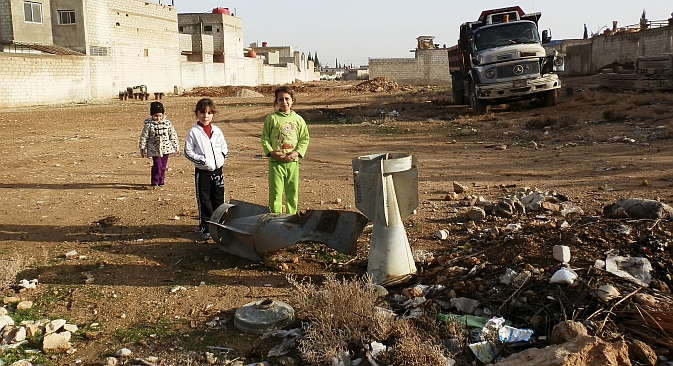 Moscow hopes that the 2013 G8 summit will contribute to tackling the Syrian standoff. Pictured: Children standing near the remnants of a bomb shell in the ground near Damascus. Source: Reuters

Vladimir Putin could well play a decisive role at the G8 summit in Northern Ireland, where Syria is the most difficult problem faced by world leaders

When David Cameron plays host to world leaders at the upcoming G8 summit in Enniskillen, Northern Ireland, one issue threatens to overshadow the prime minister’s official agenda: Syria. And Russia’s Vladimir Putin - participating in a G8 summit for the first time in six years - could well play the key role in brokering a deal to end the two-year-long civil war in the country.

Hopes are high that the G8 summit could be where a breakthrough in made toward securing peace in Syria. A clear declaration by the G8 in favor of a negotiated peace would be especially fitting in Northern Ireland, where Britain and Ireland brokered the Stormont peace deal in 1997 that saw the end of a 30-year sectarian conflict between Protestant Loyalists and the Catholic IRA.

Does Russia stand among the great nations?

Ahead of the G8 meeting on June 17-18, Russia has been at the centre of intensified efforts to resolve the Syria crisis in recent weeks. At talks this month in Moscow, Russia’s Foreign Minister, Sergei Lavrov, secured agreement from John Kerry, U.S. Secretary of State, to jointly call an international peace conference in Geneva, while Putin held detailed talks with Cameron in Sochi, the venue for the 2014 Winter Olympics, that also focused on Syria.

This diplomatic push was lent further weight by the recent visit of Ban Ki-Moon to Moscow, where the UN Secretary-General backed the joint Russian-U.S. peace plan, and Lavrov indicated that he would like to see the Geneva peace conference go ahead under UN auspices.

Ban Ki-Moon agreed, stressing: "Expectations are high, so the meeting has to go ahead as soon as possible.”

As of the time of writing, the Geneva peace conference has still not been convened, despite the high priority it is being given in Moscow, Washington and London. One of the critical factors to secure the participation of Assad’s government and the Syrian opposition could well be securing unanimous G8 backing for the Geneva conference.

According to diplomatic sources in Moscow, Russia will be pushing hard for the G8 to include this point in the leaders’ final communiqué.

Speaking of the forthcoming Northern Ireland summit, Lavrov has stressed the importance of the G8 presenting a united front - to convince all parties involved in the conflict of the international community’s determination to end the Syrian nightmare.

“It’s important for the participants to voice clear support for the Russian-American initiative on carrying out the Geneva Communiqué,” Lavrov said.

Throughout the armed conflict between Syria’s diverse opposition groups (now ranging from Jihadist militants to forces backed by various Arab countries) and President Bashar Assad’s regime, Russia (along with China) has sought to mediate a solution and resisted foreign interference in the country, and has blocked through the UN Security Council any attempts at imposing an outside military solution.

Foreign military intervention, Moscow believes, would considerably worsen the situation in Syria - and could lead to a chaotic situation that would encourage the spread of Jihadist terrorism in the wider region.

Putin personally has consistently opposed international interference in third countries’ affairs – ever since 2003, when U.S. President George W. Bush started the war in Iraq on the pretext of searching for weapons of mass destruction.

Russia also argues that its legitimate strategic interests - securing its energy exports to the Mediterranean - are best served by maintaining a small naval base in the Syrian port of Tartus.

According to an RBTH source in the Kremlin, Moscow is particularly keen to resolve the Syrian crisis now, as Russia will host a G20 summit in St. Petersburg in September, and next year assumes the rotating chairmanship of the G8.

Encouragingly, the differences between Russia’s position and that of the West have been closing in recent weeks - with a recognition by both sides that the need to secure a peaceful transition in Syria (as Moscow argues, with the participation of President Assad) is growing and pressing.

The visits to Russia by David Cameron, John Kerry and Ban Ki-Moon, and now the decision by President Putin to attend the G8 summit - which was up in the air in recent months (particularly due to cooler relations over the past year between Washington and Moscow) all bode well for a major breakthrough - and finally to bring the warring sides in Syria to the negotiating table.

Fyodor Lukyanov, editor of the influential Russia in Global Affairs magazine, says that Russia is convinced that G8 solidarity is required to convince Saudi Arabia, Qatar, and Turkey to stop meddling in the Syrian conflict. Lavrov has stressed the importance of including Iran and Saudi Arabia, the Middle East region’s most influential powers, in the Geneva confefence.

While the UK has declared global economic issues to be the main theme for its G8 chairmanship, with Prime Minister David Cameron authoring an article on the subject in The Wall Street Journal, Russian officials have pointed out, however, that behind-the-scenes discussions on Syria are likely to dominate in Northern Ireland, rather than the official agenda.

“G8 summits have for a long time been grand high-society events,” says Lukyanov, widely considered a close confidant of Kremlin officials. “The important things are not what’s officially announced, but what is really being discussed, especially at bilateral meetings.”