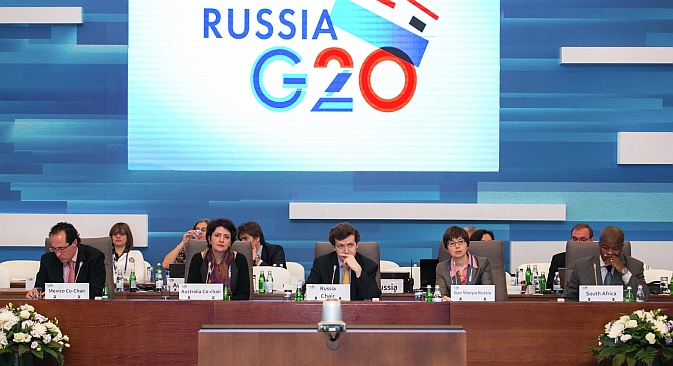 The G20 summit offers Russia both challenges and opportunities. Pictured: Participants of a briefing at the Conference on the Russian Presidency in G20 "Fostering Economic Growth and Sustainability" held on Feb. 28. Source: G20 / Press Service

Moscow is being urged to press ahead with a forward-looking agenda during the remaining months of its G20 presidency.

In the run-up to the next summit of the G20 that its current president, Russia, will host in St. Petersburg in September, the Center on Global Interests, a Washington D.C.-based think tank, has presented an interim assessment report outlining the main issues on the G20 agenda and setting out recommendations as to how Russia might make best use of its presidency.

In their report “Russia’s turn to steer the G20” the authors, Mark Medish and Daniel Lucich, highlighted some of the key issues that are being discussed through the preparatory phase leading to the St. Petersburg summit and that should stay in its focus. These include a governance reform of the International Monetary Fund, which suggests increasing the voting power of emerging markets by shifting quotas from overrepresented countries to underrepresented ones.

Another major challenge facing the G20 economies is about developing a debt management strategy and striking a balance between the need for fiscal austerity and the merits of fiscal stimulus. The G20 will also need to discuss diversification of global reserve currencies, facilitation of access to long-term financing for large-scale infrastructure projects, and coordination of efforts to address financial crises such as Cyprus.

However, the authors of the report expressed a concern that there are “no concrete objectives, no plan for what the legacy of the St. Petersburg Summit should or will be.”

Presenting the report at Moscow’s Higher School of Economics on May 23, Lucich said: “There are very low expectations of what the G20 can do,” adding that the legitimacy and efficacy of the G20 have been called into question.

“The group may be too diffuse and varied to agree on much because the highest common denominator of interests is too low for meaningful action except in the context of global crisis,” the report says.

It remains to be seen whether Russia can take the lead in forging ahead with the pressing issues on the G20 agenda. Russia, “in many ways a new country looking for its place in the international arena,” is going through a national identity crisis and leaning toward isolationism, Lucich and Medish say.

“In Moscow, there is a near-paranoid concern that the U.S. or the West “wants Russia to fail”,” the authors of the report pointed out, reminding that the Kremlin has blamed mounting public discontent with the government in Russia on alleged Western interference in Russia’s internal affairs. Last May President Vladimir Putin skipped the G8 Summit at Camp David “without much explanation,” the authors noted.

“A big risk for Russia is that its current direction toward increasing national autarchy and regional isolation could be seriously overestimating the country’s internal capacities to grow and flourish,” the report says.

Some of the international experts and investors are wary of optimism about Russia’s growth prospects often expressed by high-profile Russian politicians. Demographic decline, environmental degradation, failure to diversify away from oil and gas, lack of innovation in the economy, rampant corruption, court system susceptible to extra-judicial influence, and a weak banking system are listed among the country’s pervasive problems.

Lucich and Medish conclude that Russia’s stint as the president of the G20 is both a test and an opportunity. They recommend that Russia should “focus on issues where it has the power of initiative” and call for much more comprehensive attention to the global commons including climate, food security, and trade.

“Russia’s historic ratification in 2004 allowed the Kyoto Protocol to come into force, and it would be fitting for Russia now to bring the climate issue back into focus at the G20,” the report says.

The world’s third biggest emitter of CO2 after China and the U.S., Russia could take advantage of its substantial renewable energy potential in geothermal, hydro, solar and wind power, and significantly reduce greenhouse gas emissions at comparatively low cost.

A leading grain exporter, Russia is recommended to advance the issue of food security through G20 discussion panels. Russia also is urged to decide whether to use its newly gained WTO status to push toward multilateral agreements or to continue to pursue regional solutions, like the Customs Union of Belarus, Kazakhstan and Russia.

Former head of the Russian Central Bank, Sergei Dubinin, who reviewed the report, expects no groundbreaking decisions to be made at the summit in St. Petersburg. “The very opportunity for a dialogue is a big step in a positive direction,” he said.

A leading economist, Sergei Alexashenko, was blunter. “If President Obama doesn’t show up, or if any of the G20 leaders refuse to turn up for a photo call, or if a scandal of some sort break out, the summit will be a failure. In all other cases the summit should be considered successful,” he said ironically.

The President of the Center on Global Interests, Nikolai Zlobin, pointed out that governments are searching for a new international organization to replace the UN, which has proved incapable of addressing the most critical challenges of the present day.

“This search can take dozens of years, and I welcome every attempt to create an organization of that kind,” he said. “If there is no need for the G20, it will disintegrate.”