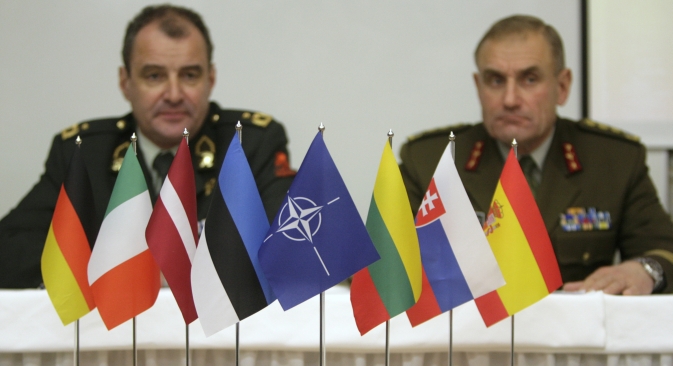 NATO experts have come up with a first-ever guide that seeks to adjust international law on the subject of cyberwars. Russia believes the very appearance of the document is potentially dangerous.

The 300-page document recently published by the Cooperative Cyber Defense Center for Excellence (NATO CCD COE) has prompted a reaction from several Russian agencies, from the Foreign and Defense ministries to the Security Council and the special services.

The document is called the “Tallinn Manual of Cyber Warfare” for a reason. The CCD COE was opened in the Estonian capital in 2008, one year after the Bronze Soldier affair and massive hacker attacks on Estonian websites. Estonia declared itself to be the first victim of an interstate cyber conflict and accused Russia as the aggressor, though proof of Moscow’s involvement has yet to be provided.

The Tallinn Manual describes, for the first time, what actions states and military alliances should take in the event of larger-scale attacks. It argues that the existing international legal rules (notably, international humanitarian law) are applicable to cyberspace. Thus, no new laws are needed, contrary to the position taken by Russia and some other states.

The Manual describes such attacks as “unlawful” if carried out in the absence of military actions. The victim state can respond to such an attack either by bringing the aggressor to account or by resorting to “commensurate counter measures.”

The authors stress that, depending on the scale and nature of the consequences (loss of life, damage or destruction of facilities), an attack in peacetime may be equated to “use of force” or an “armed attack,” entitling the victim state to defend itself, including through the use of traditional weapons.

The Manual’s biggest section is devoted to cyberattacks that accompany traditional armed conflicts. The authors believe such attacks are covered by all the provisions of humanitarian law, including the qualification of the participants and organizers of computer sabotage as combatants who may be taken prisoner or eliminated.

The Tallinn Manual met with a highly positive reaction in the West, with many American experts noting that its key ideas reflect Washington’s view that no new laws need to be created for cyberspace.

The Russian authorities — especially the military — have taken a very guarded view of the Tallinn Manual. Moscow thinks its publication marks a step toward legitimizing the concept of cyberwars.

Russian Defense Ministry spokesperson Konstantin Peschanenko came out with a statement to this effect in April. He was backed by Russia’s Roving Ambassador, Andrei Krutskikh, who said that, while Russia is trying to prevent militarization of cyberspace by urging the international community to adopt a code of conduct in this sphere, the United States and its allies are already agreeing the rules for prosecuting cyber warfare.

Some Russian experts, though, see some pluses in the publication of the Tallinn Manual. Alexander Bedritsky of the Russian Institute for Strategic Studies points out that Moscow’s calls for a broad international discussion of the issues connected with the struggle between states in cyberspace were, for a long time, rejected by Washington. “The situation is beginning to change,” the expert noted.

Bedritsky does not believe the sides are likely to come to an agreement any time soon.

“If Russia and its allies see their mission as to prevent  interstate cyber conflicts and put these phenomena beyond the pale of acceptable international actions, the Tallinn Manual seems to answer the question: ‘What should be done if thunder strikes?’” he said. “These approaches can be mutually complementary.”

In the expert’s opinion, the Tallinn Manual, not being backed up by any international rules restraining states from launching cyberwars, may contribute to legitimization of cyber conflicts, “making them part of the system of international relations in the 21st century, as a permissible means for pursuing foreign policy goals and ensuring national interests.”

“There needs to be a balance in the shape of the international legal restrictions on which Russia insists,” said Demidov.

Even so, although the positions of Russia and the U.S. (along with NATO) on the legal aspects are wide apart, there are signs that the gulf is narrowing in practical terms. According to Kommersant-Vlast, a number of intergovernmental agreements on confidence measures in cyberspace are to be signed during the June meeting between President Putin and President Obama.

The artice is first published in Russian in Kommersant Daily.