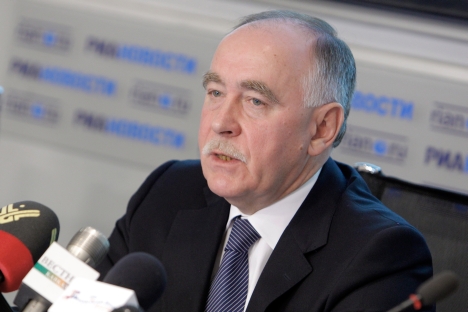 The recent anti-drug summit — the eighth since the “reset” proclaimed by the Obama administration — has confirmed that Moscow and Washington are on track to step up cooperation on combating drug trafficking.

Last week the heads of the Russian and U.S. drug control agencies — Viktor Ivanov and Gil Kerlikowske, respectively — signed a memorandum on cooperation, bringing an end to the eighth meeting of the drug trafficking working group of the Russian-American bilateral presidential commission in Sochi, Russia.

“The group has been working smoothly and persistently in a number of areas,” head of the Federal Drug Control Service of Russia, Viktor Ivanov, said. “We have also been trying to expand the geography of our meetings. Holding this meeting in Sochi was a deliberate and symbolical move, since Sochi will be hosting the next Winter Olympics, this creating a warm environment for our meeting.”

Ivanov also added that the previous period of 2010-2012 was very rich in enforcement events, “resulting in cocaine shipments from Latin America being prevented and major cocaine smuggling routes to Russia being cut off, owing to concerted action.”

Authorized journalists at the meeting were able to see materials about a large-scale joint operation dubbed “Boxwood,” which was held in Afghanistan on May 22-23.

Afghanistan drug enforcers, supported with equipment and information from the Federal Drug Control Service of Russia and the U.S. Drug Enforcement Agency, eradicated seven clandestine drug laboratories in the Badakhshan province of Afghanistan, destroying lab equipment and seizing several kilograms of ready-to-use heroin in a surprise operation involving a helicopter detachment and 70 policemen.

Such operations have been made possible by the close cooperation between the respective anti-drug agencies of Russia and the U.S. — cooperation that has now lasted for four years since the “reset” policy was proclaimed by the U.S. administration.

Since then, all the agencies involved have met at seven summits held in various locations: Washington, Moscow, Chicago, Boston and St. Petersburg. The eighth meeting, in Sochi, was intended to sum up the interim results of the cooperation.

Apart from representatives of the Federal Drug Control Service of Russia and the United States Office of National Drug Control Policy, the meeting was also attended by delegates from the Russian Foreign Ministry and the U.S. Department of State, ministries and agencies responsible for law enforcement and state borders, the U.S. Department of Health and Human Services and the National Security Council.

According to Ivanov, he had a separate discussion with Kerlikowske about the Mexican Sinaloa drug cartel. Recently, Russian and U.S. anti-drug trafficking agencies, supported by Nicaraguan police, carried out a successful operation against the cartel; but much still remains to be done.

“It is important that we keep exchanging information,” said Ivanov. According to the official, the problem of illicit drug trafficking from Latin America is currently very urgent in Russia.

On Friday, May 31, the summit participants visited the Sochi Without Drugs Rehabilitation Center in the village of Uch-Dere.

The agenda of the Sochi meeting will remain at the focus of the 30th International Drug Enforcement Conference (IDEC), which is scheduled to take place in Moscow on June 5-7. The conference is expected to be attended by policemen from 124 countries, as well as representatives of 11 international organizations.

Based on materials from Rossiyskaya Gazeta and ITAR-TASS