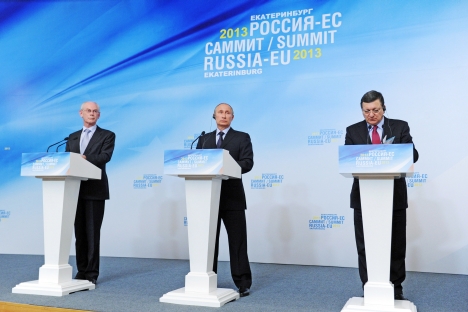 Meanwhile, the visa issue remains bogged down in details.

The Russia-EU summit held in Yekaterinburg has shown that the two sides are ready to coordinate their actions in preparing an international conference on Syria, in spite of differences over ways to settle the crisis. However, Moscow and Brussels are still bogged down in details on bilateral issues — most notably, the scrapping of visas.

President Putin again expressed disappointment with the European Union’s decision to lift the embargo on arms supplies to Syria. Speaking at a news conference after the Russia-EU summit, he said Russia had reiterated during the talks that, “any attempts to influence the situation by force through direct military interference are doomed to failure and would inevitably entail dire humanitarian consequences.”

At the same time, the president stressed that the agreement between Russia and Syria on the supply of S-300 air defense systems had not yet been implemented. Last week, the media reported that Russia had allegedly delivered the first batch of S-300 air defense missiles to Syria under contracts signed with the Syrian leadership before the start of the conflict.

Putin added that Russia and the EU had agreed to coordinate their actions more closely, in order to promote the new Geneva-2 international conference on Syria, which is being initiated jointly by Russia and the United States.

European Council President Herman Van Rompuy, for his part, confirmed that the EU would back the initiative to hold a conference on Syria and would work to preserve the country’s integrity and assert democratic government there.

Van Rompuy said what was happening in Syria was a veritable humanitarian disaster. According to him, although the second round of consultations in Geneva would hopefully lead to serious shifts, all the available channels should be used to send a signal to both sides in the conflict and ensure free access for humanitarian aid.

The European Council president added that many members have decided not to supply arms to the Syrian opposition for now, in order to give the negotiating process a real chance of progress and success.

Visa issue bogged down in details

Scrapping the visa regime is another issue that calls for a coordinated approach between Russia and EU countries. Even before the official part of the event began, European Commission President José Manuel Barroso declared that an agreement on a simplified visa regime between Russia and the EU may soon be signed, with only the technical details remaining to be arranged.

During a working meeting of Russia-EU summit participants, Barroso noted that the two sides had made considerable progress on the visa issue. He noted that the technicalities preventing the agreement from being signed at once have to do, among other things, with the disclosure of personal information about passengers. “I hope that the Russian authorities will be able to address the present concerns,” the European Commission president said.

He also noted the importance of the framework agreement between Russia and the EU. Both Moscow and Brussels would like to see an early conclusion to that process. The previous agreement was signed 20 years ago and is outdated. The head of the European Commission said that a new agreement would lay down the correct guidelines for the development of relations.

Russia’s permanent representative to the EU, Vladimir Chizhov, told journalists after the summit that the official round of talks on a new framework agreement between Russia and the European Union would be resumed in the second half of the year.

Fyodor Lukyanov, head of the Council on Foreign and Defense Policy, said the statement made by European Commission head José Manuel Barroso — to the effect that a treaty on easing the visa regime with Russia could be signed shortly — “is totally non-committal.”

“This is by no means the first time Barroso has said that a treaty is about to be signed,” Lukyanov said.

Yelena Suponina, head of the Center for Asia and the Middle East at the Russian Institute for Strategic Studies said: “Today, more than ever before, all the international mediators are interested in bringing about a peaceful settlement in Syria.”

“Differences remain, which means that the chances of a peaceful settlement are as yet slim,” Suponina continued. “But, in the three years since the Syrian conflict began, I do not remember a single instance when all the parties — the Russians, the Americans and even the Europeans — were so close to realizing that a continued civil war in Syria is fraught with catastrophic consequences, not only for the country, but for the whole region.”

In her opinion, Europe — especially France and the UK — is jealous of the fact that the Russians and the Americans seem to be moving toward an agreement on Syria.

“The meeting between the Russian leadership and the EU leaders was very important for involving Europeans in these efforts and reassuring them,” said Suponina.

The article is first published in Russian in RIA Novosti.