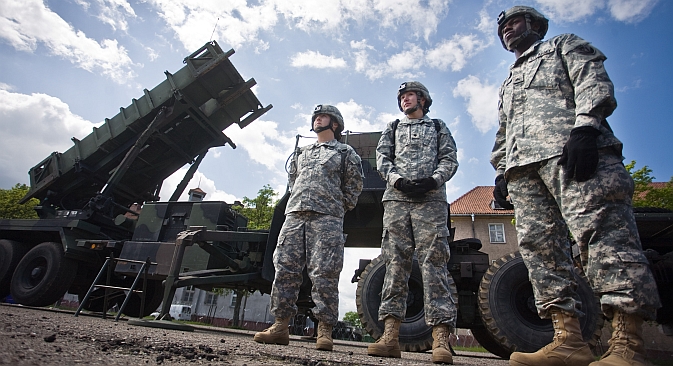 U.S. soldiers stand on May 26, 2010 in front of a Patriot missile battery at an army base in the northern Polish town of Morag. Source: AFP / East News

The leading Russian and Western experts evaluate the chances that Obama and Putin will compromise on ABM.

At the upcoming G8 summit in Northern Ireland, Russian President Vladimir Putin and his American counterpart Barack Obama are expected to discuss one of the thorniest issues in U.S.-Russian relations: the U.S. missile defense shield in Europe.

Although Obama signaled that Washington is ready to compromise on its European missile defense, Moscow is taking the offer with a grain of salt.

In a letter to his Russian counterpart, the U.S. president outlined some proposals he would like to negotiate. In particular, Washington suggested that Russian specialists could visit its missile defense control facilities.

However, during his recent trip to the United States, Russia’s Security Council Secretary Nikolai Patrushev made it clear that the Obama administration’s initiative won’t suffice.

“We value the will to ensure transparency of missile defense programs. At the same time, we think political statements claiming the absence of an intent to undermine the strategic deterrence potential of the other side are inefficient," Patrushev said.

“Cosmetic adjustments, like the refusal to create a new interceptor, cannot alleviate our concerns over the influence the missile defense shield will have on strategic stability," he added.

Likewise, in his message to Obama Russian President Vladimir Putin implied that negotiations on the issue would be tough.

Russia Direct asked the leading Russian and American experts to evaluate the extent to which Moscow’s fears are justified, and whether the two countries are likely to find a compromise at the upcoming G8 summit.

Russia’s reservations about the U.S. missile defense shield in Europe are speculative: Nobody can imagine a nuclear war between Russia and the United States. Nevertheless, if Washington keeps working on this project, a hypothetical threat to Russia’s security does exist, and Moscow takes that into account.

That is why in response, Russia is modernizing its nuclear arsenal. Russia seeks a new treaty on ABM because back in 2001, Washington left the previous one [the 1972 Anti-Ballistic Missile Treaty (ABMT) intended to reduce the number of anti-ballistic missile systems].

The initiative proposed by the Obama administration is an attempt to make the ABM project more transparent. But had the U.S. president offered this idea two years ago, when Moscow was more flexible, the Kremlin may have approached the proposal differently.

The fact that Obama is trying to reach a compromise on the ABM issue should be viewed as a positive sign, even though it’s not enough. The initiative that came from the American president signifies that the two countries can potentially reach a consensus at the G8 summit.

Nuclear war between the United States and Russia is now unimaginable. Neither side should worry about the marginal capability of the other in terms of missile defense.  Technically speaking, any midcourse interceptor system should be easy for Russia to defeat with countermeasures – though again, I would hope that Moscow wouldn't see the need to bother. One more reason for reassurance is the fact that the U.S. deployment is very modest in scale.

The Russians contend that increased numbers of more capable missile defenses could undermine the U.S.-Russian strategic offensive balance. That is a fair point. But now, the Russian objections are simply not justified by the facts.

The new START Treaty limits the United States and Russia to 1550 deployed strategic warheads each. U.S. missile interceptors to be deployed in Europe will only be capable of engaging intermediate-range ballistic missile warheads, but both Russia and the United States are banned from having such missiles.

In 2017, the United States will have at most 44 U.S.-based interceptors capable of engaging strategic ballistic missile warheads; Russia currently has 68 interceptors in the Moscow anti-ballistic missile system. The gap between offense and defense is huge – so large that a missile defense treaty is no longer necessary.

These steps could pave the way for a cooperative NATO-Russia missile defense arrangement, on many points of which U.S. and Russian thinking converge.

To a certain extent, the U.S. ABM might pose a threat to Russia, for example when it comes to anti-ballistic missile defenses deployed on a naval vessel in the Norwegian Sea. After all, American anti-missiles may intercept Russian missiles if they are deployed somewhere at sea.

At the same time, I don’t see any danger posed by the ground-based ABMs.

The second problem that concerns Russia is the initial purpose of the U.S. ABM. The United States sees its ABM as serving many functions, including as a guarantee in case of a hypothetical (and unlikely) war with Russia. It can be described as military insurance. And this insurance irritates Russia.

I think Russia and the United States lack the political will to achieve a compromise in this area, and Russia can be partly blamed for its lack of flexibility. Russia doesn’t see new approaches, but instead tries to look for old problems. Moscow requires legal guarantees, but in the current geopolitical situation, this is impossible to achieve and looks unacceptable to the West. We want to make the United States follow a policy it cannot follow, and this irritates the West.

Russia's objections to plans for a U.S. missile shield in Europe are almost completely unjustified. While accusing Washington of seeking the capability to deliver a nuclear first strike against Russia, Moscow has in the past threatened to quit the new START Treaty and aim nuclear missiles at Europe.

Never mind the fact that the ranges of American missile interceptors would be too short to threaten Russia's intercontinental ballistic missiles, and therefore pose no threat to Moscow’s nuclear deterrence. No knowledgeable observer takes such claims seriously. Moreover, were the United States to attack Russia, Moscow's early warning radar would give it plenty of time to deploy nuclear warheads for a counterstrike, a deterrent no missile shield could affect.

Russian officials have stuck to the view that America's missile shield plans are evidence of its drive to attain global military supremacy. Whatever the truth in that and whatever the logic of the missile shield itself, Russia has made its objections for another reason: to pick a fight with the United States for the sake of posturing on the world stage.

Differences over missile defense affect many aspects of U.S.-Russian relations, if only by sowing general distrust. Given president Putin's penchant for anti-Americanism, I don't believe there are prospects for real, mutually beneficial collaboration in the foreseeable future.

The main threat stemming from the U.S. missile defense is that of setting a precedent. Russia cannot afford to let the United States set up missile defenses so close to its borders, because the robustness of the deployment will grow over time and constitute a real threat.