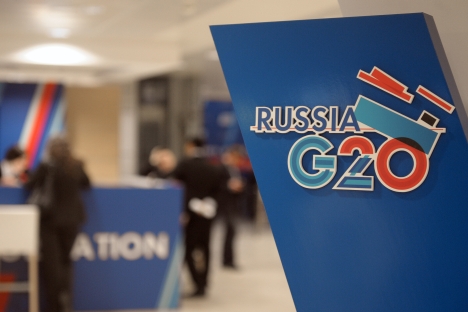 Tax evasion and corruption will be the key issues at the upcoming G20 summit in St. Petersburg. Source: RIA Novosti / Grygory Sysoev

Data exchange between tax authorities and the fight against offshore tax havens will be the key topics for discussion at the St. Petersburg G20 Summit in September 2013. This will be the first time fiscal matters have appeared on the G20 agenda.

The Russian G20 Sherpa and head of the Russian Presidential Experts’ Directorate, Ksenia Yudaeva, told a June 10 news conference called to review the results of the first six months of Russia’s G20 Presidency that leaders of 19 nations and the European Union were planning to discuss two initiatives in the tax sphere.

The Organization for Economic Cooperation and Development (OECD) will present its proposals on an automatic information exchange between fiscal authorities, and a meeting of G20 finance ministers will issue a report on a joint policy to prevent tax evasion and the transfer of profits by legal methods through offshore zones.

“Recently, there have been a number of tax evasion scandals in several countries – especially in Europe – involving leading businessmen, politicians and companies. Many leaders are calling on the G20 to discuss it separately – perhaps even in a separate session – and adopt certain decisions in this area,” said Yudaeva.

When asked what other matters the St. Petersburg summit would be discussing, the Russian Sherpa said: “We also need to address corruption.”

Yudaeva recalled that, last year, the G20 adopted a two-year action plan in this rather sensitive area.

“This year, we are preparing a report on the implementation of its various activities. Then we will present reports and some additional suggestions on the initiatives proposed by Russia. We have put forward initiatives on fighting corruption at major sports events and during the privatization process,” the Russian Sherpa said.

According to Russian Deputy Minister of Finance Sergei Storchak, besides the work on the agenda for September’s G20 Summit, the stage has been set for G20 activities in 2014, when Australia will take over the G20 Presidency. He believes the St. Petersburg summit will help resolve the problem of investment financing without resorting to banks, to avoid a repetition of the 2008 crisis.

“In the last few decades, banks have been the main source of monetary and financial resources for project financing in all sectors of the economy,” Storchak said.

According to him, the financial sector had lost touch with reality and started to dominate all by itself. The official added that this notion was currently highly relevant for the G20.

“We agreed that we would reach a deadlock if we continued to rely exclusively on bank finance,” the deputy minister said, recalling that Russia had declared an active search for alternative sources of investment financing a key goal of its G20 Presidency.

In addition, the G20 leaders should draw a line through discussions about supporting private banks through national budgets.

“The ‘too big to fail’ problem will be resolved once and for all at the St. Petersburg summit. From now on, nobody will spend national budgets to save private financial institutions that have lent to unreliable borrowers, accumulated toxic assets and then asked the governments to give them astronomical financial assistance funds,” Storchak said.

Shortly after the meeting of deputy finance ministers, a two-day Civil 20 Summit opened in Moscow on June 13, as part of Russia’s G20 Presidency. According to Yudaeva, Russia is the first country holding a G20 Presidency to have hosted such a forum.

More than 350 people from the G20 countries took part, including representatives of civil society, international organizations, businesses, media and government. 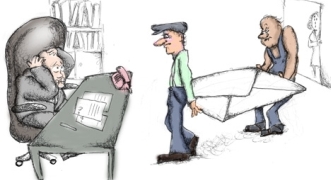 The Civil 20 Summit is the closing event of the civil track. The Civil 20 was founded in December 2012. It consists of seven working groups developing recommendations in areas such as environmental sustainability and energy, anti-corruption, global financial architecture, jobs and employment, financial inclusion and financial education, and food security. The Civil 20’s recommendations could lead to substantial changes to the final communiqué of the G20 leaders.

All of these are part of the so-called outreach dialogue – i.e., additional G20 formats. Naturally, they are developing their own recommendations for the G20 Summit, which is expected to bring positive changes to the global economy.