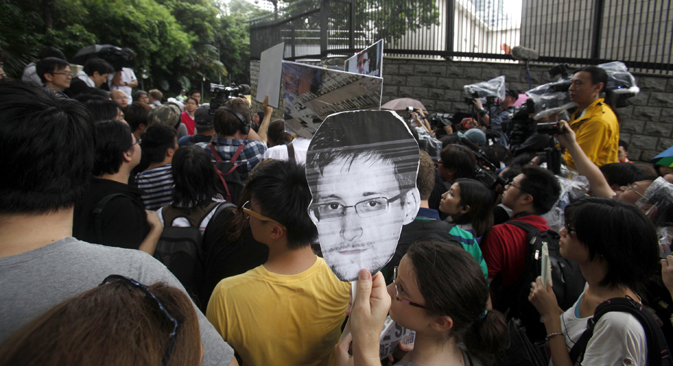 The supporters of National Security Agency leaker Edward Snowden during a demonstration outside the U.S. consulate in Hong Kong on June 15. Source: Reuters

The president of Russia said that Snowden would have to find another country to reside if he plans on continuing his work “damaging” the U.S.

Former CIA employee and NSA contractor Edward Snowden may be allowed to stay in Russia, but only if he stops leaking information damaging to the United States, according to Russian President Vladimir Putin.

"If he wants to stay here, there is one condition: He has to stop his work aimed at damaging our U.S. partners, no matter how strange this sounds coming from me," Putin said at a news conference in Moscow on Monday.

At the same time, he has expressed the suspicion that U.S. intelligence services have been bugging Russian diplomatic missions in the United States.

"It's none of our business that allies are bugging each other. Let them do what they want," Putin said when asked to comment on allegations that the United States has bugged European embassies.

"That is information from Mr. Snowden, as far as I can see. There's nothing in that information about any attempts to bug Russian official missions. But I can't exclude such a possibility, and we did possess evidence of that a while ago. I wouldn't like to go into it now. It's a matter for professional assessment," he said.

"He is a free man in this regard. Russia never extradites anyone anywhere and is not going to extradite anyone. No one ever extradites anyone to us, you probably know this well, too. At best, we have exchanged those detained, arrested and sentenced by court in Russia. For our intelligence employees."

Meanwhile, Venezuelan President Nicolas Maduro expressed his readiness to allow Snowden into his country, according to Venezuelan media outlets.

Snowden fled to Hong Kong in May and leaked information about the NSA’s highly classified surveillance operations on the Internet. The leaks suggested that U.S. intelligence services swept up vast amounts of both telephone and Internet communications around the world.

Snowden flew to Moscow from Hong Kong where he reportedly remains in Sheremetyevo airport's transit area to this day. The United States has urged Russia to extradite Snowden.

“By virtue of the fact that he [Snowden] feels like a human rights activist and campaigner for human rights, he, judging by everything, does not intend to stop such work, so he has to choose a country and move there. When this will happen, I do not know, unfortunately," the Russian president said. Snowden “doesn’t [see himself as] a former employee of special services, he feels like a fighter for human rights, a dissident something like Sakharov, well, probably, of a different scale," Putin said.

"You know our human rights organizations said they were opposed to extraditing him to the country where death penalty is possible. But all this is a separate topic,” the president added.

The story is based on Interfax materials.