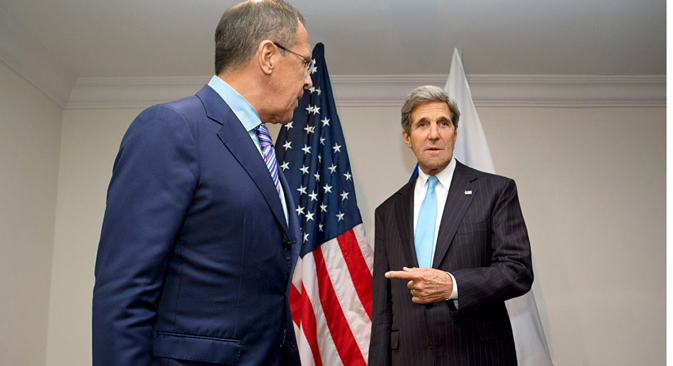 U.S. Secretary of State John Kerry gestures toward Russian Foreign Minister Sergey Lavrov (L), as he deflects a question from a reporter about whether they will discuss asylum for NSA leaker Edward Snowden, at the ASEAN summit in Brunei. Source: AP

Moscow and Washington prove unable to agree on key issues.

The talks in Brunei between Russian Foreign Minister Sergei Lavrov and U.S. Secretary of State John Kerry have clarified the key problems in U.S.-Russian relations.

Moscow and Washington appear resigned to the failure of the initiative to hold an international conference on Syria — the so-called Geneva-2. In addition, Russian authorities have rejected President Obama’s recent proposal for drastic bilateral cuts in nuclear arsenals.

The seventh meeting between Sergei Lavrov and John Kerry since February (when the latter became U.S. secretary of state) was largely devoted to Syria, as indeed were all the other meetings.

Yet, while the two countries’ top diplomats had previously expressed optimism regarding the chances of a diplomatic solution to the Syrian conflict, the mood has now changed.

The reason lies in problems that cropped up during preparations for the proposed international conference on Syria: The date and composition of Geneva-2 failed to be agreed upon.

Talking to journalists on the fringes of the East Asian foreign ministers’ summit in Brunei, and following his meeting with Kerry, Lavrov stated that the U.S. was continuing its attempts to “achieve a consolidation of the Syrian opposition on the platform of the Geneva communiqué.”

However, a source close to the Russian delegation said, “The U.S. is simply keeping the idea afloat but, in reality, is not going to hold the conference.”

“Proof of this is Washington’s decision to start supplying arms to the Syrian rebels,” the source said. Another participant in the talks — Saudi Arabia — also opposed Geneva-2, the source added. “A diplomatic game is under way over who will be the first to announce that the initiative has failed.”

The scandal around former CIA agent Edward Snowden was expected to be the second topic of discussion between Lavrov and Kerry.

It was the main topic for U.S. journalists: One of them spent the whole morning posing as a tourist, trying to waylay Lavrov at the entrance to the hotel and asking, without success, about the former CIA analyst.

Later, at the very start of the talks, a Washington Postjournalist asked if Russia would grant political asylum to Edward Snowden.

“Don’t shout at me,” the Russian minister shot back in English. After the talks, Lavrov said that he had not discussed Snowden with Kerry. “Our president has said it all. They [the Americans] understand it,” the minister said.

A recent addition to the list of differences concerns Barack Obama’s initiative to raise the level of trust between the U.S. and Russia by drastically cutting the two countries’ nuclear arsenals.

Russian analysts differ on the future of Syria

Earlier, Deputy Foreign Minister Sergei Ryabkov said that Moscow would study Washington’s proposal. By the time of the Brunei meeting, however, Russia seemed to have made up its mind.

“In parallel, the U.S. is developing other types of weapons, refusing to ratify the Comprehensive Nuclear-Test-Ban Treaty and considering placing weapons in space,” the source said, by way of explanation.