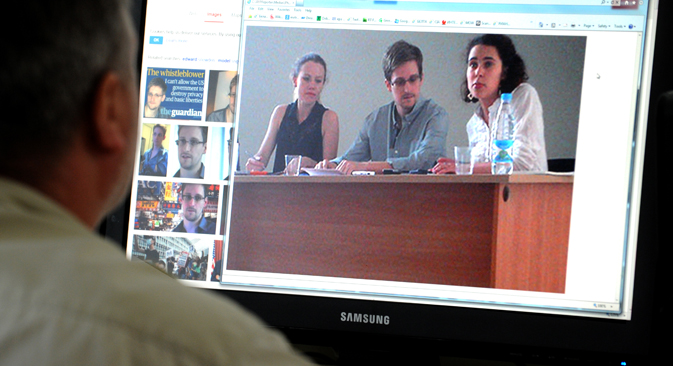 Snowden met with the human rights activists behind the closed doors of a “staff only” room at Terminal E of Sheremetyevo.Source: AFP / East News

Edward Snowden met with Russian human rights activists and lawyers at Moscow’s Sheremetyevo airport to ask for support in his asylum plea in Russia.

A group of Russian human rights activists and lawyers were the first to receive tangible proof that former CIA employee and NSA whistleblower Edward Snowden is in fact still located at the Sheremetyevo airport in Moscow, three weeks after he was said to have arrived in the Russian capital from Hong Kong and checked into capsule hotel in the transit zone of the airport.

At 12 p.m. Moscow time on July 12 Snowden sent out an open letter inviting “the Human Rights organizations and other respected individuals addressed to join me on 12 July at 5:00 at Sheremetyevo Airport in Moscow for a brief statement and discussion regarding the next steps forward in my situation.”

The statement anticipated a conference during which Snowden asked the convened organizations and individuals to support his plea for political asylum in Russia.

At 5 p.m. Snowden met with the human rights activists behind the closed doors of a “staff only” room at Terminal E of Sheremetyevo. The meeting lasted about 40 minutes. Snowden spoke via interpreter; he displayed a very confident manner, according to those in attendance.

His statement was later published in full by Wikileaks.

“A little over one month ago, I had family, a home in paradise, and I lived in great comfort. I also had the capability without any warrant to search for, seize, and read your communications. Anyone’s communications at any time. That is the power to change people’s fates,” Snowden reportedly said referring to his job as an NSA contractor.

After thanking those countries that have responded positively to his requests for support and political asylum, Snowden attacked the “outside the law” behavior of some Western European and North American states that are interfering with his “right to enjoy” the asylum granted to him by Venezuelan president Nicolas Maduro.

“I ask for your assistance in requesting guarantees of safe passage from the relevant nations in securing my travel to Latin America, as well as requesting asylum in Russia until such time as these states accede to law and my legal travel is permitted.”

After the meeting tens of journalists swarmed across the premises to collect the impressions of those present at the meeting.

Russian Human Rights Commissioner Vladimir Lukin believes that while former CIA employee needs protection, it would be better if an international organization assigned refugee status to him.

"I, as a human rights defender, believe that Snowden should obtain some status, either international or Russian," Lukin told Interfax following the meeting.

However, Lukin observed state interests are also at play and Russian-U.S. relations could be harmed if Russia grants asylum to Snowden.

"The best option, about which I spoke with Snowden, is for him to ask international organizations, like a UN or a Red Cross agency, to provide him with a temporary passport," he said.

The head of the Moscow Chamber of Attorneys Genry Reznik stressed that Snowden appears to have fully understood the conditions set by Russian President Vladimir Putin - that in order for him to receive asylum in Russia, he should stop harming U.S by leaking secrets.

“He said that everything he wanted to do has been done, and he no longer intends to act to the detriment of the U.S.” said Reznik.

Reznik added that Snowden is aware that granting him political asylum will affect the relations between Russia and the U.S.

“Snowden displayed some very good understanding of the situation,” Reznik said. “The U.S. is unlikely to allow him to fly to any other country.”

Reznik believes that Snowden’s request should be satisfied: “Article 63 of the Constitution, as also legislated by all other civilized countries, allows for granting political asylum to a person persecuted on political grounds by the government of the country he or she is a citizen of.”

Snowden hopes asylum in Russia will give him freedom of movement

According to Reznik, Snowden said that continuing to follow his job instructions would have meant breaking the U.S. Constitution. “We have different attitudes as to whether this law and pertinent court decisions should be observed and applied,” he said. “At the same time, the breach that the U.S. government has identified as such did take place.”

"This may happen within two or three weeks," he said on the Rossiya 24 television channel.

Snowden's request will have to be filed with the Federal Migration Service and then will be referred to the Kremlin Citizenship Commission. "If the decision is positive, the president will sign the relevant decree," he said.

According to reports, Snowden had previously applied for Russian asylum on July 1 and subsequently retracted his plea following Putin’s demand he stopped the leaks in exchange for refugee status.

At the time of publication, no confirmation by Russian official was available as to whether a formal asylum request had yet been filed by Snowden.