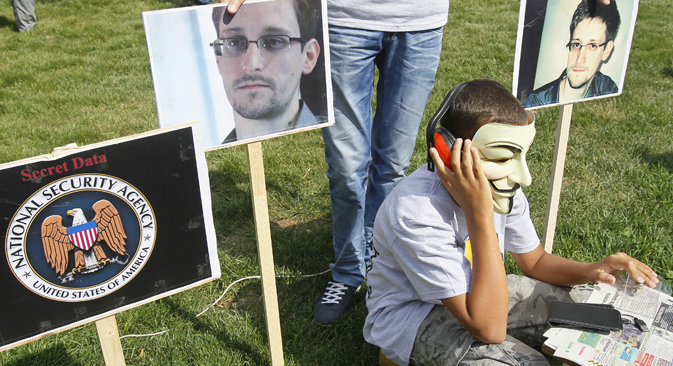 The Russian Federal Migration Service has up to three months to consider Snowden’s application. Source: Reuters

Former CIA employee Edward Snowden waits to hear if he will be granted political asylum in Russia, as local human rights activists and authorities express their support.

According to Vladimir Volokh, the head of the Russian Federal Migration Service's (FMS) public council, former CIA employee Edward Snowden – who filed an official application for temporary asylum in Russia on July 16 – may spend up to an additional seven days in the transit area of Moscow's Sheremetyevo Airport or at a center for refuge seekers.

Presidential press secretary Dmitry Peskov told Interfax that Snowden's application would be processed by the FMS, not by the Kremlin.

"He may spend up to a week there," Volokh, who formerly served as a deputy head of the FMS, said to Interfax on Wednesday.

FMS chief Konstantin Romodanovsky told Interfax on Tuesday that the agency had received Snowden's application for temporary asylum and would make a decision within the next three months.

Snowden fled to Hong Kong in May 2013 and then released classified information regarding U.S. special services' online surveillance activities.

He then flew to Moscow and has been in the transit area of Moscow's Sheremetyevo Airport since June 23. Snowden cannot fly out of Moscow because his U.S. passport has been revoked.

Russian President Vladimir Putin, speaking about the activity of ex-CIA officer Edward Snowden and the U.S. reaction to the situation, said that "interstate relations are more important that a dirty tattle on special services."

"We have our own tasks of developing Russian-U.S. relations. We will not act like other countries do. We are an independent country and our foreign policy is independent," Putin said.

"We warned Snowden that any activity that damages Russian-U.S. relations is unacceptable for us," Putin said answering a question from Interfax.

Discussing Snowden’s future intentions, the Russian president pointed out that Snowden had chosen his path independently. "As far as I understand, Snowden did not set the goal of spending his whole life in Russia. I cannot understand how a young man can choose this, but this is his choice," Putin said.

Meanwhile, some Russian human rights activists argue that it is time to lift restrictions on Snowden’s movements.

“He has a document that certifies his request for asylum. This certificate offers legal grounds for his migration registration."

Public Chamber member Anatoly Kucherena (L): "I put a direct question to him: Will you meet the condition for asylum that the Russian president has set for you? To this he answered: I will meet this condition". Source: AP

"He was not denied refuge right away and his application was not rejected. This means he may be allowed to go," the rights defender added.

Gannushkina said she did not doubt that Russian authorities would grant protection to Snowden.

"There is every indication that his request will be granted. There may be some individual conditions – for instance, he may be told not to get involved in politics – but he qualifies for the Convention and for asylum," she said. "I am also positive that he will not be extradited to the United States."

"Yet, I cannot understand why he has applied for temporary asylum rather than for refugee status. Both procedures are practically the same but refugee status provides greater opportunities. He has practically a 100 percent chance of receiving refugee status; he is in danger and his home country persecutes him for political reasons."

According to Public Chamber member Anatoly Kucherena, who talked to Snowden and helped him fill out his asylum application, Snowden reiterated in his request that his life is under threat and that he fears torture and persecution in the U.S.

“He wrote that he fears for his life and security, and that he could be subjected to torture or face the death penalty," Kucherena said in an interview aired on the Russian TV channel Rossiya 24 on Tuesday.

He said Snowden gave this particular answer when questioned by a Federal Migration Service official.

Kucherena added that Snowden promised to him that he would not engage in anti-American activities, if his application for temporary asylum were satisfied.

"I put a direct question to him: Will you meet the condition for asylum that the Russian president has set for you? To this he answered: I will meet this condition," Kucherena told Interfax.

Putin: U.S. has locked Snowden in Russia, scaring other countries

"Snowden told me that he decided to unmask the special services and started preparing for this a year ago," Kucherena said.

In his opinion Snowden is "ideologically motivated" and is a true human rights defender.

Kucherena noted that, while he should not be referred to as Snowden's representative, he is willing to continue providing him legal advice for free.

According to the head of the Russian State Duma foreign affairs committee Alexei Pushkov, by providing shelter to Snowden Russia is joining the list of countries advocating human rights and this improve its image at an international level.

"Providing refuge to Snowden will have a positive influence on Russia's image. This will show that Russia has joined the human rights protection [activity] at the international level," Pushkov said.

Based on materials from Interfax.